Copyright © 2022 Xiaoyan Bai, et al. This is an open access article distributed under the Creative Commons Attribution License, which permits unrestricted use, distribution, and reproduction in any medium, provided the original work is properly cited.

Various vanadates have been investigated to accelerate the development of advanced technologies, especially in the area of electronics. Amorphous FeVO4 was synthesized by the liquid phase precipitation method. This precursor was firstly discharged and then charged as cathode material of lithium second battery, in which the valence of two kinds of metals can be changed. Thermal analysis (TG-DTA), powder X-ray diffraction (XRD) and X-ray photoelectron spectroscopy (XPS) have been used for their characterization. The result revealed the existence of two pairs of redox couples, Fe3+/Fe2+ and V5+/V4+. The electrochemical investigation has shown that at higher potentials amorphous FeVO4 can react with 1, 1.5 and 2 mol Li, respectively.

Globally, driven by the social and economic progress, the newly sustainable, clean, and high-performance energy storage and conversion devices have been highly required [1]. The civilization has been wrapped by a huge number of smart electronics gadgets, especially built with different types of sensors and communication devices, which need a reliable, portable and durable energy storage device [2]. The main classes of electrochemical energy storages are batteries, fuel cells and electrochemical capacitors etc.

Among a variety of energy storage devices, Lithium ion batteries (LIBs), as a renewable power source, have been considered as one of the most important energy storage devices due to their high energy densities, environmental friendly technology, and long cycle and have occupied vast majority of portable electronics market in the last two decades [3]. To meet the recent demand for minimizing the size of portable electronics and electrifying transportation, it is urgent to develop efficient electrode materials for LIBs having a high reversible lithium (Li) capacity, an excellent rate capability, and cycling stability [4].

In a recent past, acceleration in the development of advanced technologies in the area of electronics, various vanadates have been investigated in many fields of application, which can be used as anode material, luminescence material, photocatalyst for degradation of organic pollutants and so on [5]. Many vanadates materials are vital components from an industrial viewpoint and have been proved to be promising due to their low cost, high chemical stability and excellent electrocatalytic properties [6].

As anode material, when discharged to voltage of lower than 0.2 V, FeVO4 can uptake 7 Li. M. Hayashibara et al. [7] studied the chemical lithiation characteristics of crystalline FeVO4. Either amorphous or crystallized FeVO4 displayed reversible capacities of 900 mAhg-1, however they both displayed poor capacity retention. It is found that at lower potentials crystal structure of FeVO4 collapsed and Fe was evident [8].

In this paper we wanted to prepare an amorphous precursor. The precursor was firstly discharged and then charged as cathode material of lithium second battery, in which the valence of two kinds of metals can be changed. FeVO4 as the cathode precursor has seldom been reported. In the range from 3.6 V to 2.0 V vs. Li+/Li, the initial discharge capacity of crystalline FeVO4 was about 70 mAhg-1 [9]. Crystalline FeVO4 will undergo structural amorphization, so the initially amorphous FeVO4 cathode is expected to overcome the irreversible structural change and have better capacity retention than crystalline FeVO4. On the other hand, if vanadium in (VO4)3- polyanion were electrochemically active, there would be more than one lithium intercalation which was favored for high capacity cathode. M. Sugawaraused amorphous FeVO4 as a positive active material and the discharge capacity of the amorphous FeVO4 maintained over 200 mAhg-1 after 50 cycles [10]. They thought the good cycling behavior of amorphous cathode might be attributed to the isotropic, flexible and low-density structures which suppress the deterioration of the cathode during charge-discharge cycles. Herein we prepared amorphous FeVO4 by the soft chemistry method and investigated the electrochemical properties of the amorphous FeVO4 at higher potentials.

The starting materials were ammonium metavanadate (NH4VO3) and iron nitrate (Fe(NO3)3·9H2O). The reaction consisted of mixing the stoichiometric amount of the two solutions and controlling the pH. The precipitate was separated by the centrifugation, washed with water and ethanol and then dried at 50 °C overnight. The precursor precipitate was finally calcined at different temperatures for 15 h to get the samples.

Thermal stability was analysed by TG-DTA experiments using a NETZSCH STA 449C apparatus. The precursor precipitate with weight of 12.171 mg was heated in air at a rate of 5 K/min. The power XRD was performed on a RIGAKU D/max-RB diffractometer using Cu Kɑ radiation. XPS data were obtained using an ESCALab 250 electron spectrometer from Thermo Scientific Corporation with monochromatic 150 W AlKα radiation. The base pressure was about 6.5×10-10 mbar. The binding energies were referenced to the C1s line at 284.8 eV from alkyl or adventious carbon.

The electrochemical properties of the FeVO4 were evaluated by using lithium metal as the anode. A slurry of active material (70wt%) with acetylene black (10wt%) and polyvinylidene fluoride (20wt%) was coated on Al foil to prepare the cathode. One mole LiPF6 in a 1:1 mixture with ethylene carbonate and dimethyl carbonate was used as the electrolyte.

Fig. 1 shows the TG-DTA curve of the precursor FeVO4·nH2O. Five distinct thermal phenomena appear on the DTA curve. The first endothermic peak is located at 97 °C, corresponding to a 12 % loss of water. There are three exothermic effects appeared at 250 °C, 331 °C and 456 °C. M. Touboul et al. have investigated the DTA curve of FeVO4·3H2O. Their results showed the exothermal effect between 230 °C and 260 °C corresponded to the decomposition of NH4NO3. The exothermic phenomena occurred at 330°C and 456 °C were attributed to a modification of the amorphous phase and the crystallization of the compound, respectively. And an endothermic peak appeared at 605 °C, which was different with M. Touboul’s work.

Fig. 2 shows the XRD pattern of the compounds annealed at different temperature. The compounds obtained at 50 °C and 300 °C were both amorphous. The compound annealed at 700 °C was crystalline and was identified as the triclinic FeVO4 (JCPDS 38-1372). We studied the electrochemical performance of the amorphous FeVO4 obtained at 300 °C as cathode precursor.

Fig. 1. TG and DTA curves of the precursor FeVO4·nH2O 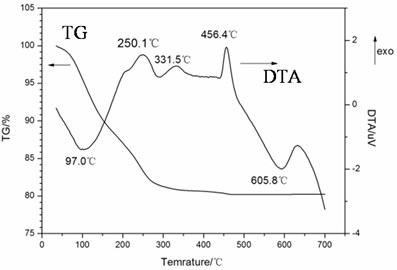 Fig. 2. The XRD pattern of the samples annealed at different temperature 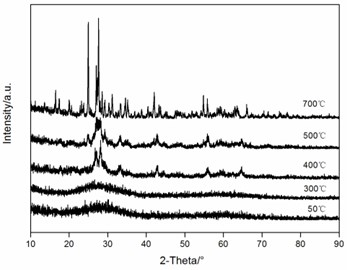 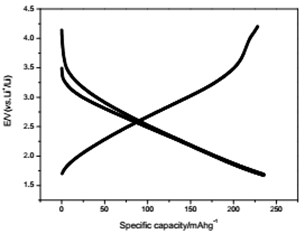 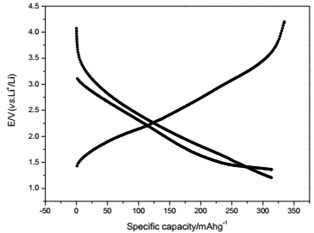 b) Charge/discharge curves for capacity-controlled discharge with 1.5 lithium embedded 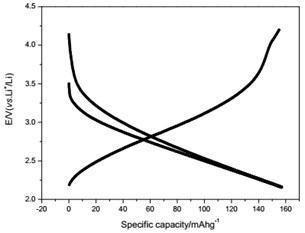 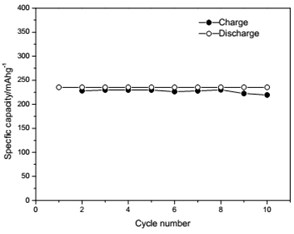 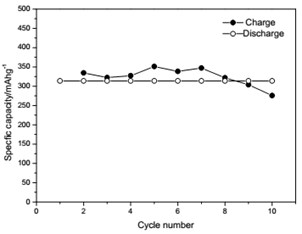 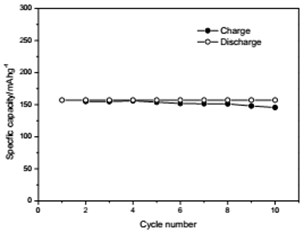 The cyclic voltammetry (CV) curve of amorphous FeVO4/Li cell in the range of 1.0-4.0 V at a rate of 0.25 mV/s was shown in Fig. 4. During the first cathodic scan (lithium intercalation) the voltammogram showed a broad peak around 2.6 V and an intense peak at 1.1 V. In the first anodic scan (lithium deintercalation) there were two broad peaks around 2.2 V and 3.2 V. In the 10th cycle, the two oxidation peaks (around 2.7 V, 3.4 V) and reduction peaks (around 2.0 V, 3.0 V) became lower and broaden. So the first cycle maybe an activated process. The CV featured two pairs of oxidation-reduction peaks, which was probably associated with both redox couples, Fe3+/Fex (x=+2, 0) and V5+/Vy(y=+4, +3). 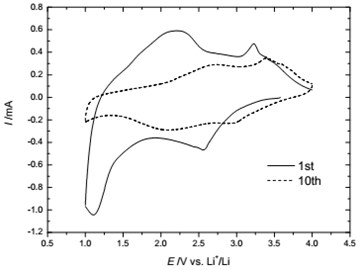 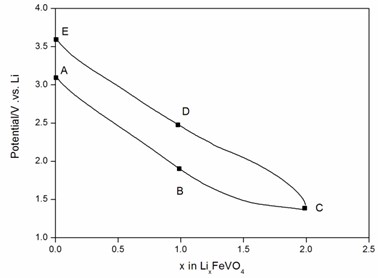 Fig. 6. The XPS spectra of different LixFeVO4 compositions: a) Fe 2p and b) V 2p 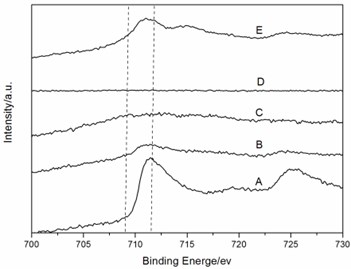 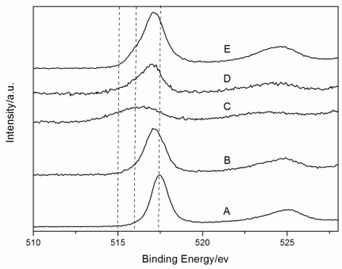 In this paper we focus on the reverse lithium embedding of ferrovanadate and try to verify whether double valence transformation occurs during the reaction of ferrovanadate with lithium. The chemical composition of the amorphous form was first confirmed by precipitating the amorphous form by the liquid phase method. Charge and discharge experiments demonstrated that amorphous ferrovanadate can react with 1, 1.5 and 2 lithium at higher potentials with discharge capacities of 157, 235 and 314 mAh g-1, respectively, and can remain largely stable after 10 weeks of cycling. The capacity and energy density of the amorphous FeVO4/Li cell can reach 314 mAhg-1 and 618 WhKg-1, respectively. The existence of two pairs of redox couples in amorphous FeVO4, Fe3+/Fex (x = +2, 0) and V5+/Vy(y = +4), was demonstrated by CV and XPS measurement. Therefore, the amorphous FeVO4 could be considered as potential cathode precursor for lithium second battery.