Copyright © 2022 Jingxiu Ling, et al. This is an open access article distributed under the Creative Commons Attribution License, which permits unrestricted use, distribution, and reproduction in any medium, provided the original work is properly cited.

TBM roadheader is widely used in various types of hard rock tunnel construction. A cutter head is a vital digging component of a roadheader. Moreover, the efficiency and safety of construction are directly influenced by the effectiveness of the roadheader work [1, 2]. By completing a dynamic model of the shield machine, Xian Hong Li et al. and Zhang K et al. analyzed some key parameters such as rotation and torque inside the system and found the relevant key issues [3, 4]. The vibration model of TBM Cutter head system was constructed by Jing Yang. Based on numerous scientific researches, the relationship between relevant digging performance and dynamic characteristics is analyzed in conjunction with the actual working conditions [5]. Ling J and other researchers have launched a prediction initiative for excavation parameters of roadheader under typical mixed working conditions [6] Tianmin Guan et al. analyzed the force characteristics of Cutter head and tool separately after the establishment and calculation of Cutter head Finite element model [7]. In the construction of Cutter head model of shield structure by Yi-Min Xia et al. the Cutter head modal analysis was realized by finite element method [8]. Zhao Zhenwei et al. implemented the analysis of the mechanical properties of Cutter head of different structural types and found the method to improve the overall stiffness of hard rock cutter [9].

In this paper, the TBM consists of Cutter head, main drive, thruster, Cutter head support device, propulsion cylinder and other parts. The Cutter head diameter selected in this paper is 8416mm, and the material selected is Q345 steel. 3D modeling of the Cutter head as a whole is carried out using PRO/E software, as shown in Fig. 1. Among them, the core working part of the whole machine is TBM Cutter head, and the internal structure and connection relationship of the system are quite complicated. In combination with the harshness of the actual surrounding geological environment of the TBM and the variability of the tunneling parameters, the system is subjected to spatially distributed loads and vibration problems are particularly prominent, leading to abnormal structural failures. 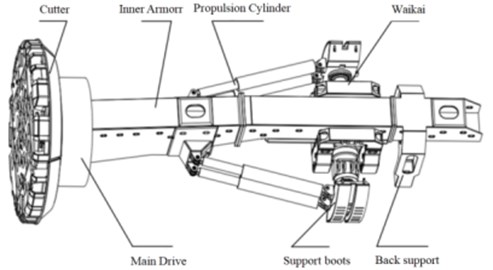 Modal analysis is to solve the vibration characteristics under free vibration, and the main parameters for the solution are the inherent frequency and the modal vibration pattern. A harmonic response analysis is used to solve the structural response of the structure under the action of periodic load and the dynamic characteristics under different frequency loads, which provides theoretical support for subsequent optimization. The calculation of harmonic response analysis is carried out by Modal superposition method with the same boundary constraints This means that the full restraint treatment is made near the lowermost flange of the hard rock cutter, and the axial force, radial force, overturning moment and torque values under the maximum thrust condition are added to the external load for analysis. Depending on the hard rock cutter first six orders of inherent frequency and vibration type, the harmonic response is analyzed in the frequency range of 66-166 Hz [11], and the first six inherent orders of frequency are included, and the response is calculated in 100 sub-steps. And define the axis, axis and axis of cuterhead as shown in Fig. 2. 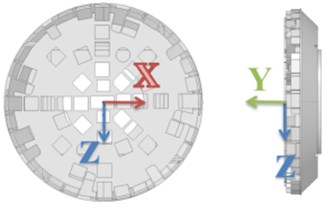 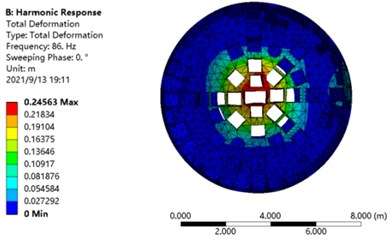 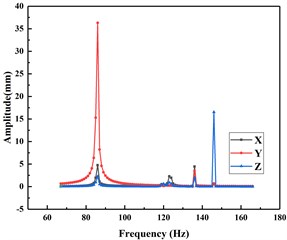 For ensuring the reasonableness and accuracy of the test results, the selected parameters need to be noted for the effects of parameter variations on the vibration characteristics of the finite element simulation model. The three-factor, three-level orthogonal test scheme was adopted, and the orthogonal experimental factors were prepared Table 1.

In this orthogonal experiment design, the vibration amplitude of axis is taken as a reference, and the primary and secondary difference and strength of the conditions affected by the parameters are determined as the goal.

5. Analysis of the influence of cutter head vibration response parameters

The vibration model of Cutter head is established based on ANSYS finite element simulation platform, and through the -axis translational vibration of Cutter head -axis under the maximum thrust condition, the following conclusions can be drawn.

1) The vibration of Cutter head is maximum at 86 Hz resonance point under the maximum thrust condition, and the vibration mainly occurs in -axis direction.