Copyright © 2019 Jingxiu Ling, et al. This is an open access article distributed under the Creative Commons Attribution License, which permits unrestricted use, distribution, and reproduction in any medium, provided the original work is properly cited. 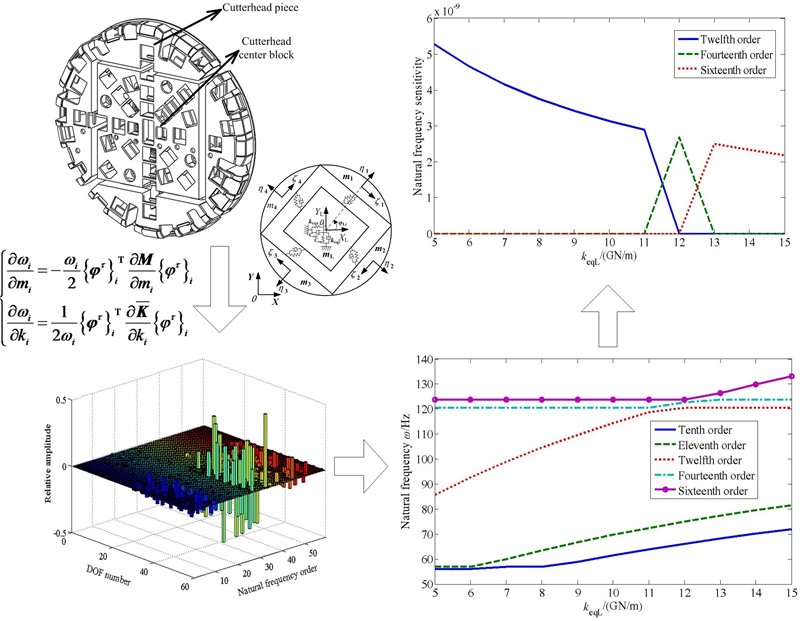 Tunnel Boring Machine (TBM) is a kind of advanced engineering equipment used in various tunnels, which is widely applied to the urban subways, river-crossing or sea-crossing tunnels and national defense tunnel excavation. Compared with other excavation methods, TBM has the advantages of fast tunneling speed, environmental protection and high efficiency. Cutterhead system is the core component of rock breaking, which endures the reverse impact forces of rock breakage duo to the complicated geological conditions. As a result, the structural vibration and various components failure are caused by the impact forces, such as the cracking of cutterhead panel, main bearing failure and cutter seat cracks [1, 2]. Therefore, the cutterhead strength, system dynamic performance and fatigue life requirements are very high, and it is necessary to analyze the system vibration characteristics in the structural design stage. The natural characteristic is the research foundation of vibration analysis, and analysis of different parameters on the natural frequencies and sensitivity, can provide a basis for system parameters matching.

Scholars have done a lot of research on the TBM cutterhead system design, and encouraging achievements have been obtained. As early as 1980s around in overseas, Hopkins [3] and Samuel [4] et al. studied the variation rule of rock breaking loads at the tunneling field and laboratory, through the force sensors installed on the cutter shaft. A novel method named Rock Joint Rate (RJR) for predicting the penetration rate (PR) of TBM in hard rocks was proposed and huge amounts of engineering data was utilized to validate the proposed model [5]. In recent years, Jamal Rostami, an international well-known TBM expert, presented many cutterhead design and performance prediction models for hard rock TBM combined with some engineering cases, which can provide reference for cutterhead structural design and performance analysis [6, 7]. In domestic, some key technologies involved in the TBM cutterhead design were presented and the further research issues of cutterhead design were proposed by Liu et al. [8]. A free-face-assisted rock breaking method was proposed for improving the rock breaking efficiency, and then a multi-stage TBM cutterhead structure was designed and series of proof-of-concept tests were carried out to validate the proposed method [9]. Xia, Tan et al. studied the rock breaking characteristics and impact loads of different cutters, using the discrete element method, finite element method and experimental method [10-12]. Besides, some scholars studied the rock cutting forces, disc cutter wear performance and rock breaking efficiency with different kinds of cutters by the means of simulation and rotary cutting test [13, 14]. Similarly, Han, Xia et al. established a TBM excavation finite element model to investigate the dynamic responses of cutterhead loads, and the simulation results were validated by a tunneling test [15]. Also, the cutterhead loads and tunneling parameter characteristics were directly studied using the theoretical derivation and numerical methods, which can provide guidance for TBM construction parameters matching [16, 17]. Moreover, Sun, Huo et al. has been done a lot of research work in the aspects of TBM cutterhead system vibration characteristics, tunneling field test, electromechanical coupling vibration model as well as the structural performance evaluation, and some useful results were achieved, which also can provide reference for TBM cutterhead structural anti-vibration design and parameters matching [18-21].

The rotary torque is transmitted to the pinions by multiple motors through the respective planetary gear reducers when the TBM tunnels. Then an inner ring gear fixed with the cutterhead flange is derived by the pinions, so as to drive the cutterhead. For a cutterhead with diameter over 8m, the cutterhead plate body is generally made up of several pieces, and each piece is connected with the center block by welding and bolts. The typical split-cutterhead structure with medium square is shown in Fig. 1. A multi-degree of freedom coupling vibration model of a split-cutterhead system has been established, based on the lumped mass method, with the coupling vibration model of cutterhead piece and center block showing in Fig. 2 [18]. For the other structural vibration models, see reference [18], and the detailed dynamics differential equations are also presented in this literature. 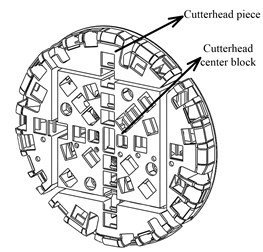 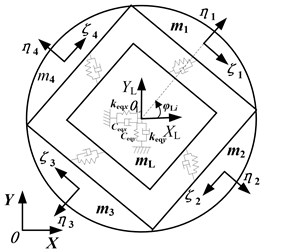 For an undamped free vibration equation, the characteristic equation is:

It is supposed that the symmetric matrix , then Eqs. (1) can be expressed as:

Eqs. (3) is took the partial derivative of physical parameter , and the expression can be obtained as follows:

Since the matrix is a symmetric matrix, the Eqs. (2) can be transposed as follows:

A normalized mode vector is introduced, which is satisfied the following expression:

The above expression is the sensitivity of the system th eigenvalue to physical parameter .

Eqs. (9) is substituted into Eqs. (8), and the sensitivity expressions of the th eigenvalue to the mass parameter and stiffness parameter can be described as follows, respectively:

4.1. Overview of an actual cutterhead system

This case study object is based on a water tunnel project in northwest Liaoning province, China. The tunnel net section diameter is 7.51 m, and the TBM excavation diameter is 8.53 m, with the TBM cutterhead system parameters showing in Table 1. The TBM cutterhead is composed of four cutterhead pieces and a center block, and the main drive system is driven by an external meshing style structure. The driving pinions are connected with a short axis, and the whole machine weight is supported by the cutterhead front bottom support and support boots together, so the structural stability is high.

4.2. The natural frequencies and vibration modes of cutterhead system 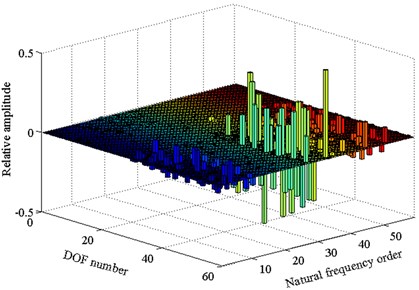 4.3. Influence of cutterhead supporting stiffness to natural characteristics and sensitivity

Eqs. (12) is substituted into Eqs. (11), then the sensitivity expression of the th natural frequency to the cutterhead piece tangential supporting stiffness can be obtained:

From the above results, it can be seen that the natural frequencies increase with the value of cutterhead piece tangential support stiffness, and this stiffness mainly affects the system 10-20th order frequencies. Moreover, to illustrate the system vibration characteristics variation law, the A point ( 3.61 GN/m) is taken as an example. When the value of increases, the natural frequency curves of the fifteenth and sixteenth order coincide at point A, and the two order mode shapes are the cutterhead translational vibration mode, as well as the cutterhead and inner ring gear translational overturning coupled vibration mode before point A, respectively (as shown in Fig. 4(c) and Fig. 4(d)). Then the natural frequency sensitivity curves change suddenly after point A, and the mode shapes are synthesized into the cutterhead, inner ring gear translational and motors, pinions torsional coupled vibration mode, which indicates that point A is a sensitive point of the cutterhead piece tangential support stiffness parameter. At this point, with the value change of stiffness, the modal mutation and mode jumping occur. Some other stiffness sensitive points appear in Fig. 4, which include the natural frequency curve crossing points or sensitivity catastrophe points. Near these points, the vibration mode analysis principle is similar, and the mode jumping phenomenon also occurs when the stiffness value is near the sensitive points. 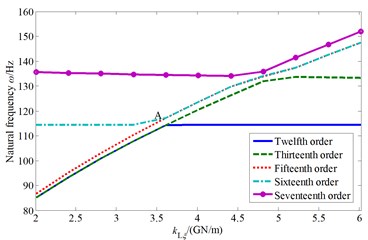 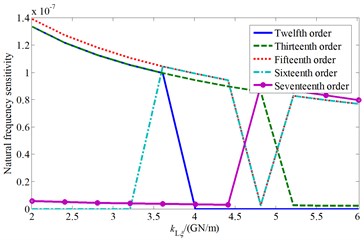 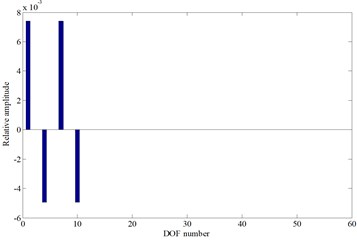 c) The fifteenth mode shape before point A 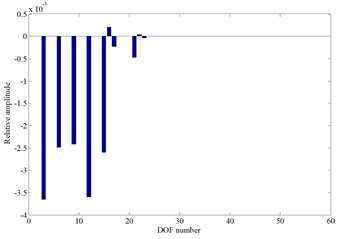 d) The sixteenth mode shape before point A

Then the influence curves of the cutterhead center block support stiffness on the natural frequencies and corresponding sensitivity are presented after numerical calculation in Fig. 5. 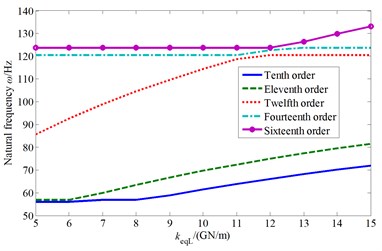 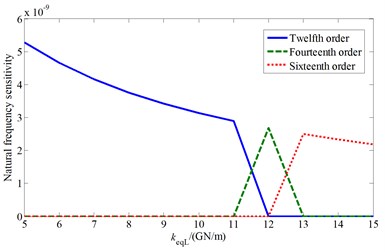 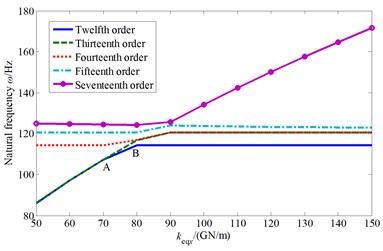 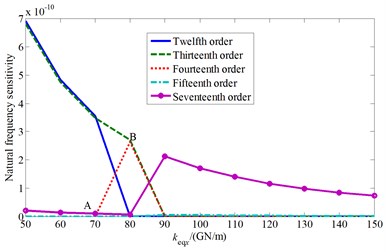 4.4. Influence of cutterhead mass parameter to natural characteristics and sensitivity

The mass matrix is used to take the partial derivative of cutterhead piece mass , and then substituted into Eqs. (11). So, the sensitivity expression of the th natural frequency to the parameter can be obtained as follows:

Also, the influence curves of the cutterhead piece mass on the natural frequencies and corresponding mode shapes are drawn, as shown in Fig. 6.

From Fig. 6 it can be showed that the cutterhead piece mass mainly affect the system 10th-20th order frequencies and the natural frequencies decrease with the increase of cutterhead piece mass. The fourteenth and fifteenth order natural frequency curves intersect at point A ( 13.92 t), and the two order mode shapes are the cutterhead and inner ring gear translational vibration mode, as well as the cutterhead translational vibration mode before point A (as shown in Fig. 6(c) and Fig. 6(d)), respectively. Then the two order mode shapes exchange after point A, and the natural frequency sensitivity curves also change suddenly.

The sensitivity expressions of the th natural frequency to the cutterhead moment of inertia IL can be also derived, as shown in Eq. (17):

And the affected cutterhead system natural frequencies and sensitivity curves are presented in Fig. 7.

As can be seen from Fig. 7, the cutterhead moment of inertia mainly affects the system ninth to eleventh order frequencies.

Fig. 6. The influence of cutterhead piece mass to natural characteristics 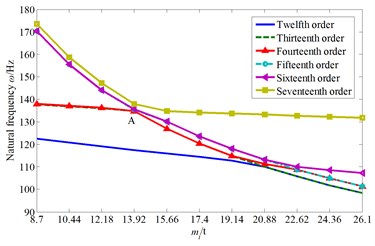 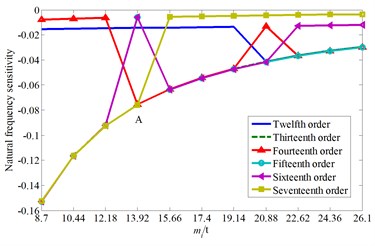 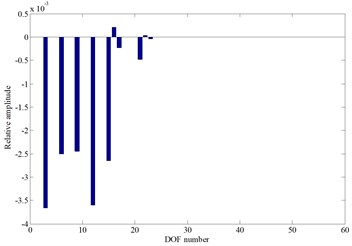 c) The fourteenth mode shape before point A 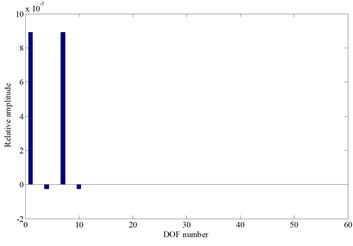 d) The fifteenth mode shape before point A

Fig. 7. The influence of cutterhead moment of inertia to natural characteristics 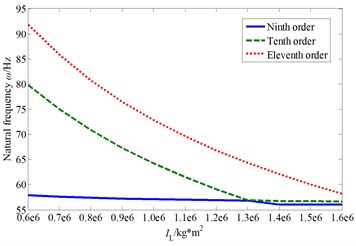 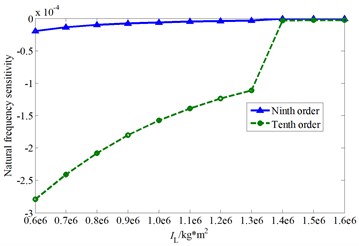 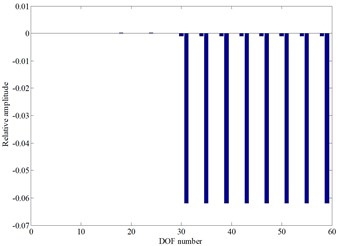 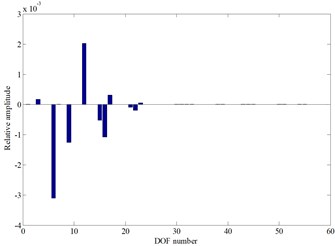 2) An actual cutterhead system is taken as an example, the influence of the cutterhead support stiffness on each natural frequency and sensitivity is analyzed. The results show that the cutterhead support stiffness mainly affect the 10th-20th order frequencies, and with the stiffness value change, it occurs many crossing points or bifurcation points in the frequency curves. Near these points, the sensitivity curves change suddenly, and the mode shapes also change, to cause the mode jumping phenomenon. It is necessary to keep away from the stiffness sensitive points in actual design, to avoid the system vibration response uncontrollability.