Copyright © 2022 Weipeng Zhao, et al. This is an open access article distributed under the Creative Commons Attribution License, which permits unrestricted use, distribution, and reproduction in any medium, provided the original work is properly cited. 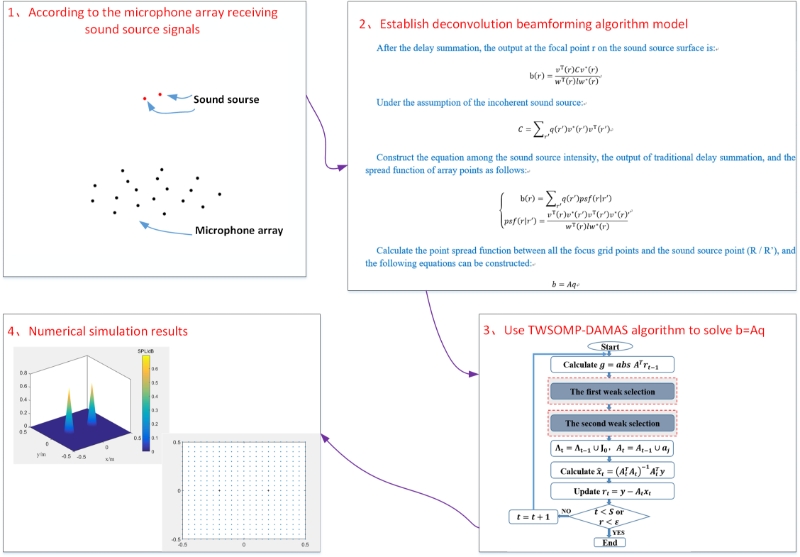 Based on the above content, this paper proposes a deconvolution sound source identification algorithm based on twice weak selection orthogonal matching pursuit (TWSOMP-DAMAS). Through twice-weak selection, the initial atom selection set is steadily screened out, and the wrong atoms are screened out. After a certain number of iterations, the range of the real sound source is gradually narrowed, so as to find the specific location of the real sound source. The algorithm proposed in this paper can ensure that the algorithm has high computational efficiency, reconstruction accuracy, and spatial resolution under the premise of unknown sound source sparsity.

After the delay summation, the output at the focal point r on the sound source surface is:

Under the assumption of the incoherent sound source, the sound pressure cross spectrum matrix can be expressed as:

To solve the problem of over-reliance on the sparsity of sound source, this paper proposes an improved algorithm of orthogonal matching pursuit algorithm to solve the above linear equations; it can realize the accurate reconstruction of sound source position under the condition that the sparsity of sound source is unknown. Through the first weak selection criteria, the initial atom set is screened, and the wrong atoms are deleted. Under normal circumstances, there are still many wrong atoms after the first weak selection. Therefore, it is necessary to test the reliability of the previously selected atoms, then make the second weak selection to delete the chosen previously wrong atoms from the current atom set, and gradually delete all the false atoms in the form of iteration to get the final result. The following are the criteria for two weak elections.

The first weak selection criterion: the index of the inner product of the searched column is expanded from the original single maximum value to the number satisfying the condition of threshold coefficient α multiplied by the maximum internal product value.

where is the value of the least square solution in ascending order.

Given the × dimensional point spread function matrix , the column vector b of the dimensional beamforming output, the number of iterations 10, and the threshold coefficient 0.8.

Step 3: Update atom support set: , update support matrix , if (that is, no new atoms are selected), stop iteration and go to step 9.

Step 5: After ranking the values in the least square solution from the largest to the smallest, calculate the change rate between two adjacent values, delete the values with the largest change rate in , delete the column numbers corresponding to these values from the atomic support set , and update the atomic support set and the support matrix again.

Step 6: The least square solution of after calculating the updated atomic support set:.

Step 8: , if , go back to step 2 to continue iteration, if or residual reaches accuracy, stop iteration and enter step 9.

Step 9: The reconstructed has a non-zero term at , the values are obtained in the last iteration, and the rest positions are 0.

After many simulations, the TWSOMP-DAMAS algorithm can get a good reconstruction effect when the threshold coefficient parameter is 0.8, and the iteration number is 10 times. 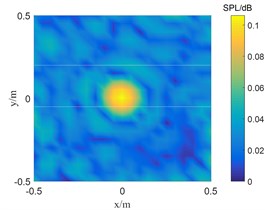 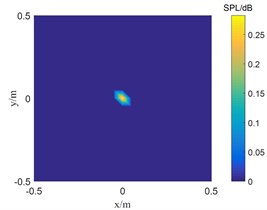 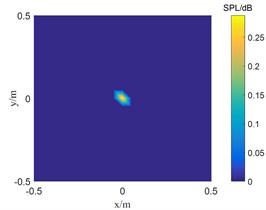 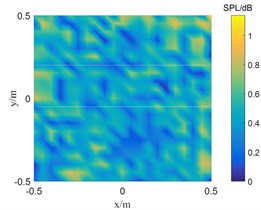 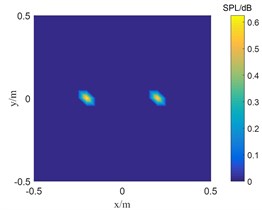 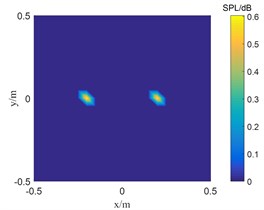 4.2. Robustness verification of the algorithm

To further verify the influence of signal-to-noise ratio on TWSOMP-DAMAS algorithm, the frequency is 3500 Hz, and the distance between the microphone array and the focal plane of the sound source is 0.8 m m. The recognition results of single sound source under the conditions of 15 dB, 5 dB, and 0 dB are studied. 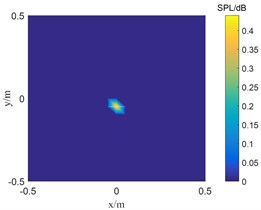 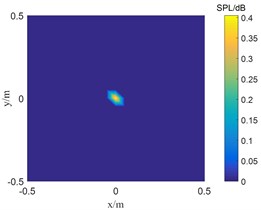 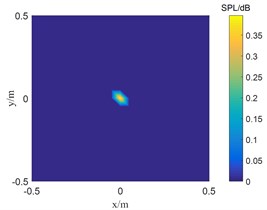 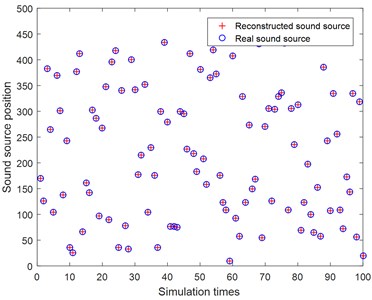 This work was supported by the Natural Science Basic Research Program of Shaanxi (Program No. 2022JM271) and the Postdoctoral research project of Shaanxi Province (Grant No. 2018BSHEDZZ10).