Skull base flexion and its influence on chewing

Copyright © 2022 Maria Aparecida Assis Carvalho. This is an open access article distributed under the Creative Commons Attribution License, which permits unrestricted use, distribution, and reproduction in any medium, provided the original work is properly cited.

Skull base asymmetries can occur in the intrauterine period, manifesting from birth as craniofacial asymmetries and should be investigated both in the maxilla and mandible and in the craniofacial region, as they are related to the base of the skull. The objective of this study was to explain that treatment using Craniofacial Biodynamics (CFBD) enables symmetrical craniofacial growth, being recommended from three to six years of age, when the processes of skull base remodeling cease. This study was based on exploratory bibliographic research, aiming at a better understanding of the concepts presented in this therapeutic approach, to verify the influence that such concepts exert on treatment through CFBD. It was evidenced in this research that these asymmetries may be corrected, or even minimized through the CFBD, which relates the ontogenetic development of the skull base with orofacial development.

Signs of craniofacial asymmetry in the primary dentition can be seen around three years of age, when the bone structures do not allow dental contacts with symmetrical lateralities and the same amplitude, demonstrating that the joint cavities are not symmetrical. In this case, the inclination of the occlusal plane may also be present, proving the asymmetry of the sphenoid [1].

By symmetrizing the bone bases and masticatory function as early as possible, we allow the neuronal network of such associated orofacial dysfunctions to be “swapped”, leading to a new remodeling of the skull base, engendering new landmarks in the cranial skeleton, thus releasing its realignment, with rapid and stable results after treatment [2], [3].

Through studies in the areas of Dentofacial Orthopedics, Osteopathy and Anthropology, the French researcher Marie-Josèphe Deshayes, carried out an investigation in forty-three children's skulls intentionally deformed in Peru, in the year 2005. From this research, was developed the theory of Craniofacial Biodynamics (CFBD) which proposes an early treatment for craniofacial asymmetries.

CFBD behaves as the interface between the primary organization plan of the cranial base and the environmental conditions of development. Hence, it is necessary to understand the correlation between the growth kinetics of the bones of the skull base (occipital, sphenoid and temporal) and the remodeling that occurs in these bones [1].

Throughout ontogenesis, cranial bone pieces grow to the intervention of microscopic cellular currents, their macroscopic trace can be seen in the sutures; these fit into each other through a very specific beveling. By means of the study of sutures, it is possible to define kinetic axes and pivots of microscopic cellular currents. Within a grouping of different kinetic units, fusions, reinforcements or inhibitions are carried out between various cell vortices and these interactions modify the growth direction of the models that support them. This is what happens at the level of the bone complex at the base of the skull. This study refers to vorticity units integrated in the occipital, sphenoid, temporal and, subsequently, in the maxilla and mandible [1].

It is necessary to differentiate the potential for cell multiplication which causes growth and increases the mass, from what makes the bone piece evolve. Therefore, it is necessary to be a morphologist as well as a functionalist with regard to early treatment. CFBD presents a set of regulated means and procedures that tend to re-harmonize the imbalanced skeleton. The correct way of proceeding requires know-how, dexterity and complex knowledge [1].

The methodology of this study was based on exploratory bibliographic research, aiming at a better understanding of the concepts presented in this therapeutic approach of Craniofacial Biodynamics, to verify the influence that such concepts exert on the early treatment of craniofacial asymmetry.

This article aimed to explain that treatment using CFBD enables early symmetrical craniofacial growth, being recommended from three to six years of age, when the processes of remodeling the base of the skull cease.

2. The growth of the base of the skull bones

The skull base is the structural basis of many aspects of craniofacial architecture, being the first region of the skull to reach adult size. Their results indicate that there is a great integration between the skull base and the neurocranium during growth [4].

The dental arches belong to bone units, maxilla and mandible, these have an anatomical connection with the base of the skull: the maxilla is linked to the spheno-ethmoid-frontal unit and the mandible is linked to the occipitotemporal unit (Fig. 1) [1].

Fig. 1. Influence of base cranium bones on the face and on occlusion 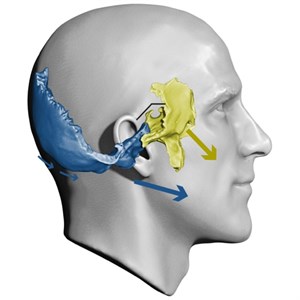 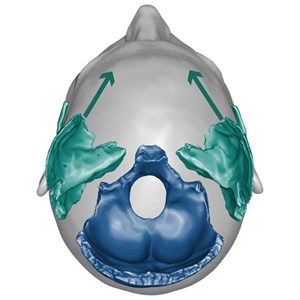 This flexion (Fig. 2) occurs more in the fetal period, continuing rapidly after birth until two years of age, ending its flexion at six years of age when the first permanent molar erupts [5]. 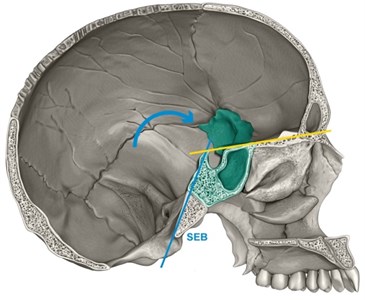 In phylogeny, the closing of the sphenoid angle and the opening of the angle of the temporal petrous pyramids (Fig. 3) are part of the counterclockwise “occipitotemporal rotation”, in lateral view, characteristic of the hominization of the skull, occurring from birth to the first steps, under the influence of the cervical muscles ensuring the verticalization of the head. Simultaneously with the occipitotemporal rotation, the closure of the sphenoidal angle and an opening of the angle formed by the petrous pyramids of the temporals next to the occiput [6].

With reference to the temporal bone, as the base of the skull flexes, the frontalisation of the temporal petrous pyramids increases, positioning the glenoid cavities (and temporomandibular joints) more forward. At the same time, the remodeling in the Antero External Rotation (AR/ER) of the temporal transforms the bone and causes the glenoid cavity to be constructed, preferably posteromedian and sub squamous; the squamous portion rotates forward and slopes laterally to the outside (AR/ER) [1]. 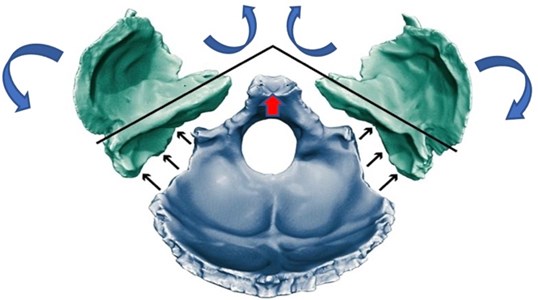 2.1. Influence of the occipitotemporal unit on the mandible

The occipitotemporal unit affects the position of the mandible (in relation to the maxilla), and its functional capacity to exert lateral displacements. The TMJ is composed of the mandible, adjusted to the mandibular fossae located in the temporal bones [1].

If asymmetry occurs in the flexion process, it also reaches the occipitotemporal unit. As a result, the temporal bones will not present a strictly symmetrical vorticity, therefore, the remodeling of future temporomandibular joints (TMJ) will not be symmetrical [8].

The ears sit on the temporal bone, in the anatomical region of the TMJ, and if they are asymmetrical, they indicate intertemporal cranial asymmetry. The asymmetrical positioning and orientation of the glenoid cavities before the age of 3 years poses a risk of inducing asymmetrical masticatory displacements that will secondarily create an asymmetrical remodeling of the mandible (Fig. 4) [7]. 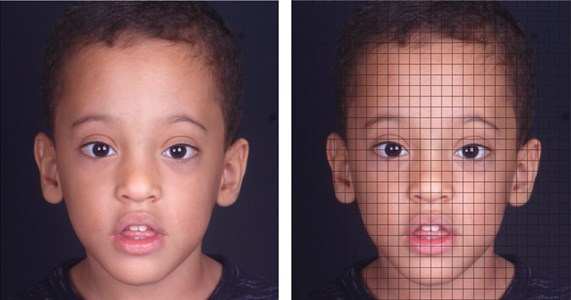 Imbalanced mandibular function, that is, lateralities with asymmetrical width and displacement results by accelerating the process of temporal asymmetry, leading to mandibular structural asymmetry.

It was evidenced through this bibliographic research that those craniofacial asymmetries may be corrected, or even minimized through CFBD when performed during the deciduous dentition.

The CFBD relates the ontogenetic development of the skull base to orofacial development, reinforcing that skull base flexion influences the masticatory process as a whole.

I thank everyone who directly and indirectly contributed to the realization of this scientific article, mainly to graphic designer Leonardo Rubira, to English teacher Luiz Henrique Rezende and to professor Dr. Rogério de Abreu Silva.