Copyright © 2022 Aidé Terán, et al. This is an open access article distributed under the Creative Commons Attribution License, which permits unrestricted use, distribution, and reproduction in any medium, provided the original work is properly cited.

During the COVID 19 pandemic, the general population suffered from high degrees of stress, the consequence of which was an increase in myofascial pain syndrome. This inflammatory ailment which affects soft tissues causes pain, muscular rigidity, and modifies posture due to hyperactivity. A state of muscular ischemia leads to structural and chemical changes, and to variations in saliva’s electrical conductivity. The objective of this research was to measure the changes in pH and electrical conductivity of saliva samples, and to use these as biomarkers during therapeutical Maxillary Functional Orthopedics (Planas’ Simple Indirect Tracks and Simões Network 20). All the subjects that took part in the study evidenced changes in the beforementioned biomarkers, as well as clinical improvement of their symptoms. 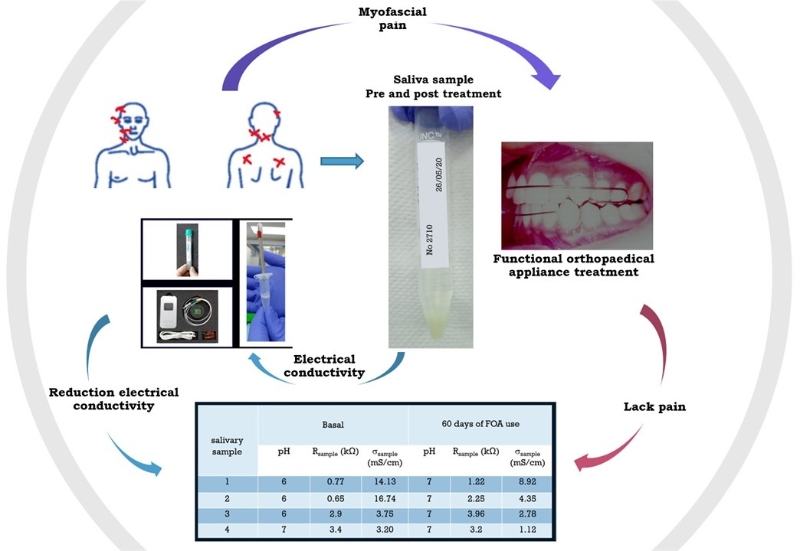 Saliva is a bodily fluid which can be of great use in the diagnosis of many systemic alterations. This method of diagnosis possesses the advantage of being non-invasive, and samples are easy to obtain and store [1]. Muscular activity generates Reactive Oxygen Species (ROS) to a greater or lesser extent, which can lead muscle fibers to a state of fatigue during strenuous contraction [2]. The Myofascial Pain Syndrome (MPS) is a swelling of soft tissues, which is characterized by perceived pain. There are several theories that explain the irritability caused by MPS and it’s trigger points [3], none the less, when an individual is in a state of anxiety, depression, and somatization, this leads to the overcharge of the mandibular elevator muscles, which, in turn, causes pain [4]. On the other hand, it is known that alterations of the temporomandibular joint and muscle pain are highly correlated to imbalances in dental occlusion, in which case, the main symptom will be the pain of an organ that hasn’t been functioning correctly [5]. To rehabilitate the whole Stomatognathic System it is necessary to recover functionality through occlusal equilibration. Although there is evidence of variations in the scale of perceived pain when patients receive some form of treatment, [6] it is the goal of this study to measure more objectively the presence and control of inflammatory alterations by measuring the pH and electrical conductivity of saliva. Electrical conductivity is a solution’s capacity to conduct electric current. This property of aqueous solutions depends on the presence and concentration of ions; a higher ionic concentration leads to a higher electrical conductivity. It is important to mention that if the conductivity increases, the resistance decreases and vice versa.

For this preliminary, longitudinal, and descriptive report, four female subjects between the ages of 30 and 58, with a median age of 43, were recruited; all of which suffered from Myofascial Pain Syndrome (MPS). All subjects were briefed and willingly accepted to participate and donate their saliva for the study. All subjects were given the McGill questionnaire to determine their level of perceived pain. On the questionnaire’s image they marked with a red cross the places where their pain was located (Fig. 1). To obtain a biological control for the presence of pain, the subjects’ saliva’s electrical conductivity was measured. Since all subjects reported taking NSAIDs to relieve the pain, they were asked to stop taking any kind of pain medication 24 hours before their saliva samples were taken. The saliva was collected in the morning, and the subjects were required to not eat or drink anything during the two hours prior to their samples being taken. They were also required to not use any kind of cream, makeup, to not chew bubblegum, nor brush their teeth. The pH was measured with Merck® brand reagent strips. The saliva sample (30 ml) was collected in a plastic tube, marked, and stored at a temperature of –20 °C. To measure the saliva’s electrical conductivity, the samples were progressively warmed until they reached a temperature of 25 °C. The saliva was placed in a cell containing gold and platinum discs measuring 0.0919 cm. The ends of the electrode were connected to an IVIUM® brand “Pocket Start” potentiostat (Fig. 2). To evaluate the electrical conductivity in a laboratory, the resistance of the samples, which is the opposite of conductivity, was measured. Resistance is measured in ohms.

Fig. 1. Most frequent location of the pain, as marked by the test subjects on the McGill questionnaire 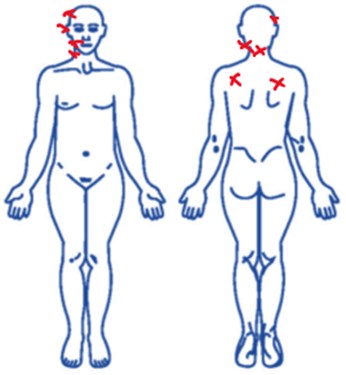 Fig. 2. a) Platinum and gold discs; b) cell containing the discs and the saliva sample; c) Potentiostat used, connected to a laptop computer 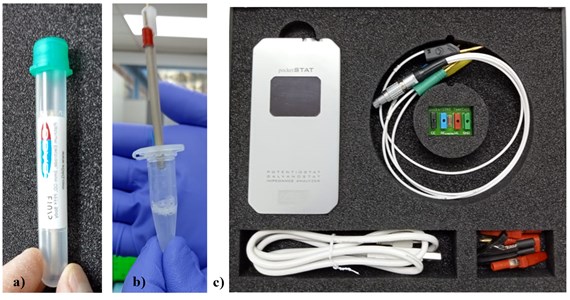 As to the therapeutical method used to relieve the pain, a Functional Orthopaedical Appliance (FOA) known as Planas’ Simple Indirect Tracks (PSIT) was used by the subjects for the first 30 days of the study. Afterwards, as a second pre-stimulus phase, the subjects used a Simões Network 20 (SN20) brace built to the precise specifications of the author [7]. Both the subjects’ perceived pain and their saliva’s electrical conductivity were measured before starting the Functional Orthopaedical Treatment, and 60 days later.

All the subjects of the study displayed muscular tension on their masseter, temporal, and trapezius muscles, as well as trigger points. Neck pain, headache, and general discomfort were also reported symptoms. Irregularities in mandibular, head, and neck postures were diagnosed. As to the perceived pain questionnaire, all subjects reported their perceived pain before starting to use the Functional Orthopaedical Appliance (FOA) to be unbearable. The pain was reported to be located on the neck, back, head, and masseter and temporal muscles. 8 days after beginning to use the Planas’ Simple Indirect Tracks (PSIT), all test subjects reported a 50 % reduction in their perceived pain; and after 60 days using the FOA, the subjects took the McGill questionnaire a second time and reported a complete absence of pain and reported not needing to take NSAIDs for relief. As to the electrical conductivity of the saliva samples, a significant reduction of electrical conductivity was observed (Table 1).

Table 1. pH values and electrical conductivity in saliva simples before starting to use the FOA and after 60 days of use

A-d and C fibers are nociceptors at a muscular level known as group III and IV fibers. Each of these muscular afferents can respond to more than one mechanical, thermal, or chemical stimulus to detect a wide array of sensory stimuli. The specific sensory form of the group III and IV afferents can be associated with a variety of ionic channels of the membrane, such as the proton channel [8], vanilloid 1 (TRPV1), which is a very important receptor for sensory physiology and pain [9]. There are chemical mediators, such as bradykinin, substance P, and prostaglandins, such as PGE2, which cause pain, and, additionally, maintain a direct correlation between the perceived intensity of the pain and the concentration of K ions [10]. This can be observed in the results of the present study, in the electrical conductivity of the saliva samples before starting the orthopaedical treatment, because electrical conductivity depends on the concentration of ions [11]. Also, chemical, or structural changes produce variations in electrical resistance. On the other hand, ASIC (Acid Sensing Ion Channels) are channels that are inactive in physiological pH and become active when the pH decreases [12]. In this study we observed that the initial saliva samples had a slightly acidic pH, which is a common symptom of ischemia [13]. Even when the pH variations were minimal, a tendency towards neutralization was observed after 60 days of Functional Orthopaedical Treatment (see Table 1).

As to reported pain, the improvement in all the subjects was notable during the first 30 days using the Planas’ Simple Indirect Tracks (PSIT). During the following 30 days, the subjects used the SN20. After 60 days, when the subjects were given the McGill questionnaire a second time, all patients reported having no pain in any of the areas they had marked initially.

In a study conducted with patients who suffered from pain in the masticatory muscles, anxiety levels were measured before and after the COVID 19 pandemic using the Generalized Anxiety Disorder 7 (GAD-7) questionnaire. Anxiety levels rose during the pandemic [14], and this also happened among the participants of the study who reported high levels of stress due to multiple causes such as losing their jobs or being in lockdown. It has been determined that circumstances such as being under high levels of psychological stress, and muscular overload, lead to the development of one or more muscle bands on which there may be a latent trigger point [15]. As to the use of saliva as a biomarker, there is evidence obtained from studies of the α-amylase, cortisol, CgA and IgAs, as saliva biomarkers related to stress [16]. Even when electrical resistance is a method used for medical and odontological diagnosis, no evidence has been found to relate said electrical resistance to reported pain. In the meantime, Richter and his colleagues mapped electrical resistance in healthy oral mucosal and concluded that the lowest levels were located towards the underside of the tongue (3.62 ± 1.19 kΩ) at a frequency of 1 kHz [17]. The data is very similar to that obtained during the second measurement of the present study, taken when the subjects reported being free of pain, which were of (3.92 ± 1.22 kΩ) at a frequency of 2.8 kHz (see Table 1). On the other hand, there are many studies that measure electrical conductivity to determine ischemia at a cardiac cellular level, not only for diagnosis but also for a possible future prognostic [18].

As to the therapeutical methods used, we chose functional orthopedic treatment (PSIT and SN20), and followed its fundamental principles, with a therapeutical mandibular posture change to consequently modify the position of the temporomandibular articulations, the head, neck, and the structures that make up the octagon of functional priority as described by Simões [19]. In a study conducted to compare neck disability between patients suffering from myofascial and masticatory pain, and healthy patients, it was found that there is a close relationship between the beforementioned structures, and patients suffering from myofascial and masticatory pain also report neck disability, which, in turn, is related to regional muscular sensibility [20]. There are many types of treatment used to relieve myofascial pain, such as physical therapy to increase range of motion, pharmacological treatment, and injections of the toxin botulinum A [21].

The present study chose functional orthopedics as therapeutical method because in our experience it is highly efficient for pain relief, correcting the position of the stomatognathic system structures, equilibrating the occlusal plane, and remodeling the temporomandibular joints.

Functional orthopedic treatment was determined to be more efficient for pain relief on patients suffering from myofascial syndrome. This can be corroborated with the electrical conductivity measurements from the saliva samples, which was lower. Saliva’s electrical conductivity can be a biological marker that helps diagnosis and treatment; none the less, more studies are required to further explain this phenomenon.