Prevalence of orofacial pain and temporomandibular disorder among violin and viola players: a pilot study

Copyright © 2022 Carlos Aleixo Dos Reis, et al. This is an open access article distributed under the Creative Commons Attribution License, which permits unrestricted use, distribution, and reproduction in any medium, provided the original work is properly cited.

Prevalence of orofacial pain and temporomandibular disorder was evaluated among violin and viola players, having as control group other string players (cello and double base players). We found a high prevalence and more severity on violin /viola players. We also found that it is not related to the number of hours performing the instruments. Violin and viola players are more prone to headache and more aware of their parafunctional behavior.

“Music by its nature, consists of moving tones, in many cases moving extremely rapidly and for prolonged periods. The repetitive physical motions and forces required to play such music may at times exceed the body’s capabilities and thus become the source of physical problems”. W. J. Dawson, 1997.

Muskuloskeletal injury (MSI) is any injury or disorder of the muscles, bones, joints, tendons, ligaments, nerves, blood vessel or related soft tissues. This includes a strain, sprain, or inflammation that is caused or aggravated by activity. Musicians are prone to MSI due to practice, rehearsal or performance. Playing a musical instrument may be second only to computer use in terms of population exposure to an MSI risk factor. Some studies have shown that approximately half of professional musicians or music students experience significant MSI symptoms [1, 2]. Although musicians have been affected by MSI for over 100 years [3]), worldwide interest in this problem has only occurred during the last 3 decades. Dentists are treating an increasing number of musicians of all age and abilities, some of whom experiencing orofacial problems as a result of their chosen career or pastime. The treatment of orofacial pain may in turn have relevant consequences for vocalists, players of wind instruments and string instruments (mainly violin and viola) [4]. The playing positions of the violin and viola are similar and can vary during performance. The violin is smaller than viola. Both instruments are held parallel to the floor, between the left shoulder and the jaw, but with the position and pressure of the jaw and left shoulder constantly changing. In some players the teeth are often clenched and in right crossbite. The pressure exerted in supporting the viola during playing has been reported to fracture molar cusps in some individuals [5]. Violinists and violists report neck pain more frequently than the population norm and pain in the masseter and temporalis muscles [6]. It was demonstrated that violin / viola players had four times the incidence of neck pain compared to those who had piano as the main instrument [7]. If the playing position is not correct, they are also prone to temporomandibular disorders (TMD) particularly in the right temporomandibular joint due to the traction and pressure on the mandible for holding the instrument and the clenching of the masticatory muscles [8]. Temporomandibular joints (TMJ) attach the lower jaw to the skull and allow functions such as opening, closing, chewing, speaking, swallowing, etc. Temporomandibular disorders (TMD) refer to a complex and poorly understood set of conditions, manifested by pain and/or associated symptoms such as muscle tenderness or movement limitation (http://www.tmj.org). So, the aim of the present study was to evaluate the prevalence of TMD and other orofacial problems in violin and viola players compared to other string players.

The volunteers who participated in this study are string players from the Musicoop/Sesiminas Chamber Orchestra, Symphonic Orchestra of Policia Militar de Minas Gerais and students from the Music School of the Federal University of Minas Gerais. The analyzed group consisted of 45 subjects, 34 males and 11 females, with age ranging from 18 to 47 (32,25 ± 14,75) years. All the volunteers were informed on the objectives of the study. They were asked to answer a confidential questionnaire without any personal identification.

The questionnaire was prepared by the authors, taking in account reviews of literature, Fonseca anamnestic diagnosis, research diagnostic criteria RDC (validated instrument of diagnosis), and direct observation of string players during their performance of the instrument. It was used to evaluate the presence of signals and/or symptoms of orofacial pain and/or temporomandibular disorders (O-TMD). The questionnaire consisted of direct questions and most of the answers had only one possible choice: NO, YES, SOMETIMES.

The results were analyzed using the frequency distribution of the data obtained from the questionnaire answers and according to the anamnesis index proposed by Fonseca [9]. So, the volunteers were divided into groups classified as light O-TMD, moderate O-TMD, severe O-TMD and O-TMD free. 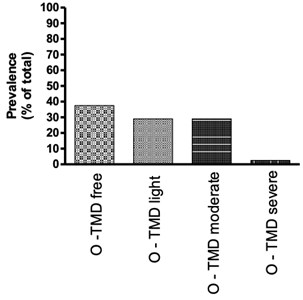 The results obtained from the questionnaire (Fonseca and RDC) showed that viola and violin players exhibited 25 % more orofacial and temporomandibular disorders (O-TMD) than other string players. Other important finding was the strong demonstration that the prevalence of moderate and severe symptoms was higher among viola and violin players. In our sample, no one subject from other string player group, showed severe O-TMD, according to Fonseca’s anamnesis index.

Considering that previous studies had suggested that there was a correlation between the time spent on performing and the prevalence of symptoms [10], we decided to analyze if this correlation was present in our investigation. Surprisingly the correlation was not demonstrated. The number of hours spent playing the instrument was not related with the prevalence or severity of O-TMD problems neither in viola/violin group nor in other string players group. We found subjects that play few hours a month and have moderate symptoms and subjects that play more than 200 hours a month and are O-TMD free.

Since it is well known that stress is directly associated with the onset of O-TMD [11], we realize that it would be very important to verify if the musicians that related some kind of O-TMD discomfort, also considered themselves as people under stressed life. We found that among violin and viola players there was a direct correlation between pain severity and stressed routine. All O-TMD free subjects in this group state that their life was not under stress condition, and the results showed increasing in pain related to stress up to O-TMD severe subject that related a high level of stress. In the group of other string players, we did not observe the same correlation. The majority of the subjects that consider themselves as stressed presented just light O-TMD symptoms.

So, taking in account that we demonstrated that violin and viola players have higher predisposition to O-TMD and that predisposition and pain severity are directly related to stress, we decided to focus our attention on the prevalence of correlated symptoms of O-TMD in this group. We first, investigated if the prevalence of headache in violin viola players was significant, considering that headache is one of the most common complains of O-TMD subjects. Interestingly, we found that headache severity pattern (Fig. 4) is quite similar to stress intensity pattern (Fig. 3) strongly suggesting a correlation among stress, O-TMD and headache.

Fig. 3. Stress versus pain severity. Percentage of violin and viola players that related being under strong stress (correlation with the pain severity) Fig. 5. Consciousness about parafunction. Viola and violin players that are conscious about their parafunction (clenching or grinding) 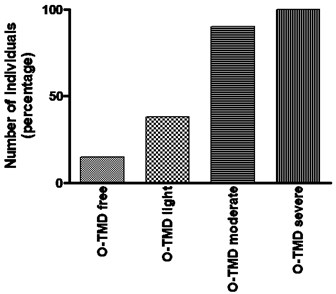 Since the aim of our study was to evaluate the prevalence of orofacial pain and temporomandibular disorders O-TMD in violin and viola players, we considered that the questionnaire used provided a substantial amount of information and was sensitive for the degree of TMD in the studied population. The Fonseca´s index showed itself as a simple and suitable tool to evaluate the individual answers. Since the prevalence of O-TMD in general population ranges from 25 % to 90 % [13], depending on the protocol used for this evaluation, we did not focus our study on the comparison with general population, but inside the string players population, evaluation of a possible different prevalence in violin and viola players. In this study the number of volunteers with some O-TMD severity degree was higher than O-TMD free subjects in violin/ viola group. In other string players (cello and double base players) the O- TMD free group was higher. This finding is in accord to other studies that emphasizes a possible predisposition of violin/viola musicians to O-TMD [14-17]. Interestingly, we also just found severe O-TMD in violin/viola group, corroborating this supposition. So, according to the results of this study, there is a greater probability of finding some degree of O-TMD severity in violin/viola players than in other string players. In this study, no differences were found between sexes regarding positive answers to all questions (data not shown). These results are consistent with previous studies [13-15]. Fonseca [9] advocated those subjects classified as severe and moderate O-TMD must be referred to a specialized health care center or specialist. Thus, according to our results, around 35 % of the violin/viola players must be referred to treat their O-TMD signs and symptoms. Since we did not find a correlation between playing hours and onset of symptoms, further investigations may be done to find the main cause of the problem. Taking in account that 100 % of violin/viola O-TMD severe players and 85 % violin/viola O-TMD moderate players related being under strong stress, we considered this condition as having a high impact on the onset of symptoms. Stephenson & Quarrier [18], in 2005 had driven the attention of the musician community to the high level of anxiety and stress in the carrier. However, our findings showed that this is a great predisposition factor but not the main etiologic factor, since the other string players related high level of stress in the O-TMD light group. It was clear that other factors may be contributing to the highest prevalence on violin/viola players group. Centric or excentric bruxism (clenching or grinding) is a parafunction considered the main etiologic factor to TMD generation [19]. When we investigated if violin/viola players were aware of their parafunction, we found that the more severe was the O-TMD symptoms, more conscious they were about their parafunction, indicating a great correlation between bruxism and O-TMD severity in this group (Fig. 5). The same correlation was not found in control group (data not shown). Another common symptom associated to O-TMD is headache. The overall prevalence of headache in the past years was 21.2 %. Headache occurred more in subjects with, rather than without, symptoms of TMD (27.4 vs 15.2 %) [20]. We investigated the prevalence of headache in violin/viola players and found that musicians in the groups of moderate O-TMD and severe O-TMD had headache prevalence extremely higher than general population with O-TMD (Fig. 4). So, our work indicated that the high predisposition to O-TMD in violin/viola players are related to stress but the high impact on the etiology is the parafunction. We can speculate that the jaw position and teeth occlusion during the performance may be a factor of magnification of the bruxism. Further investigations including clinical examinations are necessary to verify this hypothesis.

It seems that violin/viola players have a higher predisposition to orofacial pain and temporomandibular disorders when compared to cello and double bass players. They also have an extremely higher predisposition to headache compared to general population. Musicians are not used to concentrate in these subjects, since the demand of hours practicing and playing, take most of their time. The results of this research can serve as a guide for future investigations using a big number of individuals. Our findings indicated that these musicians may be also, oriented and referred to health centers in order to prevent damages on their life quality.