With the continuous improvement of production automation, the study of industrial robots is also constantly deepening. Zhu Hongbing [1] and others using ADAMS on a six-degree-of-freedom industrial robot simulation analysis, to obtain its displacement and velocity curve, verify the rationality of the movement model created; Zhang Baocheng [2] and others using numerical analysis software Matlab Stanford robot is used to simulate the object. Based on the kinematics of the robot, the joint displacement, velocity and acceleration curve are analyzed, and the rationality of the kinematic model is verified. ADAMS is a simulation software based on multi-body dynamics [3, 4], the use of ADAMS not only can intuitively see the movement process, but also get the corresponding displacement, velocity and acceleration curve, so the robot kinematics, kinetics analysis.

In this paper, the D-H method is used to establish a connecting rod coordinate system of six-degree-of-freedom moving robot, and its motion model is constructed. Combined with Solid works and ADAMS to simulate the moving robot, and verify the correctness of the kinematic model. At the same time, the trajectory planning of the moving robot is carried out in consideration of the actual operation of the robot. Which provides the data basis for the debugging of the six-DOF handling robot entity in practical use, and protects the handling robot to a certain extent.

Fig. 1. Schematic diagram of the overall handling of the robot 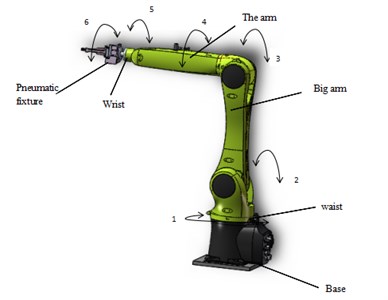 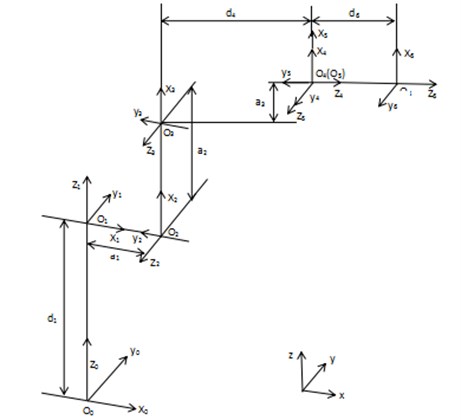 The positive kinematics equation [6] of the moving robot is obtained:

In order to verify whether the transformation matrix is correct, we can assign the position of each position and joint angle shown in Fig. 2 to let , 90° be substituted into Eq. (2). As a result:

and exactly the situation shown in Fig. 2.

3.1. The establishment of the model 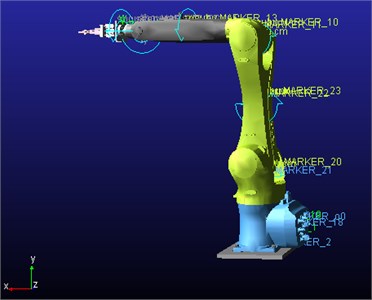 The end position of the pneumatic fixture is taken as the object of study, and the end position point MARKER_o6 is set on it. MARKER_o0 is established on the base as the origin of the coordinate. Set the rotation speed of each joint as shown in Table 3, the simulation time is 1s, measuring the end position relative to the base of the movement.

In the simulation environment, when the handling robot is running, there is no collision and interference between the joints, which conforms to the actual requirements of the movement. After the simulation, enter the post-processing interface.

Fig. 7 shows the change of the angular velocity of each joint with time. Fig. 8 shows the change of the acceleration of each joint with time. In the trajectory planning movement of the handling robot for 7 seconds, the movement of the first few seconds is the repetition of the first 1 second movement, so only the motion angular velocity and the angular acceleration curve of the 1 second before the joint of the moving robot are intercepted. Fig. 7 shows that, as time changes, the joint angular velocity changes smoothly, where the joint 4 speed changes the largest, so the robot operation should pay special attention to the rotation of the joint 4. Figure 8 shows that the angular acceleration of each joint is not abrupt and the change is smooth. Therefore, it is known that the handling robot runs smoothly and meets the actual requirements. 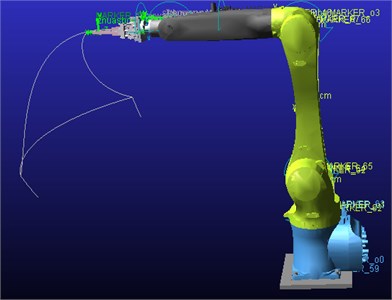 Fig. 7. The speed of the joint rotation of the robot 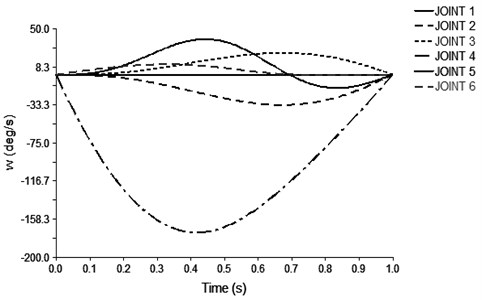 Fig. 8. Handling the robot rotation angle of each joint rotation

In the automated production, the handling of industrial robots has become an indispensable tool, how effective and safe use of handling industrial robots has become a hot spot for continuous research. Using the multi-body dynamics simulation software ADAMS to simulate the movement process of the moving robot, it can not only get the corresponding speed and acceleration curve, so as to provide the basis for finding the problem and solving the problem, but also can see whether the robot has Interference and collision, reducing the physical prototype in the actual debugging damage, while saving time.