Copyright © 2018 Zhenjun Wang, et al. This is an open access article distributed under the Creative Commons Attribution License, which permits unrestricted use, distribution, and reproduction in any medium, provided the original work is properly cited.

By means of curing agent hardening technology applied for lime-fly ash road surface, the performance of unconfined compressive strength, water stability and freezing stability of hardened fly ash mixture has been tested, and the feasibility of the technology has been verified. At the same time, combined with the indoor test results, the test road has been paved which achieved good results, and the construction technology is simple, economical and reasonable, so it has a good value of popularization and application.

With the large-scale construction of rural roads, a number of road pavement structures and forms suitable for rural transportation have emerged. Although asphalt and cement concrete pavements have good road performance, their construction costs are high and the construction process is complicated. While the price of gravel pavement is low, it has poor driving effect on rainy days. For areas lacking crushed stones and gravel materials, it instead increases the cost [1]. Considering the existing traffic conditions of some rural roads in underdeveloped areas, the hardened lime-fly ash road surface can be used as the pavement structure in these areas. Therefore, it is necessary to conduct in-depth research on this type of road surface and examine its actual use effect at the same time.

Hardening the lime-fly ash mixture with a curing agent is a comprehensive method of consolidation soil, which has both physical and chemical reactions. The physical effects are mainly manifested by mixing and compaction; the chemical reaction is mainly represented by the dissociation reaction of lime in water, the pozzolanic reaction between lime, fly ash and soil, as well as the reaction between the curing agent and the mixture [2-4].

The curing agent is mainly a high-water-soluble polymer emulsion, and is the main film-forming substance in the mixture. It has a high chemical stability [5, 6], whose role is to bond the other components together, and adhere to the surface of the coated substrate to form a tough protective film. The reaction of the curing agent to the mixture is illustrated by two processes: one process is that the basic units of the soil are close to each other under the action of the external force and are connected to each other at the interface; secondly, the curing agent hydrates otherwise reacts with the soil to form a gelling property. The hydration products bind the soil particles, so that the soil forms a good whole under the action of the high-molecular polymer, and its strength, water stability, freezing stability, bending strength, etc. have all been improved to different degrees [7-9], thus becoming a new type of pavement material that can be used in rural low-traffic roads.

The soil used in this project is from Guangyang Township, Yintai District, Tongchuan City, Shaanxi Province, China. The area is located in the gully area of the southern Loess Plateau and the soil belongs to powdery sub-clay. The physical property indicators obtained through the test are shown in Table 1.

The active material of slaked lime used in this project is 63.4 %. According to the technical standard of “Technical Specification for Construction of Highway pavement Base”, the lime quality reaches grade Ⅱ ash, which conforms to the requirement of road use.

Through the comparison and selection of 11 curing products, it was finally determined that the three best curing agents were used in this study, which were recorded as 1#, 2#, and 3#, respectively.

The suitable mix ratio of base lime-fly ash mixture was determined by the comparison test in the early stage, and then the hardened lime-fly ash pavement specimens with curing agent were tested by road performance test, and the performance of the hardened lime-fly ash pavement was compared with the benchmark test piece. Finally, the optimal combination is determined. Road performance tests mainly include: compressive strength, compressive resilience modulus, water stability and freezing stability.

The compressive strength reflects the ability to withstand damage under external forces and is one of the most important mechanical indicators of hardened lime-ash pavement. Through the comparison of the compressive strength of three different kinds of mixtures of hardening agents and lime fly-ash, together with common lime fly-ash soil materials.

At the same time, it can be concluded from the figure that the hardening strength of the lime fly-ash soil with a curing agent is higher than that of the common lime-soil, and the increasing range of the 7d compressive strength is greater than the 28d compressive strength. This is mainly because active substances (SiO2, Al2O3) in lime and fly ash have volcanic ash reaction in a relatively slow speed, and the self strength of 7d lime fly-ash soil is relatively low. At this time, the proportion of the curing agent contribution to the overall strength is relatively large, thus making the mixture increase the strength at the early stage. It improves the defect of relatively slow strength formation for lime fly-ash stabilized materials and also lays a good foundation for the later-intensity formation of lime fly-ash soil. 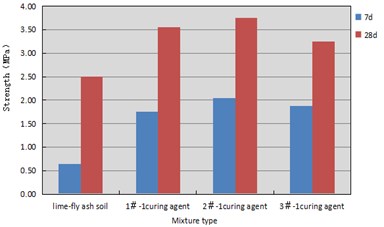 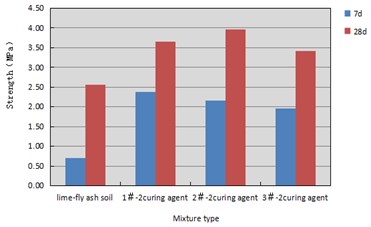 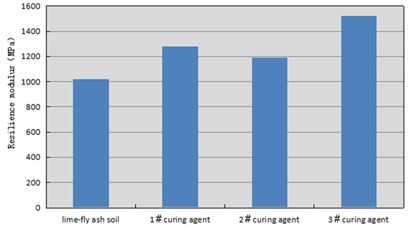 Water stability is an important aspect of material stability. Because the hardened lime fly-ash pavement needs to be used on the surface of the road, the water stability of this material becomes even more important.

From the above figures, it can be seen that after the addition of the curing agent, the water stability coefficients of the lime fly-ash stabilized materials have improved to varying degrees. Among them, the 7d and 28d water stability coefficients have increased by an average of 65 % and 56 %, respectively. It shows that the addition of the curing agent makes the coupling between the particles of lime fly-ash soil more compact, and effectively prevents the water from infiltrating the soil particle groups, thereby enhancing the strength and stability of the hardened lime fly-ash soil. 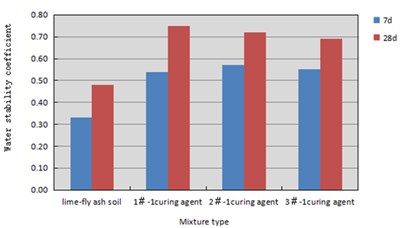 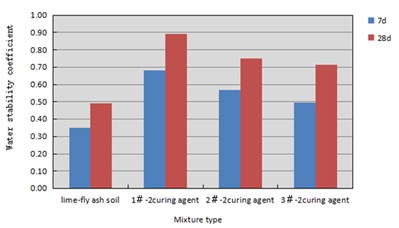 Generally speaking, the freezing resistance of the material is related to the porosity of the material, the bonding strength between particles, the concentration of ions in liquid phase, and so on. Among them, the bonding strength between particles plays a major role in frost resistance. If the connection between particles is high and dense, it can effectively reduce the water immersion and resist the internal stress caused by frost heaving, and the material is not easy to destroy. The higher the frost resistance, the higher the freezing stability coefficient. It can be seen from Fig. 6 that the freezing stability coefficient of lime fly-ash mixture added with curing agent has been improved to a certain extent, in which the coefficient of freezing stability of mixture can be increased by 28 days and 90 days, by 26 % and 24 % respectively. It can be seen that 2# curing agent is better than the other two curing agents in improving the antifreeze property of lime fly-ash soil. 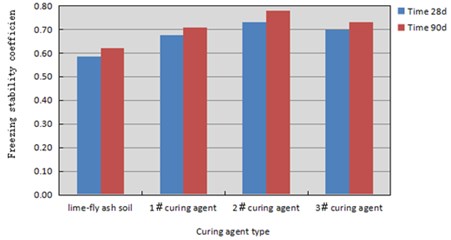 Raw materials include lime, fly ash, soil, stone debris and curing agent. The road mixing construction method is adopted [10, 11]. The lime should be fully digested 7 days before use, and the ash mass and quicklime block should be removed. In order to prevent pollution caused by fly ash hoisting, the surface of fly ash heap should be kept moist, the water content of fly ash should be kept at 15 % and 20 %; the engineering soil of the test road should be removed from large stones, branches, grass roots and other sundries before mixing. In order to ensure that the pavement has a certain wear resistance, after the mixture is compacted, a small amount of stone chips with particle size of 10-20 mm were added. As for construction machines and tools, it is advised to consider the use of rural local equipment, using agricultural vehicles, rotary tiller and vibratory roller, etc.

Three observations (one month, three months and six months) were conducted after the paving of the test road was completed. The overall effect and the specific conditions of the test road were investigated and observed, and the results were compared with ordinary roads of lime- fly ash soil. The results show as follows:

1) Through mechanism analysis, the hardening effect of curing agent and the hydration reaction of fly ash and lime itself are the mechanism of the formation of the intensity of lime- fly ash road surface.

2) It is proved through indoor material tests that after adding the curing agent, the performance of the hardened lime-fly ash pavement material is significantly higher than that of ordinary lime-fly ash soil. It can basically meet the requirements for the use of low-traffic highway pavement in rural areas. This material can also be used in general highway bases with similar raw material areas.

3) Through the paving of the test road, it can be seen that the construction process of hardened lime-fly ash soil road surface is simple and reliable. It is very suitable for popularization in rural areas with similar raw materials and construction conditions.