Copyright © 2018 V. A. Afanasyev, et al. This is an open access article distributed under the Creative Commons Attribution License, which permits unrestricted use, distribution, and reproduction in any medium, provided the original work is properly cited.

In the article, the flight trajectory of a material point in the atmosphere is considered. For its calculation the Runge-Kutta method and the system of the equations of external ballistics are used. Moreover, the approximation of the resistance function according to the 1943-year law for subsonic and supersonic speeds is made. The expansion of dependences of the excess above the line of aiming and flight time from the distance in Taylor’s series is implemented. The results of researches are used in solving the direct problem of external ballistics for the definition of trajectory parameters with an increased accuracy. 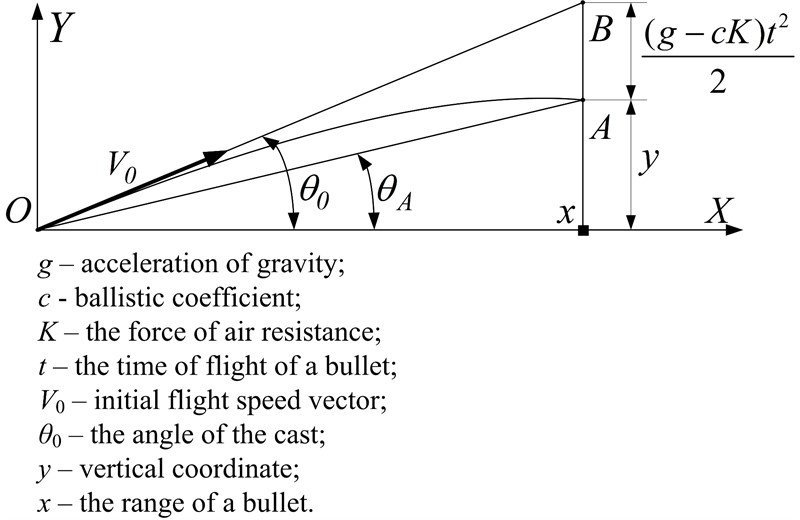 In light targets and opto-electronic blocks for speed measurement and bullet deceleration (a form coefficient) an indirect measurement method is used. Initial measurable physical characteristics are time moments of the bullet flight through light screens (block planes). A measurement accuracy of time moments and accuracy of their binding to trajectory coordinates in the points of its meeting with the planes determine the accuracy of the computation of trajectory parameters. A measurement accuracy of time moments depends on the ratio of signal/noise, the steepness of the rising edge of the signal and the way of time moment registration (according to signal maximum, the middle of the time interval of the excess signal, the excess moment of the border level on the front and back signal line). Because of the inertness of opto-electronic transformers a back signal line is tightened more than a front one and the signal has unlimited duration theoretically. Therefore, it is worthwhile to use the fixation of time moment according to the excess method of border level signal by taking, obviously, an optimal time measurement, whose filter has maximum ratio of signal/noise [1].

The binding accuracy of time moments to trajectory coordinates partly connects with the measurement accuracy since block planes have finite thickness and it is difficult or practically impossible to set how deep a bullet is in this plane when a time meter has worked out. If the planes are identical, all the planes have the same spatial and, correspondingly, time shift and time intervals between the planes stay invariable. In other words, during the speed change or deceleration base offset happens but the base line stays unchangeable.

It is quite another matter when we talk about the spatial position of the planes because it is rather problematic to set a value exactly enough, so it is worthwhile to identify the time models and the meeting points of the trajectory and the plane.

Next, we will take the trajectory of the close target as a line and set it in a parametric form (Fig. 2):

where , , – the guide cosines of the trajectory, – the parameter, representing the distance along the trajectory between points and ,  0.

where – the transportation index, – the row vector of suitable coordinates.

Now we will mark through , , the rotation matrixes about the axes , , respectively on the angles , , . In the right coordinate system at the turn anticlockwise we have:

The angles of the cast and the course are situated on the coordinates of two points of the line (Fig. 4) in the following way:

The guide cosines of the line with the angles of the cast and the course, corresponding Eq. (6), are equal:

In the close target on the blocked area of the length 4-6 m along the axis a trajectory turns into a line, a tangent trajectory in the point of impact in the target (the registration plane on Fig. 5).

Fig. 1. Setting of the equation of the light plane 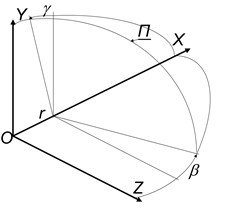 Fig. 2. Setting of the line in a parametric form 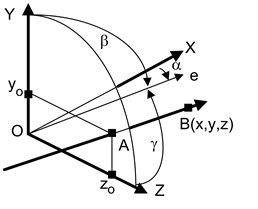 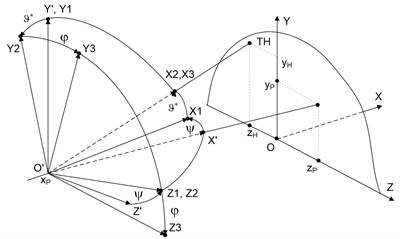 Fig. 4. Scheme for the definition of the guide cosines 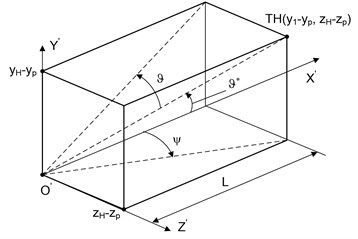 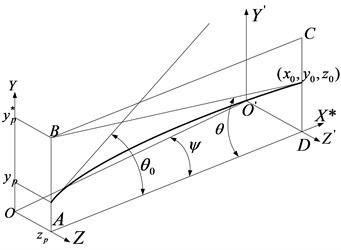 The point of intersection of this line and the position plane creates a conventional (fictitious) flight point with the coordinates , .

The coordinate system by the argument :

The coordinate system by the argument :

In Eqs. (8-13) – velocity vector projection on the axis ; – angle of inclination of tangent to trajectory; , , , – table functions of air consistency, – ballistic coefficient of the bullet.

In the case of the flat trajectory, which the bullet trajectory is during the firing from the small arms by direct fire, we will take the decomposition of the functions and in Taylor’s series in the area of a starting point (a flight point):

where – partial derivative with respect to .

Thus, a quartic polynomial, corresponding to the series Eq. (15), looks like:

In the case of the series Eq. (16) we find consistently:

According to the Taylor’s range theory it will accurately represent the functions in the point, if the last one from accounted derivatives is calculated in some mid-point. If we take an arithmetical mean (for this segment) argument value, for example, then the accuracy with a limited number of terms of series increases and corresponds to the accuracy of the series with an additional term [4]. Without calculating the coefficient of an additional term, we will use the following technique. Since time and the coordinate at a given range can be determined by the numerical integration of the equations of external ballistics, for example, by the Runge-Kutta method, then we will add an additional term of the series, after that we will find its coefficient from the condition of given time or coordinate at a given range.

If starting conditions , and ballistic coefficient are unknown, we are able to try to approximate excess and time by polynomials in the presence of changes in some points of the trajectory. In this case, the coefficients of the polynomials will be devoid of physical meaning.

The models of the trajectory of a straight shot for the excess above the line of aiming and flight time with elaboration by additional terms of Taylor’s series have been developed, their coefficients are found from the condition of the passage of solution through a final point (at a given range) of the trajectory. The approximation of the trajectory for excess and time using polynomials can be accurate enough. At the same time, we can approximate not the whole trajectory but only the interesting segment for us, for example, in the area of placing of block planes and a light target.

The results of researches are used in solving the direct problem of external ballistics for the definition of trajectory parameters with an increased accuracy.