Copyright © 2018 Bang Chen, et al. This is an open access article distributed under the Creative Commons Attribution License, which permits unrestricted use, distribution, and reproduction in any medium, provided the original work is properly cited.

The so-called self-synchronization phenomenon corresponds to the consistency or certain relationship of systems’ parameters caused by their internal couplings and has been widely involved in non-linear vibration, hydraulic [1-3], electromechanical coupling, automatic control theory and other fields [4-8].

The above researches are mostly focused on the synchronization of pendula or rotors installed on the same vibrating frame. In this paper, we propose a vibrating system with two rotors mounted on two different vibrating bodies.

2. Dynamical equations of the vibrating system

As shown in Fig. 1, two rotors are mounted on different vibrating bodies. The vibrating body () ( 1, 2) can move in horizontal direction () and is installed on the foundation by the spring. The two bodies are connected by a coupling spring. Counterclockwise direction is taken as positive. Inertia moment and eccentricity of the rotor on its mass center are given by and . Other variables are show in Fig. 1. In this paper, synchronization of rotors is analyzed in a non-resonant vibrating system, in which rotation frequencies of rotors are larger than nature frequencies of vibrating bodies. The system is denoted as after-resonance system. We assume that , , , where , .

Fig. 1. Simplified model of the system

The electromagnetic torque and resistance moment of the driving motor are and () respectively. When ( 1, 2) fluctuates near the frequency , the influence of electromagnetic leakage can be neglected, and the driving force of induction motor can be linearized as , where , , , and (1, 2) correspond to the pole number, mutual inductance, synchronous speed, stator inductance and rotor resistance of the motor; is the voltage amplitude. As self-synchronization of rotors is achieved, speed fluctuations of rotors are small [1, 2]. Therefore, small variables can be neglected. Introducing , , and , we have:

The synchronous speed of two rotors is denoted by . When self-synchronization of rotors is achieved [1, 3], phases of the two rotors can be denoted as , , where and are slowly-varying parameters. From Eq. (1), we obtain:

, , and show the coupling effects in the system. Rotors are driven by motors, and the resistance is approximately proportional to its speed. The average values of resultant torques of rotors are denoted by , . As the system is stable, we have:

where is the vibration torque (VT). Introducing the variable substitutions:

can be obtained. Thus, the synchronization condition can be expressed as follows [1]:

The stability criterion of the synchronous state can be discussed based on Lyapunov stability theory, it can be deduced as:

Table 1. Parameters of the system

We take into consideration. can be obtained easily. Thus, is the maximum vibration torque of the system (MVT). For the after-resonance system, denominator of may be zero when come to be a specific value . is deduced as:

Fig. 2. Surface of the maximum vibration momentvarying with the coupling frequency and synchronous speed in the after-resonance system 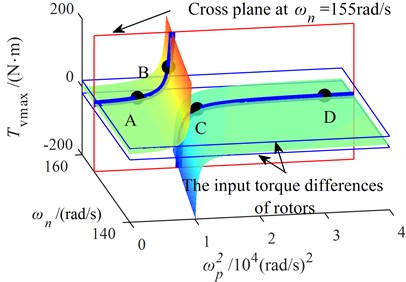 a) The three-dimensional diagram 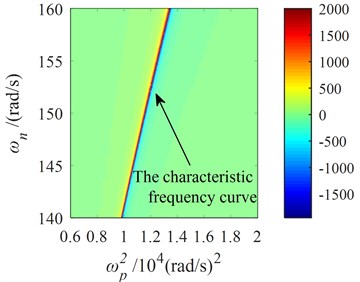 b) The two-dimensional diagram

Fig. 3. Relationship between the maximum vibration moment and coupling frequency 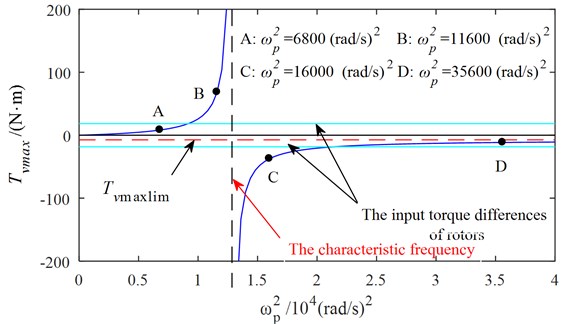 4. Simulations for synchronization of two rotors

Fig. 4. Simulation results of the after-resonance system when the coupling stiffness is 1.36×106 N/m 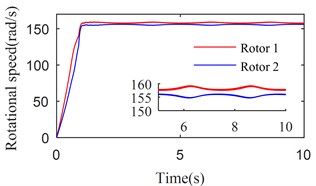 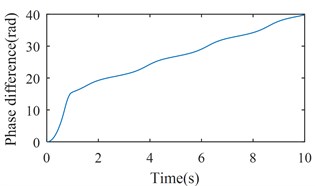 Fig. 5. Simulation results of the after-resonance system when the coupling stiffness is 2.32×106 N/m 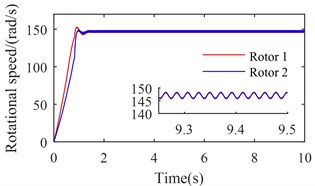 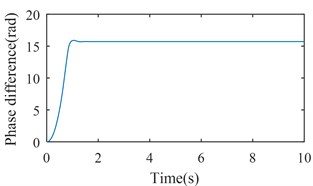 Fig. 6. Simulation results of the after-resonance system when the coupling stiffness is 3.20×106 N/m 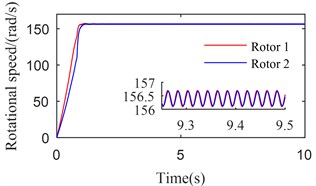 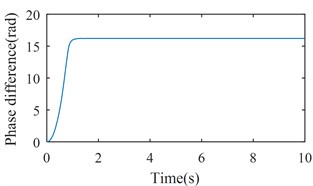 Fig. 7. Simulation results of the after-resonance system when the coupling stiffness is 7.12×106 N/m 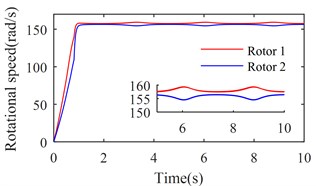 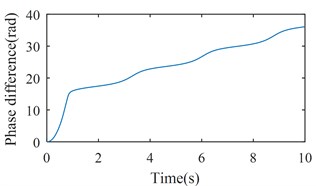 Fig. 8. Simulation results of the after-resonance system when the coupling stiffness is tending to infinity 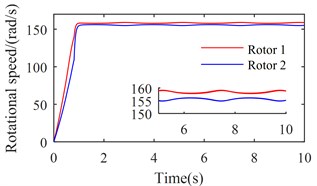 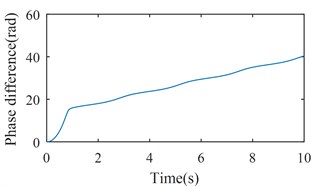 Figs. 7 and 8 show the simulation results when is set to be 35600 (rad/s)2 and tend to infinity respectively. According to Figs. 2 and 3, rotations of two rotors would not be self-synchronizing in these cases. As shown in Figs. 7(a) and 8(a), speeds of the two rotors are not consistent when the system reaches stable conditions; Figs. 7(b) and 8(b) demonstrate the asynchrony of the two rotors. Simulation results confirm the theoretical analysis.

This study is supported by International Science and Technology Cooperation Program of China (Grant No. 2015DFR70660).