Copyright © 2018 Ze-dong Yang, et al. This is an open access article distributed under the Creative Commons Attribution License, which permits unrestricted use, distribution, and reproduction in any medium, provided the original work is properly cited.

With the development of science and technology, traditional design methods can no longer meet the needs of modern design and production development. Parametric and optimal design has become one of the most popular application technologies in CAD. Parametric and optimal design was studied based on VB.net language for secondary development of AutoCAD and MATLAB language for secondary development of ANSYS Apdl for disc of aero-engine. The structural parameterization technology was used to realize the rapid forming, and genetic algorithm retains elite was used to optimal design. The optimal design was carried out by using the developed software in this paper, and the optimal results shown that the disc weight was reduced by 34.48 %, the reduction effect of weight was obvious.

With the development of science and technology, traditional design methods have been unable to meet the needs of modern design and production development. Parametric design and structural optimization design techniques have been emerged and developed. The disc of aero-engine was composed of the rim, the spoke and the hub, these were all axisymmetric structures typically, and they could be designed rapidly with parametric design and structural optimization design technology [1-3].

Many researchers have done excellent work in this area. Yuwang Song and others from Beihang University conducted research on parametric design techniques for turbine blades, the three-dimensional solid model of the blade could be quickly established using the well-written modules. Jichun Zhang and others from Beihang University applied the characteristic-based parametric technology to the rapid design of the V-type engine [4]; Kaiyuan Zheng and others at Nanjing University of Aeronautics and Astronautics conducted parameterization design technique for compressors, turbines and combustion chamber of a certain type of engine, and they have developed their work into software at the end [5]; Yongxian Luan from Nanjing University of Aeronautics and Astronautics combined the parameter design and finite element calculation technology for boltless baffles and developed it into software [6]; Yingchun Bai and Jiping Zhong used the shell and body unit to establish the finite element model of the boom. The optimal distribution path of the material was obtained through the topology optimization of the parts, and the optimal model of the boom was established [7]. The parameterization and genetic algorithm optimization technology were combined in this study, and the parametric rapid prototyping technology was applied to the structural optimization program, which greatly improved the design efficiency of the disc of aero-engine.

2.1. The process of structural parameterization

The graphic files of AutoCAD could be read through the Active X control in VB.net. Typical axisymmetric parts of aero-engines is researched by developing AutoCAD twice with the help of VB’s powerful functions in the paper. Firstly, the basic structure contour could be completed using a two-dimensional graphic designed by AutoCAD; then, detailed design of 3D solid cutting and merging would be performed by boolean operations; lastly, the structural weight could be obtained based on material property parameters. The process of the structural parameterization of disc was shown as Fig. 1.

Fig. 1. The process of the structural parameterization of disc 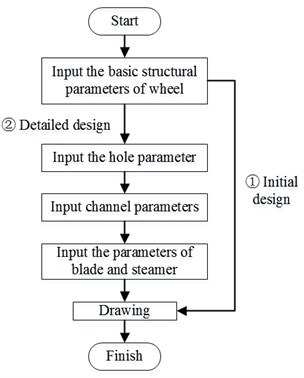 Fig. 2. The diagram of the parameter used in design 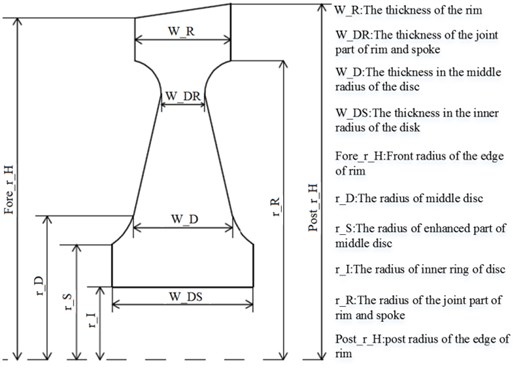 2.2. The parameters used in structural parameterization of disc

The structural parameters of disc were shown in Fig. 2. Table 1 showed all parameters used in parametric design.

Table 1. The details of parameters used in design

2.3. The quick design of engine disc 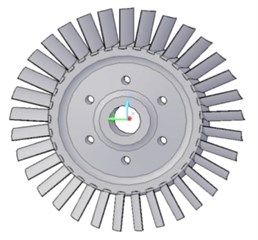 3.1. The process of optimization

Fig. 4. The process of structural optimization

3.2. The analysis model used in optimization

The weight and strength of the disc were considered at the same time in optimal design, which means it belongs to a multi-objectives optimization problem.

The optimized mathematical model expression was expressed as:

where the denoted the strength and represent the weight of the disc; is objective function; is inequality constraints including stress and strain constraints; express the minimum while the denoted the maximum of the th variable; and are the weighting coefficients of the two target ( and ).

Before weighting, each target needs to be regularized to eliminate the difference in the order of magnitude. It is usually taken as , and , .

It is found that the unreasonable regularization method would strengthen or weaken a certain target inadvertently in practice, which leads to the weighting coefficient cannot accurately reflect the importance of the target, and finally the optimal result will be deviated from expectations. A better regularization method should convert both the weight and strength target values into dimensionless values in the range of 0-1 using the Eq. (3):

3.3. The range of variables used in design

Among them, ‘2 mm’ is the lower limit of the thickness in this research, which can be modified according to the actual engineering conditions.

The following were optimal constraints:

where represented the maximum stress calculated for the disc; is the allowable stress of the disc.

3.5. The results of optimization

The generations of optimization was set as 150, The initial values of the parameters of the disc model was listed in Table 2. The range of the design variables was determined according to the initial values and geometric constraints of the model. Material parameters and applied load parameters were required during optimization. Material parameters included material density, elastic modulus, Poisson's ratio, maximum allowed stress, and load parameters included the distance between blade’s centroid and the center of disc, the speed of disc and the generations of optimization. The mass of blades was converted into a centrifugal force and loaded on the rim when the strength calculation was ran, and the axial and circumferential displacement constraints were added to the rim of the front surface of the disc center. The material parameters and applied loads were shown in Table 3 and Table 4.

Table 2. Initial value of the parameter

Table 5. The results of structural optimization

The optimal results were shown in Table 5 and Fig. 5. It could be seen that the target value was converged around 50 generations from the target curve of optimization, and the weight of the disc was reduced from 8.7 kg to 5.75 kg while the strength met the allowable conditions. The weight of disc reduction was nearly 3 kg accounting for 34.48 % of the original weight.

Fig. 5. The target curve of optimization 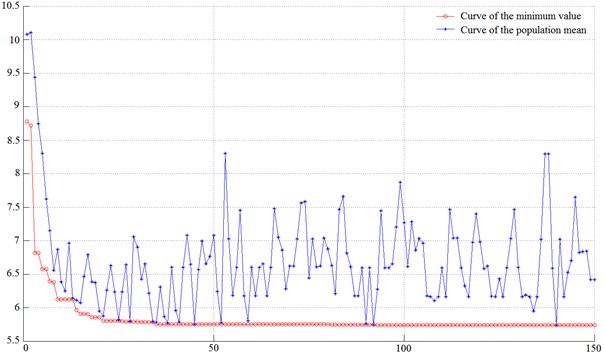 The parametric design method and structural optimization technology of aero-engine component structure were studied in this paper. Following were the conclusions:

2) The program of structural optimization was designed based on the MATLAB language to call the ANSYS Apdl statement.

3) The weight of the disc was reduced by 34.48 % after optimizing while the strength met the allowable conditions. It can be seen that the weight reduction effect was very considerable.