Sensitivity analysis of leaf blower vibration isolator based on ISIGHT

Copyright © 2018 Wenbin Yu, et al. This is an open access article distributed under the Creative Commons Attribution License, which permits unrestricted use, distribution, and reproduction in any medium, provided the original work is properly cited. 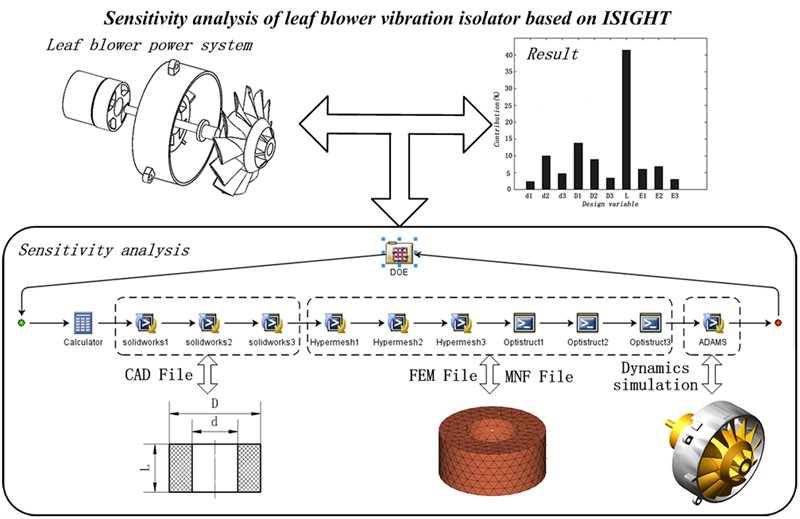 2. Integrated system framework based on ISIGHT

ISIGHT is a software that drives product optimization design through software collaboration. Its function can be summarized as an automation integrated design optimization process. The key point to automating the optimization process is to implement reconstruction CAD model by parametric drive and simulate through batch mode. This paper combines the technical requirements of sensitivity analysis with rubber vibration isolator and builds an integrated framework based on ISIGHT. As shown in Fig. 1, batch files were created based on the parametric modeling features of each design software. Using the commercial software ISIGHT to call these batch files to realize the integration and collaboration of Solidworks, Hypermesh, Optistruct and ADAMS. Firstly, the dynamic model of the leaf blower power system was established based on ADAMS. Then, the vibration isolator geometry model was created for Hypermesh by Solidworks, a finite element model was created for Optistruct by Hypermesh. Furthermore, the isolator flexible body file was exported to the ADAMS by Optistruct. Finally, the dynamics solution was performed in the ADAMS. 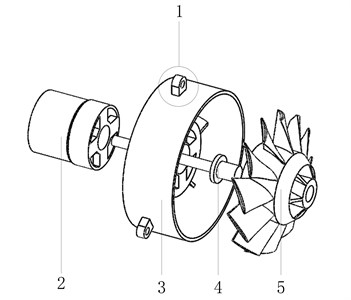 The original blower power system is fixed to the casing by bolts and the vibration is not effectively isolated. Because the rubber isolator can be designed into various shapes and different hardness, it is widely used in mechanical products. The basic shape of the isolator used in this paper is shown in Fig. 3. The rubber isolator structure is modeled by the Solidworks parametric modeling method. The characteristic sizes of the control shape are inner diameter , outer diameter and length . 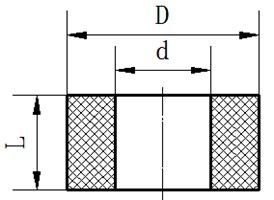 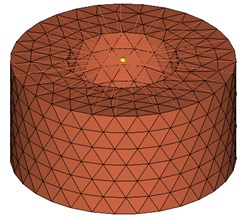 The rubber material has a nonlinear characteristic in the case of large deformation but can be considered to be linear in the case of small deformation. Because there is little pressure on the rubber isolator of the blade power system, it can be assumed that the stiffness of the isolator is linear. In this paper, the Command file is used to record the steps in Hypermesh, the steps including importing 3D geometry files, meshing, creating rubber isolator materials and assigning properties, creating attachment points and creating load steps. The complex process of manual modeling can be introduced into parametric modeling by transforming the code in the Command file. In this paper, Optistruct is used to solve the first ten order CB modes of rubber isolators. The parametric modeling method in Optistruct is the same as the method in Hypermesh.

Step 3: Terminate the recording of macro commands in ADAMS, open the macro command file, and extract the various command segments for executing the task.

Table 2. The range of design variable

Here is the amplitude of the centroid of the power system.

In order to analyze the influence of the structural design variables of the rubber isolator on the transmission force, the DOE was carried out in this section. In this paper, the Latin hypercube method was used to sampling based on the ISIGHT integration program built in the last section (Fig. 4).

Fig. 5. The contribution of the vibration isolator parameters to the optimization 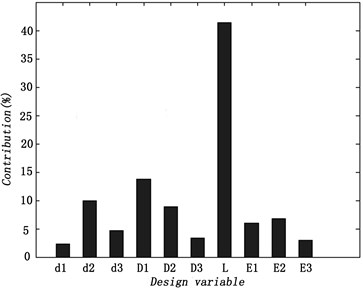