Optimization of critical speed of double spools with reverse rotation

Copyright © 2018 Ze-gao Shi, et al. This is an open access article distributed under the Creative Commons Attribution License, which permits unrestricted use, distribution, and reproduction in any medium, provided the original work is properly cited.

Under the requirement of high speed, high pressure ratio and high thrust weight ratio, more and more aircraft engines adopt counter rotating technology. In this model, the F135 engine is used to research the dynamic characteristics of a dual rotor system with four supports supported by an intermediary. In this paper, the critical speed of the system is solved by the direct method. Compared with the Campell diagram, the eigenvalue problem of the required solution is greatly reduced. The critical speed is optimized by using genetic algorithm. Moreover, when the constraint of frequency forbidden zone is more severe, the elitist preserving genetic algorithm is used, which greatly reduces the required convergence algebra.

The development of modern aircraft has put forward requirements of high speed, high pressure ratio and high thrust-to-weight ratio for aero-engines. In order to further improve the performance of aero-engines, especially the performance of military aero-engines, more and more engines use counter-rotation technology. Such as the US F119 engine, YF120 engine, the British “Pegasus” engine, RB211, GE120 and so on. The use of the counter-rotation technology helps to reduce the impact of the rotor system gyroscopic moment on the maneuvering performance of the aircraft, and thus improve the maneuverability of the aircraft [1].

In this paper, the model refers to the F135 engine and studies the dynamic characteristics of the two-rotor system with four fulcrum supports. Although this support structure can effectively reduce the mass of the engine, it will make its dynamic characteristics more complicated. The low-pressure rotor adopts a 0-1-1 support mode, and the rigidity of the entire low-pressure rotor is reduced; The fulcrum support makes the rotor vibration condition no longer a simple superposition, but a vibrational coupling between the inner and outer rotors [2]. Therefore, the analysis and optimization of the critical speed of the dual rotor support system is very necessary, and the purpose of eliminating dangerous hazards can be achieved.

The double rotor tester is designed as a four-point support. The inner and outer rotor speed ratio is 1.6 and is reverse rotation. The inner (low-pressure) rotor is supported by 0-1-1, while the outer (high-pressure) rotor is supported by 1-0-1. The tester is provided with four adjustable support bearings. The structure diagram of double rotor tester is shown in Fig. 1.

Assume that the equation of motion of the rotor system is in the form of Eq. (1):

After obtaining the system mass matrix, stiffness matrix, damping matrix and gyro matrix by the finite element method, the critical speed of the rotor system can be calculated by solving the gyro eigenvalue problem. The speed is plotted on the abscissa and the corresponding natural frequency is plotted on the ordinate to plot the Campell diagram. However, this method needs to solve the eigenvalue problem once at each speed, the calculation takes a long time, and the solution efficiency is low [3]. Therefore, this paper uses the direct method to solve the critical speed of the system.

Eq. (2) is about the eigenvalue problem, and the corresponding critical speed can be obtained by solving it:

For a single-rotor system, let 1 and solve for the critical speed of the system. For the dual-rotor system, since there are two frequencies of excitation force, it is necessary to separately calculate the critical speed of the inner and outer rotors as the main excitation. Let and . Where is the inner rotor speed ratio, is the outer rotor speed ratio. This article takes 1 and –1.6. With this method, only the two eigenvalue problems need to be calculated after the completion of the equation of motion to obtain the critical speed of the dual-rotor system. Compared to the method of drawing a Campell diagram, the calculation time is greatly reduced. Calculation results of direct method and experimental data are shown in Table 2.

This paper uses genetic algorithm to optimize the critical speed. Compared with traditional optimization algorithms, intelligent algorithms such as genetic algorithms have the advantages of lower requirements on mathematical models and strong global search capabilities. It is especially suitable for the problem that the design variables and the objective function have no explicit expression [4, 5].

In this paper, the stiffness of bearing I, II, IV is taken as the design variable, and the deviation of the frequency is as far as possible from the critical speed of each step. The real-time coding genetic algorithm is used to optimize the critical speed characteristics of the rotor system of the tester. Optimization problems can be described in mathematical language as Eq. (3):

Situation 1 is optimized by using genetic algorithm with real number coding. The number of individuals in the population is 30, and the maximum iteration number is 100 generations. The optimization goal is the distance between the first three critical speeds and the frequency exclusion zone. 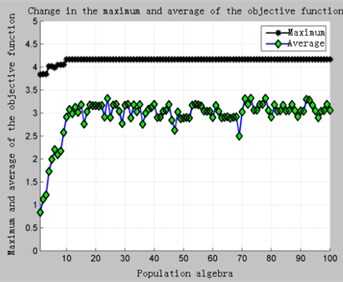 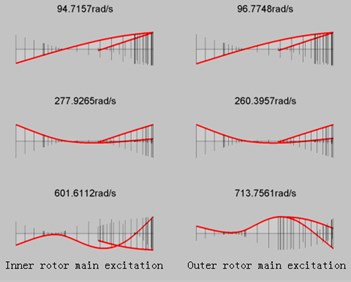 b) Critical speed and corresponding mode of vibration after optimization

The calculation results of Situation 1 are shown in Fig. 2 and Table 5. It can be clearly seen from Fig. 2(a) that because the constraint of the frequency 1 restricted area is loose, there is a feasible solution in the initial population, and the convergence speed is very fast. After only 10 generations the result has converged. The optimized critical speed and support stiffness values are shown in Table 5.

Table 5. Situation1 comparison of results before and after optimization 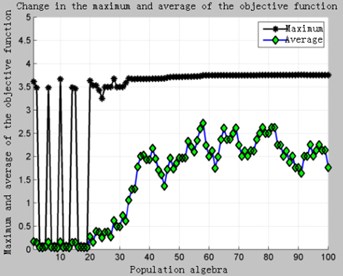 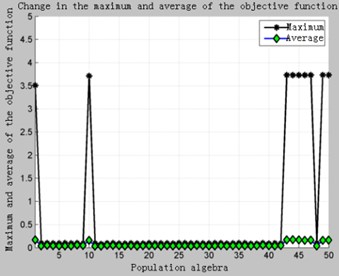 As can be seen in the Fig. 3, due to the stricter constraints, there are fewer feasible solutions in the initial population, and the feasible domain of the design variables is narrow. Even if there are viable individuals in the current population, it is very likely that they will disappear during the process of selection, crossover, mutation, and reorganization. It can be seen in the Fig. 3(b). In view of this situation, First, it can be solved by increasing the iterative algebra, but it will increase the computational time and waste the computing resources. Second, it can adopt the elite retention strategy. That is, copy the optimal individual in the current population, and then select, cross, mutate, and reorganize the entire population to obtain a new population. Calculate the fitness value of the new population and compare the worst individuals in the new population with the previous best individuals. Take the one with the highest fitness value to replace the worst individual in the new population. In this way, on the one hand, it is possible to avoid the disappearance of excellent individuals in the process of inheritance, and on the other hand, the speed of convergence can be greatly improved. The optimization results are shown in Fig. 4. 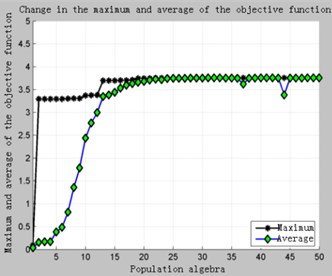 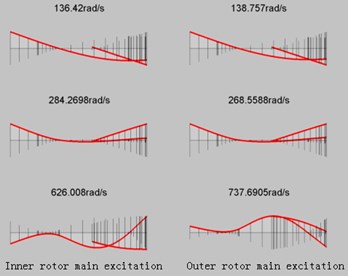 b) Critical speed and corresponding mode of vibration after optimization

Comparing Fig. 3 with Fig. 4, it can be clearly seen that adopting the elite retention strategy can greatly improve the convergence speed under the premise of ensuring optimization.

It only takes about 20 generations to get the optimization results. This is because on the one hand, the elite reservation accelerates the algebra required for the first feasible solution, and the second is that after the first feasible solution appears, the optimal individual in the current population is not lost due to genetic manipulation. It ensures the retention of excellent genes in the population and accelerates the convergence.

Table 6. Situation 2 comparison of results before and after optimization

1) Compared with the Campell graph method, the number of eigenvalue problems to be solved by the direct method is greatly reduced. And through experiments, the relative error is less than 2.5 % in the first three steps.