Copyright © 2018 Sangui Wang, et al. This is an open access article distributed under the Creative Commons Attribution License, which permits unrestricted use, distribution, and reproduction in any medium, provided the original work is properly cited.

With the rapid development of railway construction, many railway projects have crossed the soft soil deposit. In order to obtain ground settlement data after train operation to ensure the safety of railway, the train-track dynamic model and track-ground finite element model were established to predict accumulated deformation of soft soil foundation induced by dynamic train load. Compared to the measured vibration acceleration on the sleeper and ground, the predicted vibration acceleration can match well with the measured vibration acceleration across the full range of time history shown. The results showed that after many times of train operations, the cumulative deformations of the ground at different depth are quite different, it may affect the safety of the railway operation, the foundation reinforcement measures can be considered during construction.

With the rapid development of railway construction, many railway projects have crossed the soft soil deposit. The original survey design specifications and related manuals cannot meet the requirements of the design standards for the evaluation and treatment of the soft soil deposit. The settlement of the ground surface, especially when it occurs in a rapid and differential manner, may cause severe damage on human-built structures and the loss of human lives.

In order to obtain ground settlement data after train operation to ensure the safety of railway, the train-track dynamic model and track-ground finite element model were established to predict accumulated deformation of soft soil foundation induced by dynamic train load. The results can evaluate the safety of the railway operation.

In order to analyze the dynamic deformation mechanism caused by moving train loads, this section establishes the of train-track coupling dynamic model, fully considering the influence of track irregularity, and calculating the wheel-rail interaction when the train runs on the track structure in the time domain. On this basis, the finite element model of track structure and ground is built and excitation by moving train loads, and the dynamic response characteristics of the ground under moving load are obtained, and the long-term accumulated deformation of ground induced by dynamic train loads is predicted.

The axial load of the train passing through the uneven track including static load and dynamic load. The static load is generated by the self-weight of the train, and the dynamic load is formed by the contact of the wheel and rail when the train is running. In order to calculate the dynamic response between the train and the track, a train-track interaction dynamic model is established, which takes into account the interaction between the train vehicle, the rails, the underlying underlay and the fasteners, sleepers, track beds and foundations. It includes the vehicle submodel and the track structure submodel, as shown in Fig. 1. 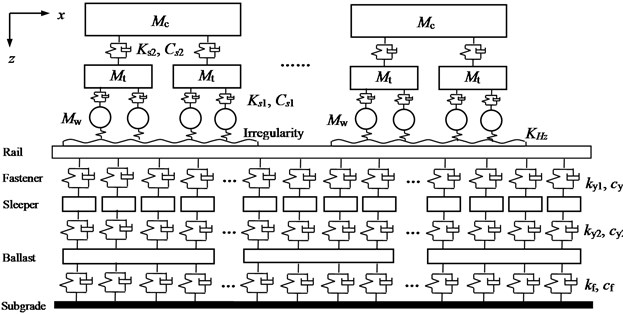 A train consists of eight cars, each of which includes 10 degrees of freedom. The train is simulated to run on the track at a constant speed, and the relative displacement between the trains can be ignored. According to the Lagrange equation of motion, the dynamic equilibrium equation of the train model can be established as Eq. (1):

where , and are mass matrix, stiffness matrix and damping matrix of train, respectively. , and are acceleration, velocity and displacement vector of train. is the wheel and track interaction force [6]. The train dynamic parameters are shown in Table 1.

The entire track structure system simulation is based on the finite element method and is set up as a three-layer structure model including rails, sleepers, ballast and subgrade, as shown in Fig. 1. The degree of freedom of the track system is set on the same plane as the degree of freedom of the vehicle system. In order to reduce the size of the finite element stiffness matrix, the steel rail is assumed to be a discrete finite length Euler beam, ignoring the influence of shear force and moment of inertia, and an adjacent analysis unit is formed by the adjacent two sleepers and ballast supporting the rail, as shown in Fig. 2. The track structure dynamic parameters are shown in Table 2.

Based on the Hamilton principle, the dynamic equation of the orbit model is as follows:

The track-ground model was based on finite element to build. The track structure model consists of rails, sleepers, ballasts. The track adopts 60 kg/m, U75V hot-rolled steel rail, and the distance between two rails is 1.435 m. The relevant physical property parameters are shown in Table 3.

For the ground model, according to the detailed geological investigation, the physical and mechanical parameters of the main soil layers are shown in the table below.

For the train load, this paper simulates moving train loads by applying wheel-rail contact force which obtain from train-track dynamic model to the rail surface. The train speed is 20 km/h. For the boundary condition, by coupling the finite element and the infinite element to simulate infinite ground. It has wide applicability in the problem of simulating the infinite domain without losing the accuracy of calculation. The track-ground model is shown in Fig. 3. 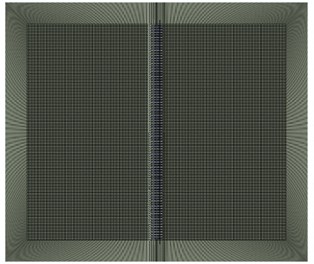 The cumulative deformation of the ground under the moving train dynamic load can be calculated based on the empirical formula which proposed by Chai and Miura [8]. The formula was established by the soil cumulative plastic strain results based on the indoor dynamic triaxial test, which is defined as:

The specific analysis process is: a) dynamic analysis of the three-dimensional track-ground finite element model. The dynamic moving load is the wheel-rail contact force obtained by the train-track dynamic model. b) The dynamic analysis is carried out to obtain the dynamic response of the soil after one single train pass-by. The maximum dynamic deviator stress of the soil can be obtained. c) The static analysis of the model can obtain the initial static deviator stress of the soil. d) Use the empirical formula Eq. (5) to calculate the plastic cumulative strain of the ground under any vehicle load times, and calculate the cumulative deformation of the ground. 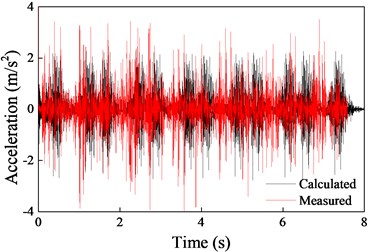 a) On the sleeper

b) 10 m away from the track on the ground 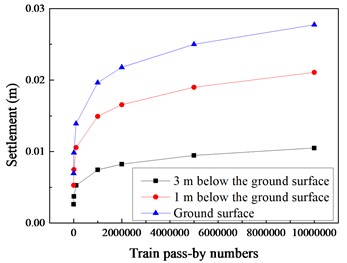 The train-track coupling dynamic model and track-ground finite element model were stablished to predicted accumulated deformation of soft soil ground induced by dynamic train load. The conclusions can be drawn as below:

2) Train operations may affect the safety of the railway operation, the foundation reinforcement measures can be considered during construction.