Copyright © 2018 Biswajit Nayak, et al. This is an open access article distributed under the Creative Commons Attribution License, which permits unrestricted use, distribution, and reproduction in any medium, provided the original work is properly cited.

Magnetorheological (MR) materials are smart materials whose rheological properties such as viscosity and shear modulus response rapidly to the external stimulus i.e. the magnetic field intensities. Magnetorheological elastomers (MREs) typically consist of magnetically polarisable particles in a non-magnetic elastomer such as synthetic or natural rubber. Particles inside the non-magnetic elastomer can be distributed homogeneously or may be combined to form a chain like columnar structures under the application of steady state magnetic field [1-3]. MREs are being used in semi-active or active vibration devices for different applications. Some of the devices are bushing withvariable stiffness suspension, tunable spring elements, adaptive tuned vibration absorber, tunable automotive mounts and structures [4-6].

Various factors such as volume percentage, particle size, elastomer matrices as well as the structural alignment of the particles under a magnetic field influence the rheological properties of the MRE [7-9]. Maximum magnetorheological effect on the elastomers can be obtained when the magnetic particle fill rate is around 30 % of the entire volume [8, 9]. Various matrix materials such as natural rubber and thermoplastic elastomers and also new methods have been used to fabricate new MREs [10, 11]. To enhance the mechanical performance of the MREs, Chen et al. [10] used the carbon black along with iron particles in the non-magnetic elastomer.

In this work, the silicon rubber based isotropic MRE is fabricated. The MRE embedded sandwich beams with aluminum skins have been fabricated. A set up has been made incorporating permanent magnetic field with provision for varying the air gap between the magnet and specimen so as to change the magnetic field. The forced vibration analysis of the MRE embedded sandwich beam is done to study the dynamic behaviors.

2. Preparation of MRE and sandwich beams

Table 1. The composition of each MRE prepared

The shaker is driven by the voltage signal from the power amplifier. This voltage signal is generated by acquisition system output through PULSE Lab Shop. The laser sensor is used to measure vibration displacement at a single location, and this sensor could sense the velocity from 0 to 200 mm/s/V. The software, PULSE Lab Shop is used for obtaining and analyzing the acquired analogue signals from laser sensor through data acquisition. The Tesla gauge provided by Scientific Equipment and Services is used to measure the amplitude of strength of magnetic field.

The experimental procedure is summarized as follows; first the free vibration of the sandwich beam was studied. Then the forced vibration was studied. The PULSE Lab Shop is set using a swept sine actuation at a range of 0-300 Hz with 1 Hz increment. The voltage amplitude of the excitation signal is set at 200 mV. The signal output from the computer is send to the shaker through the amplifier. Shaker provides the external vibration over the test sandwich beam. The laser sensor acquires the vibration data for the test sandwich beam, which are then sent to the computer through controller and data acquisition system. 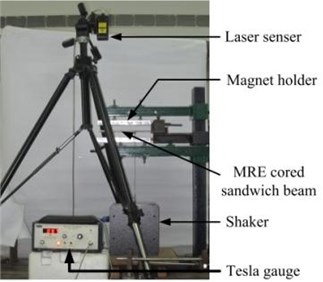 The input signal is processed in PULSE Lab Shop software in the computer. The outputs viz. natural frequencies, vibration response and vibration amplitudes are presented in the results for analysis.

The response of the vibration frequency of a structure subjected to an external dynamic force depends on the distribution of mass as well as the stiffness of structural elements. Likewise, the vibration magnitude is controlled by the damping behaviors of structure. Hence, the vibration behaviors of the magnetorheological elastomer embedded sandwich beams under different magnetic field amplitudes were studied with the help of their resonant natural frequencies.

Fig. 2 shows the vibration response of the sandwich beam with MRE core for the first three modes. In this test, the distances between the magnetic poles are varied to apply the required magnetic field intensities. The frequencies obtained from the experiment are presented in the Tables 2. It is observed that the modal frequencies of the sandwiched-beam increased as the magnetic field are increased. This shows that the trend of a frequency is towards right shift. 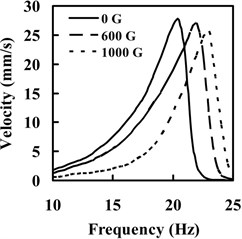 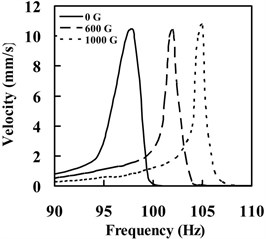 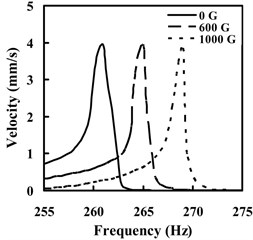 Fig. 3 shows the time responses for forced vibration of MRE cored sandwiched-beam to an impulse applied at free end in the absence and presence of a magnetic field (600 G). 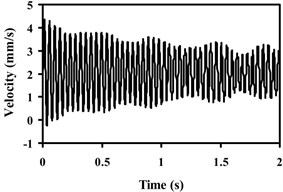 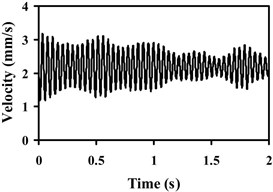 The data shows that the damping of the beam increases significantly with an applied magnetic field. The decay rate of the response in the plots of forced vibration in terms of damping ratio () can be explained as follows:

where corresponds to log decrement, vibration amplitude and number of cycles respectively. In case of sandwiched-beam with MRE core, the damping ratio equals 0.0031 without magnetic field and is increased to 0.0055 for a magnetic field of 600 G. It results a 43.64 % increase in damping ratio.

From this experimental study of MRE cored sandwiched-beam it has been observed that the natural frequency is found to be increased with an increase in magnetic field. The rise in magnetic field increases the shear modulus of the MRE causing the shifting of natural frequency due to the change in stiffness of the system. The logarithmic decrement method has been used for finding the damping of the system including the magnetic field effect. The damping ratio is found to be increased from 0.0031 to 0.0055 for MRE embedded sandwich beam.