Copyright © 2018 Aanchal Yadav, et al. This is an open access article distributed under the Creative Commons Attribution License, which permits unrestricted use, distribution, and reproduction in any medium, provided the original work is properly cited.

A considerable amount is being invested by the vehicle developers in reducing the power needed for propulsion. The vehicle is optimized such to reduce the aerodynamic drag as the drag force is the leading resistance to the motion of vehicle. The flow separation at the rear end of the vehicle is one of the major causes of this drag. This paper investigates the effect of the delta shaped aerodynamic devices, known as vortex generators, installed at the roof of a hatchback type car to delay the flow separation. Mostly vortex generators are used in aircrafts and faster road vehicles with a notch at rear like the sedans. This experiment, unlike the previous researches, investigates and compares the aerodynamic drag and lift of the hatch back vehicle with and without Vortex Generator. Here it is represented that the improvement in aerodynamic drag force reduction, although of very minimal amount, can be achieved by using VGs on hatch back type cars.

In today’s society, it has been determined by the energy analysts that the fuel consumption is increasing at alarming rate. Since energy is not a finite service, there have to be certain movements taken to improve the fuel economy in automobiles [1]. Improvement in the aerodynamics of the vehicle is one of the key concerns of the vehicle developers to advance the fuel economy [1, 2]. Aerodynamics helps to decrease the drag force, makes cars more stabilized and gives a chance of reducing fuel consumption. Pressure drag is the pressure differences in front and rear end of the vehicle, and as the ground vehicles are concerned, pressure drag contributes almost 90 % of the total drag [4]. It has been researched and found that there is 40 % of the overall drag force which is concentrated only at the rear of the vehicle [5]. The flow separation which takes place at the rear end of the vehicle is one of the key causes of aerodynamic drag [1, 3]. Many researchers have been researching on methods of the flow control over the vehicle. The methods found out are basically divided into two sections: active and passive flow controls. Active methods include modification in shape of the structure, steady blowing, suction and air jet, on the other hand passive methods comprise of adding some aerodynamic devices for e.g. spoiler, vortex generators, splitters etc. [5]. Because there is so much to adjust in a small vehicle including the passengers as well as their luggage, it is not very easy to have an aerodynamically ideal body shape. So, vortex generators are used over the bluff-like body of the cars. The effect of vortex generators on the hatchback type cars is been reviewed in this paper. Vortex generators are aerodynamic surfaces creating vortices in the medium [6, 7]. According to the researches and investigations it is concluded that the vortex generators modifies the inner structure of the boundary layer, making it more resistant to the separation [6], hence preventing the flow separation at the rear and also lowering the aero-acoustic noise [8], where it is installed. Mostly VGs are used in sedan type cars rather in hatchback type car because drag coefficient and lift coefficient for the hatchback design is much lower than the sedan design [9]. But this paper investigates the effect of VGs on hatchback type cars that how much drag and lift coefficients are varied after the installation of the VGs. Using VGs and spoilers on a car body are passive methods for reduction in drag force in fast moving cars. Our study is about passive means to improve the aerodynamics of hatchback type cars which already is one of the less researched fields since mostly these passive means for reduction of drag is usually used in fast sedan class cars. A passenger car is considered as a bluff body and generally coefficient of drag is between 0.2 and 0.5, and is greater than 1.0 [3, 10].

Vortex Generators are the aerodynamic passive devices which can be categorized as boundary layer manipulators [6, 8]. The function of a VG is to energize an opposing pressure gradient boundary layer and enhance its mixing which is about to separate, by conveying high momentum fluid from the outer part of the boundary layer down to the low momentum zone closer to the wall [6, 11-13].

As the downstream pressure increases at the point ‘C’ in Fig. 1, it creates a reverse flow opposing the main flow and creating drag. At point ‘A’, which is the upstream, there is no opposing flow because the momentum of the present boundary layer overcomes the pressure gradient. The point ‘B’ represents the balance between the momentum and the pressure gradient of the boundary layers.

Basically, vortex generators trail on the principle of exchange of momentum between the upstream and downstream flow. So, when it is installed it balances the pressure gradient between the upstream and downstream, eventually preventing the opposing forces [15]. The vortex generators are installed just before the separation point at the rear. They produce small vortices there, to shift the separation point a little further which allows the expanded air-flow to continue for some longer and hence decreasing the velocity with an increment in the static pressure at the rear. This increment of static pressure results in drag reduction by increasing the back pressure, following twin benefits: narrowing the separation region as well as raising the flow pressure at the separation [10, 14]. Though the vortex generators themselves increase the drag by creating small vortices in the flow, but still are used for vehicles because the amount of drag created by them is of negligible amount in comparison to the drag created by the vehicle’s structure. The overall effect of VGs can be calculated by totaling both the positive and negative effects of the VG on the vehicle [3]. Effect of delaying the flow separation and the amount of the drag by the VG itself is directly proportional to the size of the vortex generators. As the size of the VG increases it enhances the virtue of effectively delaying the flow separation but also increasing drag by its own structure. So, there must be some optimum height above which the increment does not work in a positive way. The optimum size of the VG is discussed further in the design section. 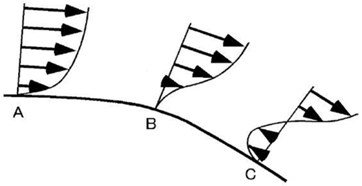 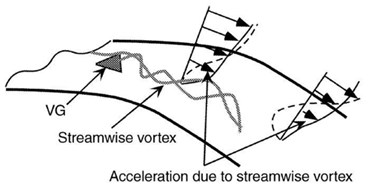 3. Designing of the Vortex generators

According to many researches the optimum height of the Vortex generators are defined almost equal to the boundary layer thickness [1-3, 6-11, 13-15].

30 mm is the boundary layer thickness at the roof end right away in front of the flow separation point [1]. Therefore, the most favorable height for the VG is found to be up to roughly 30 mm. A bump-shaped piece with a rear slope angle of 25 to 30° is found to be most suitable shape of the VG.

The location of Vortex Generators is selected at a point immediately upstream of the flow separation point and a point at a distance of 100 mm in facade of the roof end as shown in Fig. 4.

To minimize the drag it is important to design the bump-shaped VG smoothly curved at the front half contour and to cut the rear half in a straight line to an approximate angle of 27°. It is also to maximize the generation of a stream wise vortex.

On the other hand, the delta-wing-shaped VGs are installed at a yaw angle of 15° to the direction of airflow.

With help of oil flow measurement, the direction of the airflow was found to be different between sideways positions on the roof. The direction of airflow aligns with backward direction at the center of the car, this airflow starts deviating towards the center as the point of measurement shifts away from the central position. This is the reason why the delta-wing-shaped VGs must be installed at an angle of 15° alongside the vehicle centerline for the central position, while they must be installed at an angle near 0° for positions away from the center. The VGs which are delta wing- shaped VGs, according to the previous researches, were found out as less sensitive to vary in height than bump-shaped VGs. According to previous researches conducted it is concluded that the drag reduction effects for the VGs of different heights are almost the same. 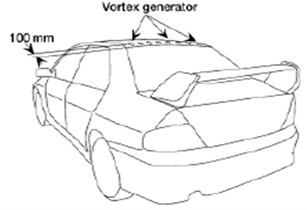 4. Geometry preparation of the car model

Modelling of the HYUNDAI i30 hatchback type car is done using Autodesk Inventor Professional 2013. The solid model of the car is made using 3 view method and extrusion with the help of following 3D surface model of the car. 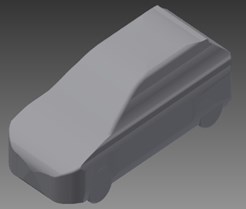 Fig. 7. Installation of VGs on the solid model 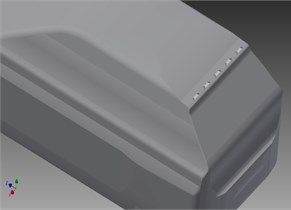 Autodesk Flow Design is general purpose preprocessor for simple CFD analysis, which is used here for the CFD investigation of the hatchback type car with and without vortex generator. The basic model and the model with VGs, which are created using Autodesk Inventor, are analyzed for flow variation and coefficient of drag at different wind speeds ranging from 5 m/s to 50 m/s. velocity as well as pressure contours are plotted against different wind speeds for both the models: with VG and without VG respectively. 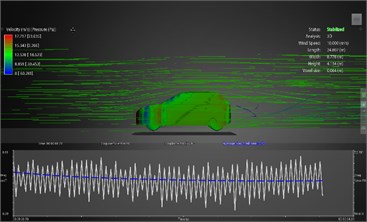 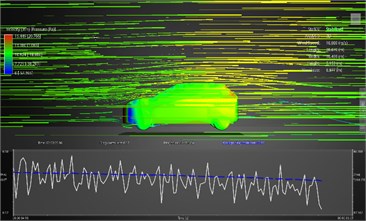 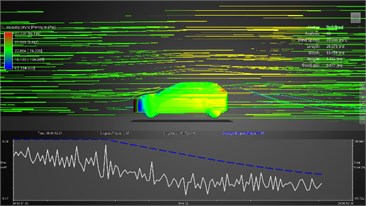 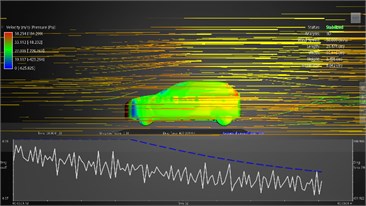 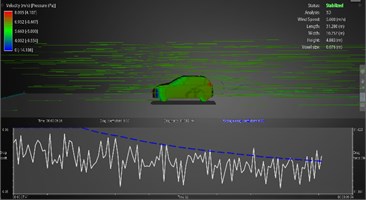 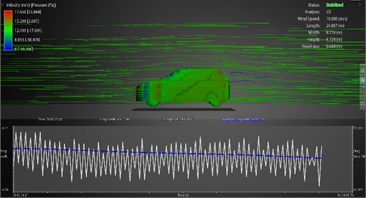 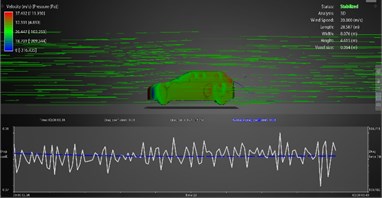 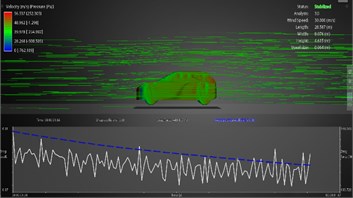 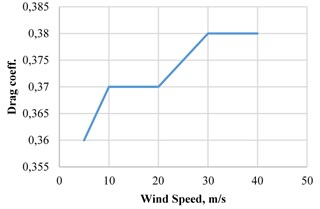 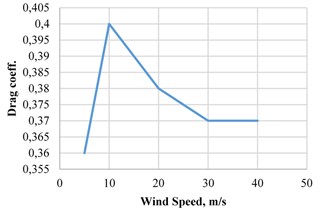 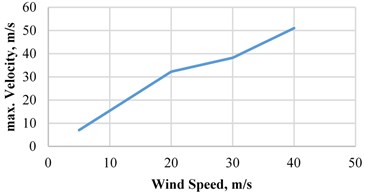 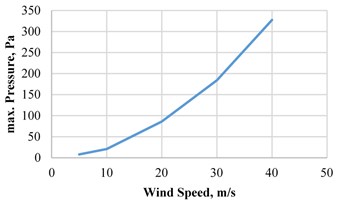 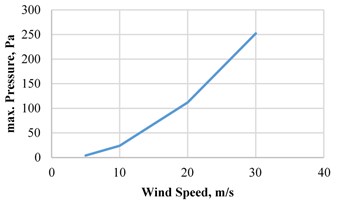 The conclusions of the study are summarized as follows:

2) The optimum height of the vortex generator is almost equal to the boundary layer i.e. 15 to 25 mm.