Copyright © 2019 Wang Zhaobing, et al. This is an open access article distributed under the Creative Commons Attribution License, which permits unrestricted use, distribution, and reproduction in any medium, provided the original work is properly cited.

Under the background of the big data era, the concept and technology of civil aircraft health management have been continuously innovated. This paper investigates the progress of health management technologies of mainstream manufacturers and airlines. Based on the analysis of operational data, this paper proposes a big data platform architecture for civil health management applications. Besides, the case of applying QAR data for prediction is introduced in the typical fault of air conditioning system, and the effectiveness of AR model in short-term trend prediction is verified.

With the application of the new generation of data acquisition and transmission equipment in the civil aircraft, the airborne system and engine monitoring capabilities continue to improve. Besides, the maintenance historical data is growing day by day. The annual operating data of the three major domestic airlines has accumulated tens of terabytes. These massive data will further change the maintenance mode of the aircraft and improve the operational performance of the aircraft. In the era of big data, more and more data collection and analysis tools will be added to the airline operation management in the field of aviation maintenance, providing technical support for maintenance and support personnel to determine the cause of failure and maintenance measures in a timely manner, and to arrange maintenance time reasonably. This enables predictive maintenance, increases aircraft dispatch rates, and reduces maintenance costs.

Boeing’s aircraft health management system is called the AHM system. Its architecture is based on the onboard maintenance system OMS+ air-ground data link + ground software platform AHM [1]. The system can provide real-time monitoring and decision support services for more than 42 % of the world’s 777 aircraft and 28 % more than 747-400. At the 2017 Paris Air Show, Boeing launched a data analysis service called AnalytX, bringing together more than 800 data analysis experts scattered across the company's business areas, using scientific procedures and methods to turn data into actionable customer solutions in areas such as fleet health management, fleet fuel consumption analysis, and fatigue risk management [2]. Airbus’s health management system is called the AIRMAN system. In 2017, Airbus launched the new aviation data open platform Skywise, which is designed to integrate data owned by operators, maintenance companies and manufacturers, and then use comprehensive data to conduct operational analysis and provide decision-making reference for them [3]. At present, Chinese domestic airlines are also actively exploring aircraft big data applications, such as Air China, China Southern Airlines, China Eastern Airlines, and Hainan Airlines. They have independently developed relevant systems for real-time monitoring and health management of aircraft, optimizing fleet maintenance and engineering management [4]. In the development of ARJ21 and C919, COMAC is also very concerned about the functions of the health management system especially in the era of big data.

The civil aircraft operation data can be divided into the following three categories according to the generation time and transmission mode. When the aircraft is in the air, the aircraft and the ground health management system mainly use the ACARS (Aircraft Communications Addressing and Reporting System) data link for data cross-linking, and in the future, it is possible to apply the ground-air broadband. When the aircraft is grounded, the data cross-linking method between the aircraft and the ground health management system is based on wireless data transmission (wireless Wi-Fi/3G). In aircraft ground maintenance, a large amount of unstructured data will be generated during the stoppage and inspection process, generated and stored according to different airline internal standards. The different types and descriptions of the data are shown in Table 1 below.

In order to better explore the value of data and create endless possibilities, it is necessary to build a big data platform for civil health management applications. The core is to collect and analyze the real-time state data during the operation of the civil aircraft and the massive information generated in the after-flight maintenance. With various algorithms and intelligent models, the system can monitor the status, diagnose and predict the fault, and then make appropriate decisions for maintenance activities based on the diagnosis or prediction information, the available resources and usage requirements. According to this platform, the problems of “over-repair” and “disrepair” can be avoided, the utilization rate of the system can be improved, and the contradiction between safety and economy in use and maintenance can be reasonably balanced to ensure the lowest cost of the whole life cycle. 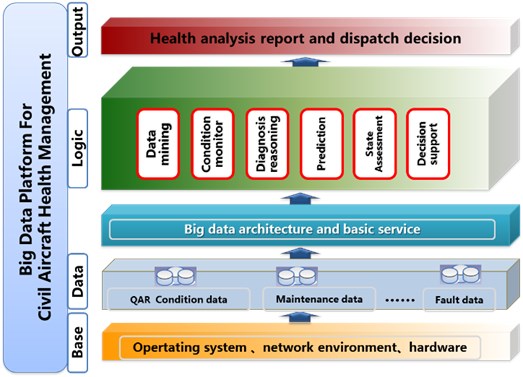 Based on the above ideas, we have developed a preliminary version of the data application platform and conducted related research on typical airborne system fault prediction. The following describes the typical fault of the environmental control system as an example.

3.1. Introduction to the environmental control system

Time series analysis requires less historical data and less workload, but it requires that the factors affecting the predicted object do not mutate. Therefore, it is suitable for short-term predictions with relatively uniform sequence changes and is not suitable for medium and long-term prediction. This method is mainly used to achieve trend prediction when there are no other states and events.

This paper mainly introduces the application of autoregressive model (AR) in this aspect. A model with the following structure is called a -order autoregressive AR model:

In the above formula, the time series {, , …, } are known measurement data and are assumed to be a zero-mean stationary random sequence, and is the number of measured data. , , …, are autoregressive coefficients, which are the parameters to be estimated of the model, s is the time point, is the independent white noise law obeying the mean value of 0 and the variance is , and for any < , there is no correlation between and . The model order p is determined using the Akaike information criterion (AIC), and the model parameters , , …, are determined using a least squares estimation method. The specific calculation method is not specifically described here, and other related papers can be referred to. 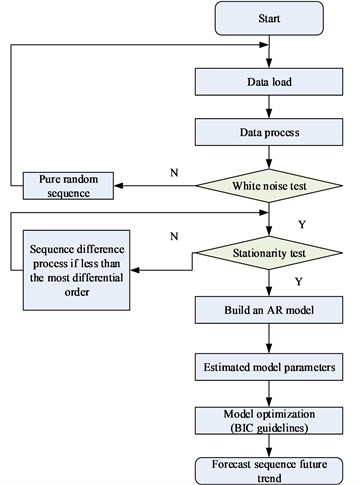 The process of AR model prediction is shown in Fig. 2 and can be described as follows:

a) Obtaining a sequence of observations;

e) Call the model to predict the parameter data.

For the typical failure mode of airflow component flow reduction, the QAR data air conditioning component flow parameter “AC PACK FLOW” of an aircraft of the B777 model is selected to establish a fault prediction model. The system takes the QAR data of the cruise phase of the two flights of the aircraft from January 24, 2015 to January 26, 2015 as input. The system performs preprocessing such as abnormal value elimination and automatic sampling on the parameters.

Then, the ARMA model is used to predict the trend of the airflow component flow data in the future segment. As shown in Fig. 3, the green curve represents historical data, and the red curve represents predicted data. Comparing the predicted data with the pre-defined normal range threshold (240, 400) of the parameter, the fault prediction result that the airflow component flow rate is too low in the 27th day segment is obtained. In this prediction, the system will also provide links to relevant FIM and AMM manuals to guide troubleshooting.

After verification, the prediction result is consistent with the actual maintenance record of the airline. The aircraft was repaired on January 28th. “The air flow is too small to replace the left and right air conditioning flow valve air filter”, which is in line with the data analysis results. On this basis, the system compares the predicted data with the real historical data, and the mean square error is about 96 %. The result is shown in Fig. 4, the red curve represents the prediction data, and the green curve represents the real history data.

This paper briefly introduces the progress of mainstream manufacturers and airline health management technologies, comprehensively analyzes the operational data related to aircraft health and proposes a big data platform architecture for civil health management applications. Besides, the typical case of the data application platform developed is introduced. The export flow parameters of the air conditioning system are taken as the object, and the AR model is applied to predict the state trend based on sufficient historical QAR data. The effectiveness of the AR model in short-term trend prediction is verified by comparing the predicted results with the actual operational data.