Simulation analysis of timing belt movement characteristics based on RecurDyn

Copyright © 2019 Guang Yang, et al. This is an open access article distributed under the Creative Commons Attribution License, which permits unrestricted use, distribution, and reproduction in any medium, provided the original work is properly cited.

The timing belt drive is composed of a closed ring-shaped adhesive tape with corresponding teeth on the inner peripheral surface and corresponding pulleys. During exercise, the toothed teeth mesh with the pulley to transmit motion and power. The vibration problem of belt drive has always been a hot research topic. In order to analyze the vibration problem caused by belt drive, this paper makes use of the multi-body dynamics software RecurDyn belt drive simulation model. Through the model displacement sensor and the system simulation results, the various movement characteristics of the belt are analyzed.

2. The basic algorithm of RecurDyn

The speed and virtual displacement of the point defined in the -- coordinate system are:

The corresponding amount in the -- coordinate system is defined as: 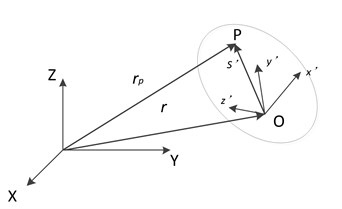 As shown in Fig. 2, there is a pair of adjacent components, let component () be the former component of the connection component (), and the position of the point is expressed as:

Defining , the angular velocity of component in its own reference coordinate system is given by Eq. (3):

where prime is determined by the axis of rotation.

Finding Eq. (4) subdivisions can be obtained:

The variable with a tilde symbol represents an oblique symmetric matrix consisting of vector elements in the vector cross product. Represents the relative coordinate vector. Substituting in Eq. (5) and multiplying both sides by a in Eq. (6) yields:

And . Simultaneously obtain the velocity recursive equations between the motions of adjacent components:

It is important to note that the matrices and are only the hinge relative coordinate functions of the connecting components () and ().

Similarly, the recursive relationship of virtual displacements is as follows:

3. The establishment of simulation model

Open RecurDyn software and click to select the Belt Kit. First, select the TimingBelt, and set the parameters as shown in the Fig. 3.

Click to select the Pulley Timing, which is also set as shown in the figure. 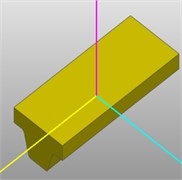 Complete the assembly of the timing belt on the pulley, add the rotation pair between the driving wheel and the earth, the driven wheel and the earth, and apply the speed drive. Then click the Distance Sensor icon under the Sensor module in the Belt Kit to set the displacement sensor. After the completion of the effect as shown. 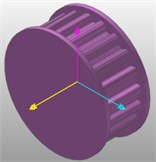 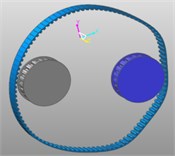 Dyn/Kin is called to simulate the model. Our initial simulation time is 5 seconds and the total number of steps is 100. Although the higher the number of simulation steps, the higher the accuracy of the simulation results [4], the longer the simulation takes. The simulation settings include the setting of the gravitational acceleration and the tension force. The direction of the gravitational acceleration is – direction, the size is 9806.65 mm/s2, and the tension force is set to 200 N-400 N. According to the set conditions, the system will calculate the model's displacement, velocity, acceleration, tension, and contact force.

Type ZA and ZB can be calculated using the following equation:

In the simulation animation, it can be seen that the speed of the synchronous belt suddenly increases under the driving of the driving wheel, and during the movement between the two pulleys, the timing belt vibrates, and a certain degree of sag occurs. After a period of operation, the belt and driven wheels operate at a constant speed to achieve a stable state.

It can be seen from the simulation animation that during the movement of the model, lateral vibration occurs in the synchronous belt, and the maximum value of the measured lateral pendulum momentum is about 0.221 mm, and the average value is 0.155 mm. The results of multiple measurements showed that there was not much difference from the above figure, and the error was within 0.1 mm, which fully met the requirements of measurement accuracy in national standards [5]. The time-dependent displacement curve of the belt along the direction in the coordinate system. The abscissa is time and the ordinate is displacement. As can be seen from the figure, the timing belt shifts periodically. After the start of the timing belt, after a small phase of movement, the descending segment in the direction visually indicates that the teeth have entered the meshing phase. The direction trough indicates that the timing belt reaches the leftmost end of the driving wheel, and the peak represents the rightmost position of the driven wheel. After a period of time, it re-enters the mesh and circulates in sequence.

From Figs. 6, 7, it can also be seen that the curve shows the lateral vibration characteristics when the timing belt reaches the meshing phase with the driven wheel after the first meshing of the timing belt and the disengaging of the driving wheel. Facts have proved that the turbulence along the direction is harmful, and the turbulence in this direction will lead to increased wear of the toothed teeth. If the belt speed is too high, a large amount of frictional heat will be generated, which will affect the use of the timing belt. Lifespan, so reducing the fluctuation in this direction will bring important significance to the drive. The movement situation reflected by the integrated displacement curve is in good agreement with the actual situation, and the simulation of the real situation can be achieved.

Fig. 8. The speed curve of the timing belt in three directions

Using RecurDyn Software a belt movement model is established to fully understand the dynamic characteristics of the belt driving process, and the movement of the system can be conveniently and intuitively observed through the movement of the solid model. At the same time, the dynamic parameters of the system can be obtained, for example, the timing belt along the movement process. Three directions of displacement, speed, acceleration and other parameters. The displacement sensor can also measure the lateral vibration characteristics of any belt in any part of the synchronous belt, which provides a basis for the study of the lateral swing of the timing belt.