Copyright © 2019 Shota Kiryu, et al. This is an open access article distributed under the Creative Commons Attribution License, which permits unrestricted use, distribution, and reproduction in any medium, provided the original work is properly cited.

The exact solution of structural dynamic related problems can be achieved by using the frequency-dependent spectral method. The exact solution is thought to be accurate while reducing the number of degree-of-freedom to resolve the cost and computational drawbacks. This paper investigates the vibrational characteristics of a Levy-type solution of thick plates considering shear deformation based on the two-variable Refined Plate Theory (RPT). The plates, which are modeled by an isotropic Levy-type rectangular plate, were solved by using the Spectral Element Method (SEM). The SEM for RPT Levy-type in the frequency domain is derived to formulate the free vibration problems of the plates. Transcendental stiffness matrices are well established in vibration, formulated from the exact solutions of the differential equations of the RPT Levy-type plate element. The present spectral element model has four line-type degree-of-freedoms (DOF) on each edge of the Levy-type rectangular plate. Natural frequencies of the plate are computed by means of the Wittrick-Williams algorithm. Numerical comparisons are given to show the effectiveness, efficiency, and accuracy of the SEM by using one element. Unlike the FEM, the SEM gives exact solutions of the natural frequencies of plates without element discretization procedures.

Plates are broadly used in engineering applications due to their valuable features, such as the high strength and stiffness to the weight ratios. Thus, the understanding of the free vibration of plates is indispensable to the engineers across disciplines [1-4]. A reliable and accurate free vibration analysis of plates is required to get safe and reliable designs.

Based on the theory of plates, the effects of shear deformation, particularly in thick plates, are not negligible. Even for thin plates that vibrate in high modes, the effects also need to be considered in the analysis. The Classical Plate Theory (CPT) does not consider the shear effects in the formulations. Hence, some plate theories have been developed to take the effects of shear deformation into the analyses of plates. Reissner [5], Mindlin [6] and Wang [7] developed theory of plates to consider the effect of shear based on the displacement functions assuming constant transverse shear stress through the thickness of the plates. A correction factor is needed to approximate the real shear stress in the plates. Librescu [8], Donnell [9] and Levinson [10] made necessary modifications to the classical plate theory to consider the effects of shear deformation in plates. There are many higher-order theories of plates proposed which are available in the literature. One such example is the two-variable Refined Plate Theory (RPT) [11] which uses two constituents for representing transversal displacement consisting of bending and shear displacements. It is worth noting that the RPT does not use a shear correction factor.

Finite Element Method (FEM) is one of the major and common computational methods available in many fields of science and engineering. The vibration modes of a plate vary depending on the vibration frequencies and its wavelengths. To obtain a sufficiently accurate dynamic response, all necessary high-frequency wave modes have to be considered in the analysis. The size of meshes must be sufficiently small to be used in the modeling. Because the conventional FEM is formulated based on the frequency of independent polynomial shape functions, thus the FEM cannot accommodate all essential high-frequency wave modes without fine discretization. Hence, the FEM solution becomes less accurate, particularly at high frequencies, where the frequencies are related with short wavelengths.

To improve the accuracy of the solution is by using the shape functions, which depend on the natural frequency of the plate. Hence, the shape functions depend on the frequency which are known as the dynamic shape functions. The dynamic shape functions can be considered as necessary in high-frequency wave modes, exceptionally highly accurate solutions can be obtained, and it is not necessary to refine the meshes. This sophisticated concept has directed to the so-called Dynamic Stiffness Method (DSM) [12, 13]. Because the dynamic shape functions are formulated by using exact dynamic stiffness matrix, they treat the mass in a structure member implicitly. Therefore, a regular shape of rigid plate model can be modelled by a single element, irrespective of its length between any two continuous structural or material discontinuities, to obtain exact solutions. The need to refine a regular part of a structure into multiple fine meshes is not necessary. The size of the problem will significantly be reduced by using the least number of meshes and DOFs. As a result, this will significantly reduce the computational time and cost and improving the accuracy of solution by decreasing the errors of computer round-off. Also, the DSM produces infinite number of Eigen solutions by using the exact dynamic stiffness matrix represented by the least number of DOFs. Alike with the formulation of the conventional finite element stiffness matrices, the stiffness of the exact dynamic matrices can be assembled in a similar way as in the FEM. Therefore, in the DSM, the procedures of elements meshing and assembling are very similar with the way in the FEM.

Narayanan and Beskos [15] combined the features of the SAM with those of the DSM by introducing the new concept of the Spectral Element Method (SEM). As illustrated in Fig. 1, the SEM can be considered as the mixture of the main features of the FEM, SAM, and DSM.

Kiryu and Gan [16] have derived and implemented the free vibration problems of isotropic Levy-type plate theory by using SEM. The results show excellent agreement compared with the CPT values reported in the literature.

In this study, the free vibrations of rectangular plates are analyzed. The Levy-type plate theory is based on the first order shear deformation plate theory and the governing equations which can be obtained from both the Hamilton principle and Maxwell equation. The exact natural frequencies of the free vibration plate are investigated. Comparison studies are performed to validate the SEM results. Moreover, the closed-form solutions of isotropic plate based on the RPT [11] is also referred for verification purposes. The effects of plate size aspect ratio on the natural frequencies of the isotropic Levy-type plates are studied and discussed.

Fig. 1. A schematic diagram of the spectral element method 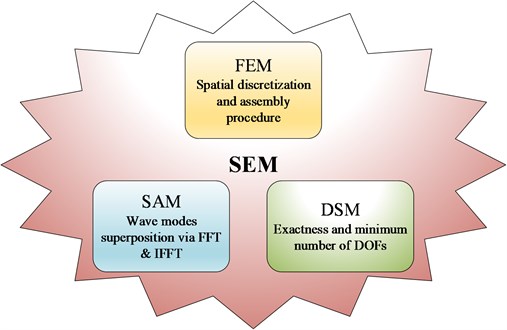 The levy-type plate is defined by a rectangular plate with at least two parallel sides are simply supported and arbitrary at the other edge boundary conditions. The governing equations yield to the coupled partial differential equations which can be decoupled by introducing supplementary functions. The equations that decoupled can be analytically solved by using SEM.

2.1. The equation of motion of a Levy-type plate

Fig. 2 shows a rectangular Levy-type plate with two simply supported sides parallel to the -axis and the other two arbitrary boundary conditions at the opposite parallel sides to the -axis. 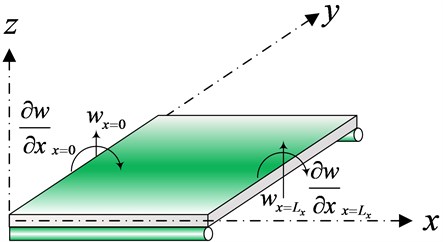 The Levy-type plate has the size of and in the and -directions, respectively. The homogeneous partial differential equations of free vibration considering shear deformation, the transverse displacement of the plate is given by the two-variable RPT as:

The governing equations of the bending moment and transverse shearing force of the plate along the -direction boundary can be given as:

where, is the mass density, is the thickness and is the bending rigidity which is defined by , is the Poisson’s ratio and is the elastic modulus of the plate. The first and second terms in Eq. (1) stand for the shear and bending vertical displacements of the plate.

Assuming the displacement of the plate in -domain spectral in the following form:

where, and are the assumed shear and bending -direction displacement functions which are expressed by exponential series as follow:

By assuming the and solutions in -domain spectral form as:

where is the sampling number and the wavenumbers in -direction which is given by:

After some derivations and substitutions, Eq. (1) can be written as:

The general solution of Eq. (9) can be assumed as:

Substituting Eq. (10) into the spectral governing equations of Eq. (9), results in:

Per definition, the Levy-type plate is defined by a rectangular plate with at least two parallel sides simply supported and arbitrary at the other edges boundary conditions.

The spectral DOF of a simply supported condition of the plate with the boundary conditions at 0 and ; is given by:

In the matrix form, by applying the boundary conditions, the resultant transverse shearing force and bending moment of the plate in Eq. (2) along the -direction boundary can be given as:

The constant vector can be eliminated by taking the inverse of Eq. (14) and substituting into Eq. (17) to obtain the force-displacement relationship of spectral element governing equation for the Levy-type plate element as follow:

The size of the matrix is 8×8 which is the function of natural frequency and wavenumber .

Consider the geometry of two different aspect ratio of width and length of Levy-type plates as shown in Fig. 3. The following material properties of the isotropic plate are used in the calculation: mass density 1.0; elastic modulus 1 and Poisson’s ratio 0.3. The shear modulus is computed from . The plates are restrained at both opposite parallel sides by simply supported boundary conditions. Non-dimensional natural frequencies of simply-supported SEM plate with 0.1 for 1 to 5 are computed.

The natural frequencies of the plates are found by solving the homogeneous equation of the spectral element model of Eq. (18):

The natural frequencies , are solved by using the condition that the determinant of is zero at , that is:

The present method using SEM featured with the FEM meshing and assembling capabilities was proved to be effective and efficient to solve free vibration problems of two-variable RPT plates. The present SEM gives a good accuracy of the natural frequencies of plates without element discretization procedures necessary. The present SEM has shown that the transcendental stiffness matrices which are well established in free vibration problems can be derived from any theories provided with the governing differential equations of the plate element. The effectiveness of the Wittrick-Williams algorithm also has been found suitable for use in the SEM formulation, as opposed to the approximation method by using the FEM.