Copyright © 2020 Xin Li, et al. This is an open access article distributed under the Creative Commons Attribution License, which permits unrestricted use, distribution, and reproduction in any medium, provided the original work is properly cited.

Another type of multifrequency excitation is a single excitation with multiple spectral lines [16, 17]. A study by Bakri et al. [18] found that systems exposed to multifrequency excitation do not exhibit bifurcation or strange attractors provided the system is symmetrical and appropriate parameters are chosen. Andrea L Facci et al. [19] studied the viscoelastic vibration of a beam in water and found nonlinear damping to exist, which was correlated to the vibration frequency. M. Eissa et al. [20-22] used a longitudinal vibration absorber to effectively reduce the pitch and roll vibrations of a ship. Jon Juel Thomsen studied the characteristics of nonlinear vibration systems exposed to multifrequency excitation sources with high frequency bands [23] and the vibration of multicylinder diesel engines was also investigated [24]. These efforts do not consider the existence of multiple excitation source. When multiple excitation sources are in different positions and have different connection modes, their effects on system stability are different. This is also the place where these studies can continue to deepen. 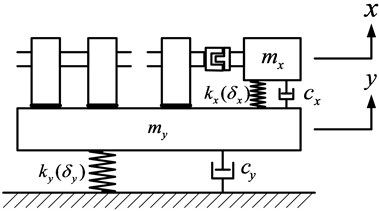 When 2, the vibration equation still represents multidisturbance vibration, and the equation can be simplified. Eq. (1) can be transformed into:

Using the multiscale method [26] and introducing a small perturbation parameter to perform a scale transformation of small items in the same equation:

Substituting Eq. (3) into Eq. (2) and retaining the terms containing and :

Next, the vibration situation under combined resonance was considered, i.e., the relationship between the following excitation frequencies was considered:

where and are adjustment parameters.

The solution of the equation can be written as follows:

where is the fast timescale and is the slow timescale.

Furthermore, differential operators can be defined as:

Substituting Eqs. (6) and (7) into Eq. (4), and comparing the coefficients of the same order on both sides of equation:

where and are the functions of slow time ; and are the conjugate complex numbers of and ; , , and. and are the excitation source frequencies of units with an elastic connection.

Substituting Eq. (9) into Eq. (8b) and eliminating the secular terms:

Then, and can be written in polar form as:

where real numbers , , , and are the functions of slow time .

Substituting Eq. (11) into Eq. (10) and separating the real and imaginary parts:

Two scenarios also exist for the solution of Eq. (13): (a) Only one solution is available, and in this case, the system is stable; (b) The equation has three solutions, and in this case, the phenomena of saddle node bifurcation and jumping in the amplitude–frequency curve can occur. The number of solutions depends on the excitation intensity. When the equation has only one solution, the critical excitation amplitude is:

Eq. (14) shows that the critical excitation amplitude is related to both the damping and stiffness of system.

Eqs. (5), (9), and (11) can be combined to obtain the vibration displacements of unit with elastic connections and raft frame as follows:

Eq. (15) shows that in the coupled state, only one frequency exists when the raft frame () vibrates. In contrast, when the unit with an elastic connection vibrates, two additional frequencies ( and ) exist in addition to the frequency of its own excitation source. Among them, the vibration corresponding to frequency is caused by internal resonance. This vibration is absent in the uncoupled state.

When the floating raft system is in the uncoupled state, the stability of steady solution of raft frame vibration is the stability of autonomous system at the singular point . The system is forced to undergo a linear transformation.

By linearizing Eqs. (12c) and (12d) at the singular point , the autonomous differential equations for disturbances and can be obtained as:

By utilizing to eliminate in the above equation, the feature equation can be obtained as:

The boundary of unstable region can be determined using Eq. (20).

The parameters of floating raft used in the simulation are shown in Table 1 [27, 28]. 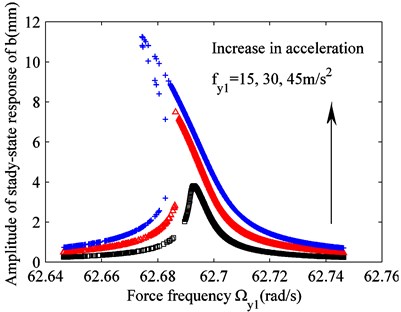 Fig. 3. Effect of varying the excitation on raft frame vibration 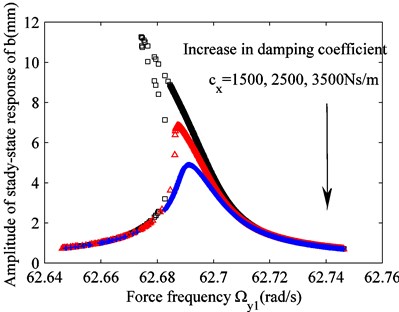 a) Variation in damping coefficient

b) Variation in nonlinear stiffness

Although the elastic components of floating raft system are hard springs, the combined force of springs in the upper and lower layers provides the characteristics of a soft-spring vibration system; therefore, the skeleton curve of amplitude-frequency curve bends to the left. This suggests that although the soft spring is not actually applied, the hard spring vibration state (occurring at the unit with an elastic connection in the upper layer) and soft spring vibration state (occurring at the raft frame in the center) can simultaneously exist in the floating raft system.

When the excitations are 45 m/s2 and and the nonlinear stiffness and damping are 1.3×105 N/m and 1.5×103 Ns/m, respectively, the effects of damping and nonlinear stiffness on the raft frame vibration can be obtained, as shown in Figs. 3(a) and (b), respectively. Combining this result with Eq. (14), it can be concluded that the critical excitation required to cause system instability increases as the damping increases. Therefore, under the same excitation , the vibration displacement of raft frame decreases as the damping increases, and the system remains stable. Conversely, as the nonlinear stiffness increases, the amplitude of vibration displacement of raft frame remains unchanged. However, the frequency band corresponding to unstable solution increases, and the curvature of skeleton curve of the amplitude–frequency response also increases. Thus, the system becomes unstable. This shows that damping exerts the opposite effect on system stability compared to nonlinear stiffness. 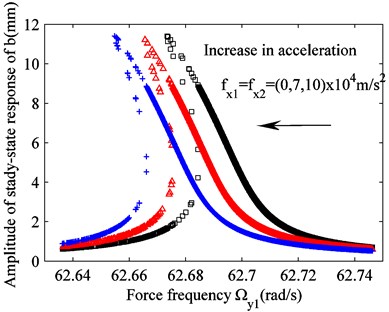 Fig. 5. Effect of varying stiffness and damping parameters on the unstable region of solution 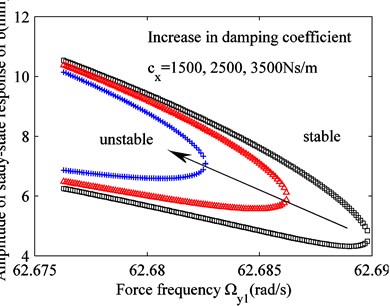 a) Variation in damping coefficient 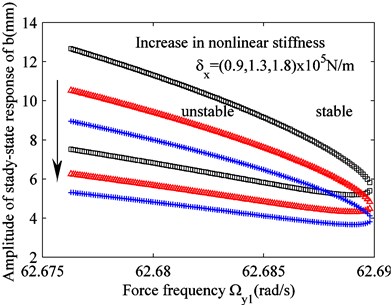 b) Variation in nonlinear stiffness

Fig. 6. Effect of varying excitation on the unstable region of solution 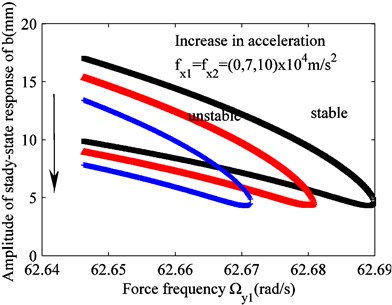 Fig. 7. Variation in the stability of solution at different excitation frequencies 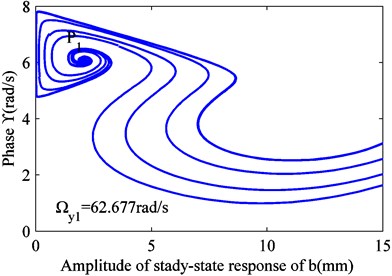 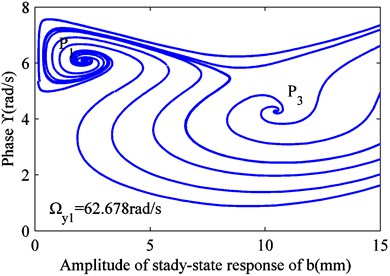 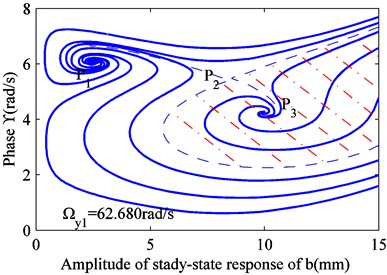 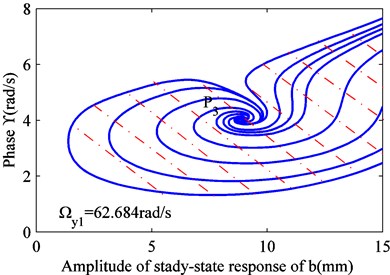 Fig. 8. Variation in stability of solution under different excitations 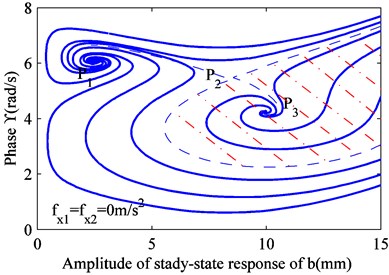 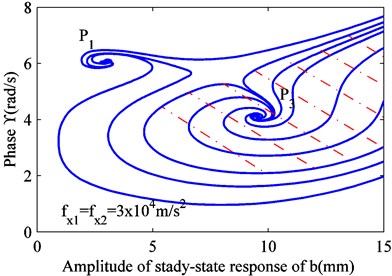 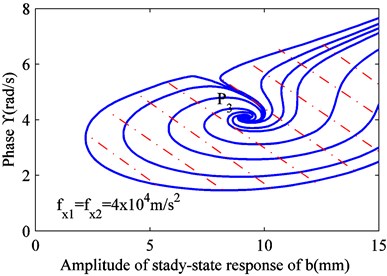 Factors affecting the vibration of a raft frame in the uncoupled state were discussed. Now, the coupling state is analyzed. 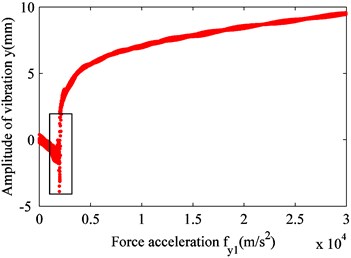 a) Jumping of vibration amplitude 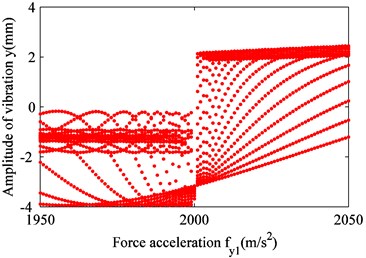 b) Magnified region of curve 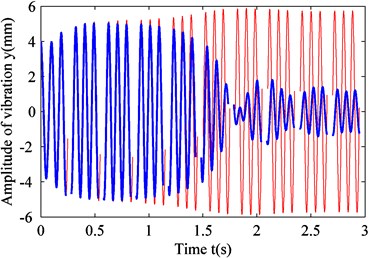 In this study, the vibration characteristics of a floating raft system under multiexcitation condition were analyzed. The multiscale method was used to solve the equation for floating raft vibration under multiexcitation condition, and a stable region of the solution was determined. Factors affecting the vibration stability of raft frame were studied, in particular, the effects of different excitation sources. The conclusions are as follows:

1) Although the floating raft system does not use a soft spring, the location of raft frame within the intermediate layer results in vibration that fits the pattern of a soft spring, because of the combined force of hard springs in the upper and lower layers. The skeleton curve of amplitude-frequency response bends to the left.

2) A critical value of excitation exists for the unit with a rigid connection. Excitation intensities exceeding this threshold compromise the stability of raft frame vibration. The critical value depends on the damping and nonlinear stiffness of system. As the damping increases, the nonlinear stiffness decreases, the unstable frequency band narrows, and the raft frame vibration becomes more stable.

3) The excitation of unit with an elastic connection has the same effect as increasing the virtual mass of raft frame, increasing the stability of floating raft system.

In summary, to increase the vibration stability of a floating raft system, the units connected to raft frame should have elastic connections where possible.