Copyright © 2019 Rujia Wang. This is an open access article distributed under the Creative Commons Attribution License, which permits unrestricted use, distribution, and reproduction in any medium, provided the original work is properly cited.

In the method of far-field acoustic holographic noise identification, the Kirchhoff formula has been widely used. Achievement of reconstruction is the outstanding advantage of acoustical holography over the widely-used beam-forming method. In this paper, the mechanism of acoustical holography based on finite Kirchhoff diffraction is established, the relationship between holographic aperture angle and the quantitative accuracy is revealed. With simulations for known sound source, the quantitative mechanism is validated successfully.

where is the frequency domain sound pressure of the point in holographic plane, is the wave number, is the holography constant, is the distance between point in measurement plane and . is the conjugate sound pressure of point . From Eq. (1) and Eq. (2), it can be seen that without considering Doppler-effect and discretization error, the main quantitative error theoretically comes from the finite integral domain. In another word, the integral domain error stands for the quantitative accuracy of Kirchhoff diffraction Acoustical Holography. 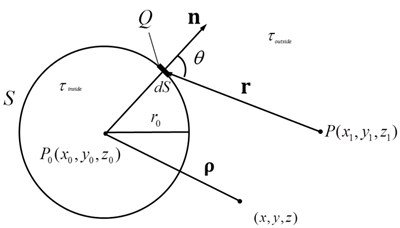 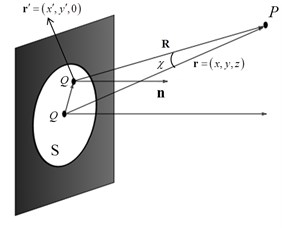 In the practical measurement of two-dimensional microphones-array, the surface S is a finite and discrete plane. For finite Kirchhoff diffraction conditions, Huygens-Fresnel principle and Fresnel diffraction schematic diagram are shown in Fig. 1 (b). Spherical waves are radiated by any secondary point source in the plane . Located in space , the coordinates of the point source is . is the sound pressure. is the displacement vector from to . For point sources, Eq. (3) and Eq. (4) From Eq. (1) as follows:

where is the sound source amplitude and is the angle between sound source and holographic plane. Then the closed spherical surface and finite planar Kirchhoff diffraction models are separately shown in Fig. 2. 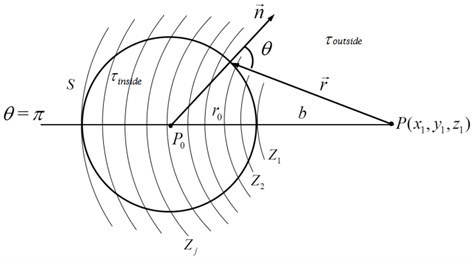 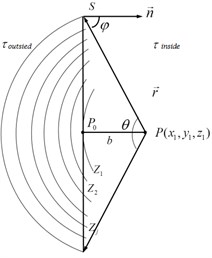 where is a dimensionless inclination factor which changes with the angle . In Eq. (5), 1, , . In order to calculate the integral in Eq. (5), Fresnel’s zone method is applied as shown in Fig. 2. Take point as the centre and , , , , ..., as radius to draw a series of spherical surface , , ..., , …, are deemed same between neighbouring under the condition that the zone is narrow enough. In plane , the differential surface element is calculated as Eq. (6):

where is azimuthal angle round axis. This formula converts into three steps as Eq. (7) shows:

So, the contribution of the th wave zone to is:

Calculate the integration, can be expressed as Eq. (9):

The factor can be neglected in the far field condition, which means that the measurement distance is more than 20. Under this approximation, the integral result can be converted to Eq. (10):

Eq. (10) shows the relative value between the reconstructed holographic result and the theoretical reference value (). Fig. 3 gives the curve of changing with the aperture angle from 0 to .

Fig. 3 shows the calculated quantitative accuracy against the aperture angle. 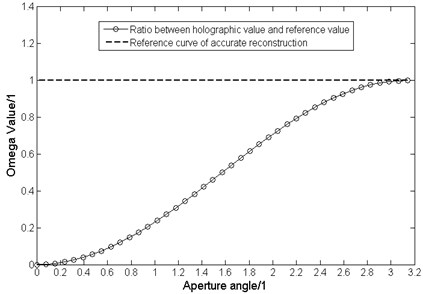 The far-field sound source identification simulation of finite Kirchhoff diffraction is carried out by Huygens-Fresnel theory, and the limit of accurate prediction is studied. A near-uniform grid microphone array measures a 1000 Hz point source at a distance of 2 meters. Table 1 and Fig. 4 show the relationship between the reconstruction result and the inclination coefficient considering the aperture angle.

As can be clearly seen from Fig. 4, when the aperture angle increases, the reconstruction results gradually reach the actual value. For tilt factor curves and curves, the fitting of the two curves proves that the critical holographic aperture established in our work is effective for determining the boundary conditions of Kirchhoff diffraction acoustic holography, and the fitting curves are in good agreement with the theory value.

The results can provide the basis for improving the quantitative accuracy of acoustic holography. The reconstruction with a fixed coefficient which can be obtained based on the known sound source.

From the theoretical derivation, the limiting conditions are clear that the sound source must be high-frequency to ensure the Fresnel’s zone is narrow enough for approximation. The microphone array should be extremely close-set to ignore the discretization error, although this will affect the result of flow filed computation greatly. 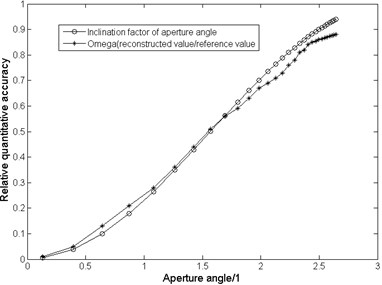 The results were shown that the spherical wave incident result produced by the wave-front preparation is equivalent to the result of the aperture plane formula at the incident wave plane. The simulation results were shown that the fitting curve of Kirchhoff acoustic holography agrees well with the theoretical value. However, according to the assumptions adopted by our approach, there are still some academic research will be done in the future.

This work is based on the research of Project 51805229 and Project 51705221, supported by the National Natural Science Foundation of China.