Copyright © 2019 Xiaohua Tan, et al. This is an open access article distributed under the Creative Commons Attribution License, which permits unrestricted use, distribution, and reproduction in any medium, provided the original work is properly cited.

In this paper, vibration modal analysis of a horizontal axis micro wind turbine blade of different rotational speeds was carried out by using the finite element analysis software COSMOSWorks. The dynamic stiffening phenomenon and its effect on the vibration mode of the wind turbine blade were taken into account. Numerical results were analyzed and compared. The analysis can help not only to ensure the reliability of system operation but also to improve the structural performance.

The blade structure is flexible due to its mechanical properties; therefore, vibration is inevitable when loaded by the randomly alternating wind. The blade undergoes tensile stress due to centrifugal force when spinning around its axis at high speed, which leads to dynamic stiffening phenomenon [5].

Micro wind turbines are usually referring to the ones that the rated power is less than 1 kW and the rated voltage range is between 12 V and 48 V [6]. They have low requirements for wind energy resources and owning the advantages of compact structure and convenient installation. So far, there is still a lack of simulation and detailed comparison about the modal of micro wind turbine blades using COSMOSWorks. In this paper, a three-blade micro-wind turbine with 500 W rated power was studied. Modal analysis of the wind turbine blade was carried out by using the FEM software COSMOSWorks. The anisotropic mechanical properties of the FRP laminates and the dynamic stiffening effect of the blade were comprehensively considered, and the vibration modal simulation of the blade was calculated and analyzed.

2. Analytical theory of the blade modal

Each structure has an inherent vibration frequency, called resonant frequency. Once resonance frequency is activated, the structure will show a vibration statue, namely vibration mode. In structural static analysis, the node displacement is a main unknown quantity [7]. The vibration equation is:

where is the stiffness matrix, is the unknown amount of node displacement, and is the known amount of node load. In dynamics analysis, damping matrix and mass matrix must be considered [8]. Therefore, a typical damped oscillatory vibration equation is:

where , , and represent the finite element node acceleration, velocity, displacement and the role of external force vector respectively. When there is a lack of damping and external forces, the blades are free to vibrate at this time. Eq. (2) simplifies to:

Since there is no external load, the solution of the equation reflects the inherent properties of the structure, namely frequency and vibration mode [9, 10]. Eq. (3) can be converted to:

Eq. (4) is the generalized eigenvalue equation of the blade structural dynamics. The unknowns in the formula are the eigenvalues and eigenvectors of the leaf structure [11].

Due to the coupling of large displacement and small deformation, flexible mechanical system usually exhibits dynamic stiffening phenomenon [12]. Miniature wind turbine blade is an elastic mechanism manufactured by FRP composite material, it will subject to centrifugal force when the impeller rotates around the shaft at high speed. The tensile stress caused by centrifugal force will affect the blade deformation. That is, the interaction between the rotation of the shaft and the deformation of the blade leads to the increase in the blade rigidity, which is the so-called Dynamic Stiffening.

Wind turbine blades are commonly manufactured by special composite material composed of two or more different materials with different properties. Its main advantage is high specific stiffness (ratio of height and weight). Due to orthotropic, it is necessary to define the material properties in different directions. Commonly used in wind turbine blades, Fiber Reinforced Plastic Material (FRPM) owns the advantages of light weight, corrosion resistance and designable rigidity. The mechanical properties of the FRP composite material also differ with the compound ratio. The material properties studied in this paper are as shown in Table 1.

Table 1. Material properties of the blade

In this paper, a suitable airfoil shape was selected by Profili software, and the airfoil data and aerodynamic parameters was obtained in the meantime. The blade was divided into several sections. Basing on Glauert theory of blade design, the chord length, mounting angle and airflow angle were calculated by using Matlab programming. Then the actual three-dimensional coordinates of each section of the blade were obtained basing on the point coordinate transformation. Finally, SolidWorks software was applied for solid modeling [2].

As a build-in finite element analysis software of SolidWorks, COSMOSWorks can seamlessly import model without losing blade features. Therefore, the blade modal analysis was carried out under the SolidWorks interface environment. During the mesh procedure of finite element analysis, tetrahedral elements were used for the solid geometry partition, which can guarantee a credible meshing. There are four nodes for each tetrahedron, corresponding to the four corners of the tetrahedron. Each node has 3 degrees of freedom, which means that the node displacement can be completely represented by 3 components.

Fig. 2. The mesh diagram used for the FEM model of the blade

The natural frequency and vibration mode of components mainly depend on their stiffness distribution and mass distribution. Therefore, the modal analysis of the blade only needs to define the constraints. Two types of constraints are commonly used for blade. The first is the complete restraint of the entire root cross-section. The other is to impose constraints on the width of the support section in the root section, i.e. without considering the transition surface, only the extent of the support section is considered to be a constraint on the blade. Taking into account that this study involves different speeds under the influence of dynamic stiffening on the blade, the second method was adopted. The constraint on the petiole part is shown in Fig. 3.

Fig. 3. The fixed constraint on the blade handle 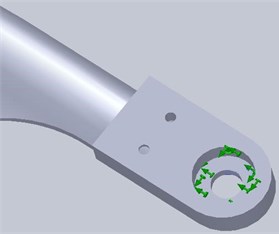 In order to analyze the influence of centrifugal force on the stiffness, the first ten modes of modal analysis and the modal comparison of the blades at different rotational speeds were carried out. The obtained modal of a statical blade and a blade rotating at its rated speed are shown in Fig. 4 and Fig. 5 respectively.

Fig. 5. Modal analysis diagram of a blade rotating at the rated speed of 360 rpm 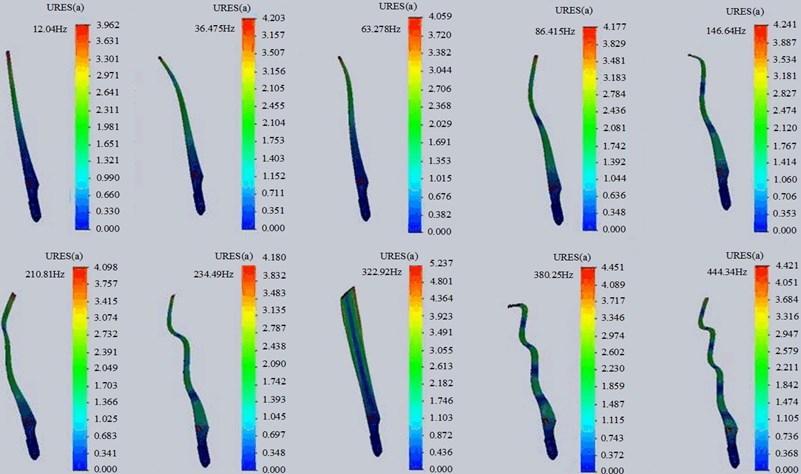 A modal analysis of a three-blade wind turbine blade was carried out by using COSMOSWorks in this paper. Through the modal analysis of blades, it can be concluded that the obtained minimum frequency of rotating blade is greater than the frequency obtained in static state due to the role of dynamic stiffening. Therefore, resonance can be effectively avoided, and ensures safe and reliable operation of the system.

This work was financially supported by the National Natural Science Foundation of China (No. 11702193 and No. 11772227), Scientific Research Project of Tianjin Municipal Education Commission (No. 2017KJ108 and No. 2017KJ113), the Research Project of Tianjin University of Technology and Education (No. KYQD1702 and No. KJ1705), and the Training Plan for Young and Middle-aged Backbone Talents of Tianjin Universities and Colleges (No. RC180204).