Copyright © 2019 Feng Yu, et al. This is an open access article distributed under the Creative Commons Attribution License, which permits unrestricted use, distribution, and reproduction in any medium, provided the original work is properly cited.

A 3d model of crank connecting rod of a single cylinder internal combustion engine (ICE) is established, whose force analysis was carried out in ADAMS/VIEW using virtual prototyping method. It was found that the results between the analysis and the theoretical calculation results were basically consistent, indicating that the established model is correct and reliable. In order to reduce the inertia force and torque of this ICE, the uniaxial balance method was used to carry out the vibration reduction design based on the balance shaft. The results of virtual experiments showed that the single cylinder internal combustion engine with a balance shaft can greatly reduce the inertia excitation force as well as improve the vibration.

For single cylinder internal combustion engines, the main source of vibration is the inertia force and torque generated by reciprocating motion of crank connecting rod mechanism. In order to improve the vibration performance of the internal combustion engine, the inertia excitation force should be reduced or balanced, which can be effectively achieved by a vibration reduction method based on balance shaft [1-4].

According to the traditional pattern of product design, physical prototype should be produced for each sample in order to obtain better design scheme. After that, the prototype will be put into the vehicle for testing and be further modified unless meeting the expected requirements.

Such approaches are not only inefficient, but also a serious waste of human and material resources. Thanks to the development of computer technology, virtual prototype technology [5, 6] has gradually replaced the traditional design methods, thus reducing the manufacturing and testing of physical prototype and shortening the period of product development with less cost.

Based on the virtual prototype technology, a virtual prototype model of crank connecting rod mechanism of a single-cylinder four-stroke internal combustion engine was established in ADAMS/VIEW, whose kinematic performance was simulated and verified by theoretical calculations. In order to reduce its vibration, a balance shaft was designed according to the uniaxial balance method. The results of virtual experiment showed that the engine vibration was significantly improved after adding the balance shaft.

According to the drawings provided by the manufacturer, the 3d model of the single-cylinder four-stroke internal combustion engine is established by UG. From the 3d model, the crank, connecting rod, piston and other components closely related to the vibration of the internal combustion engine are extracted. According to the constraint relation, the dynamic model as shown in Fig. 1 was established in ADAMS/VIEW.

On the basis of the bench test results, the vibration of the single-cylinder internal combustion engine is quite severe at the speed of 6000 r/min, so the vibration analysis was carried out at this speed. The pressure curve at 6000 r/min was measured by the combustion analyzer. 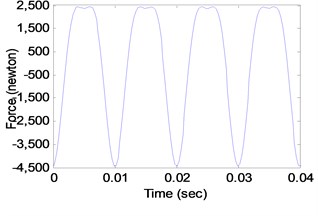 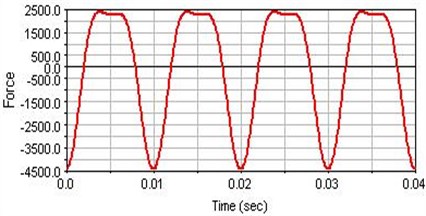 The vibration of the single cylinder ICE is serious according to the bench test, mainly influenced by the inertia force and turning moment. In order to address this issue, the inertial force of the ICE must be balanced.

Excessive balance method is shown as Fig. 3, excessive balance mass is put at ,which is the extention of crank, to make the component force of the centrifugal force along the piston movement direction is opposite to the direction of the piston reciprocating inertial force, thus being able to balance all or part of the piston reciprocating inertia force according to the mass of counterbalance, however additional force would be produced in the direction [10, 11].

Excessive balance method is suitable for ICE of low displacement while needs to be matched with the frame, which is not good for the fuel economy as well as the development of internal combustion engine.

The principle of the biaxial balance method is shown in Fig. 5. With the help of idler 2, gear 1 mounted on the crankshaft drives gear 3, which is engaged with gear 4 mounted on another shaft. Both of them rotates at the angular speed of the crankshaft. Counterbalance is installed on shaft of gear 3 and gear 4. When the crankshaft rotates, the component of the rotary inertia force generated by the balance weight in the direction will be balanced with the first-order reciprocating inertia force of the internal combustion engine, and the additional force in the direction is also balanced. 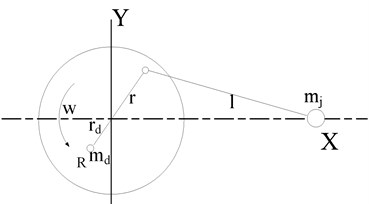 Although biaxial balance mechanism can completely balance the first-order reciprocating inertia force of the internal combustion engine, it is not suitable for the vibration reduction design due to its complex structure and the need to increase the cylinder diameter, which will increase the cost.

The dynamic model of the crank connecting rod mechanism with balance shaft of the single-cylinder internal combustion engine is established in ADAMS\VIEW, as shown in Fig. 7. 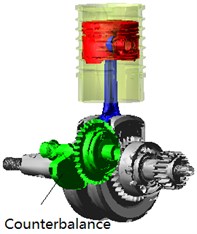 The model is analyzed at the speed of 6000 r/min. The inertial excitation force before and after balancing is compared as shown in Fig. 8.

b) Perpendicular to the piston direction

Fig. 9. Comparison of inertial excitation forces before and after installing the balance shaft of internal combustion engine

a) Excitation force perpendicular to the piston direction 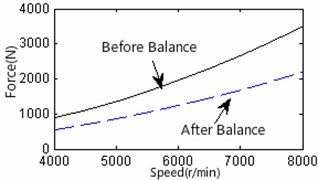 b) Resultant force of ICE body

1) In ADAMS/VIEW, the multi-body dynamics model of crank connecting rod mechanism of a single cylinder internal combustion engine was established, and the virtual experimental simulation analysis was carried out. It was found that the results between the analysis and the theoretical calculation results were basically consistent, indicating that the established model is correct and reliable.

The authors disclosed receipt of the following financial support for the research, authorship, and/or publication of this article: this study was supported by Chongqing Municipal Education Commission Science and Technology Project (Nos. KJ1603207 and KJQN201803408).