Copyright © 2019 Ata Meshkinzar, et al. This is an open access article distributed under the Creative Commons Attribution License, which permits unrestricted use, distribution, and reproduction in any medium, provided the original work is properly cited.

We chose a PZT-5L piezoelectric tube (from Nanjing Hanzhou Technologie CO., LTD) the material properties of which are tabulated in Table 1 [25]. The density is 7600 kg/m3. The dimensions are 30 mm outside diameter, 26 mm inside diameter and 50 mm length.

To perform our simulations, ANSYS R15 Version 15.0.7 was employed together with an extension ‘PiezoAndMEMS’ to define piezoelectric material and its properties. The first step was to perform harmonic analysis on a tube with a uniform thickness. This was used as reference for comparison. We considered Simply Supported boundary condition. For exciting the piezoelectric shell, 36 V was applied to the electrodes of the transducer. The applied voltage can also be varied. The electrodes are too thin in comparison with the transducer dimensions; hence, they were not considered in our simulations.

Meshing quality considerably affects the precision of our results. Mesh skewness is the main mesh quality metric. It compares the element distortion with the ideal shape and reports a number within the range of 0 to 1. The limit is 0.95 and lower values represent better meshing (0.5-0.8 is a good mesh, 0.25-0.5 is considered a very good meshing and less than 0.25 is excellent [26]). To make sure meshing is done satisfactorily and results are reliable, mesh skewness is presented in Table 2.

Table 2. Mesh skewness for all specimens

As discussed earlier, it is intended to investigate feasibility of exciting mode shapes with different circumferential wave numbers such as two and three. To this aim, a uniform-thickness shell was investigated first within low ultrasound range of 25 kHz to around 60 kHz. The harmonic analysis results revealed that there occurs no mode shape with circumferential wave number of two or three within this frequency range. Therefore, we divided the shell circumference into equal thin-thick sections with internal and external steps as in Fig. 1. Harmonic analysis is performed on these designs and the results are presented in the following section. 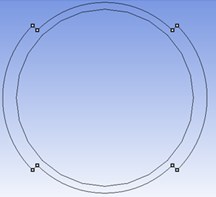 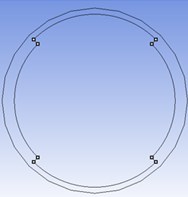 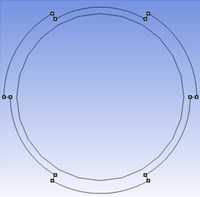 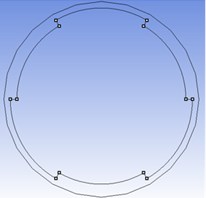 The maximum stress level at the red points in Fig. 2 corresponding to the maximum deformation is around 106 MPa, 64 MPa, 106 MPa and 123 MPa, respectively for specimens a to d in Fig. 2. The maximum tensile strength of a soft piezoelectric material as used in this study is around 47 MPa [27].

This means that although excitation of the intended mode shapes is feasible using stepped-thickness design, the maximum stress may exceed the material limit leading to the failure of the transducer in experimental tests. Therefore, alternatives might be sought. One alternative might be altering the thin region thickness. However, this may also alter the mode shapes and corresponding frequencies. The other alternative is to just reduce the excitation voltage as it does not change the mode shape, but it diminishes the vibration amplitude and accordingly reduces the maximum stress. To verify this, one simulation was performed for the specimen with two external circumferential steps at 18 V instead of initial 36 V. The maximum stress was reduced to 53 MPa from 106 MPa. This might be still high, however, it proves that depending on the material used and its stress limitations, the excitation voltage can be varied in such a way to keep the stress distribution within the safe range without altering the mode shape of vibration.

This work investigated the effectiveness of using stepped-thickness design for cylindrical piezoelectric shells to localize vibration amplitude and excite certain intended mode shapes of vibration. To this aim, FEA software, ANSYS was employed the reliability of which has been proven in the literature. Stress distribution as an important design consideration was also taken into account. The results revealed that using either internally or externally circumferential stepped-thickness design, it is possible to excite mode shapes with the same circumferential wave number as the number of steps. However, stress level may exceed the material limit. To tackle this issue, an alternative was proposed and validated by reducing the excitation voltage which does not affect the mode shape of vibration but reduces the vibration amplitude and accordingly stress level.