Copyright © 2019 Baoyuan Wang, et al. This is an open access article distributed under the Creative Commons Attribution License, which permits unrestricted use, distribution, and reproduction in any medium, provided the original work is properly cited.

The working characteristics of gun weapons are high temperature, high pressure, high speed and strong impact. When the gunpowder is ignited, it burns rapidly, and produces the high temperature and high pressure gunpowder gas, which drives the projectile to make intense acceleration movement in the bore until it flies away from the muzzle at high speed. Because of the strong excitation of gunpowder gas to the gun, the movement and force of the gun are very complex. The gun launching not only makes the gun produce strong translation, but also strong rotation, and accompanied by strong impact between various parts, the gun will produce very complex non-linear vibration. The whole working process of the gun is about ten milliseconds to several hundred milliseconds, which shows strong transient and randomness.

Gun is often deployed on the ground to shoot at enemy targets. The firing of gun will not only cause its own structural vibration, but also cause ground vibration. During the development of gun weapon, it is often necessary to test the vibration of gun structure. The test system is arranged on the ground to obtain the vibration response of gun structure relative to the ground. Then, what is the law of ground vibration caused by gun firing? What is the propagation law of ground vibration response of gun position? How much influence does it have on the gun vibration testing system? These problems have always been concerned by people in the process of gun weapon development. The so-called the ground of gun position is the ground around the gun.

Zhao Gang [1] carried out the research on the muzzle vibration test method of large caliber gun, using binocular vision test method based on the principle of high-speed camera, ignoring the influence of camera support stiffness, stability and ground vibration factors. Wang Hui [2] Aiming at the road spectrum acquisition test of gun during firing in travelling, a strapdown inertial navigation system (SINS) for road spectrum test was designed. In order to grasp the dynamic response law of self-propelled gun on typical soft ground, Liu Xinyun [3] carried out a simulation study on the dynamic response of self-propelled gun on soft-soil tire based on multi-body system dynamics software. Liu Chuan [4] analyzed the overall topological structure of a 122 mm vehicle-mounted howitzer. Considering the contact between tire and ground, a virtual prototype model of a 122mm vehicle-mounted howitzer was built by ADAMS software. Du Zhonghua [5] carried out force analysis and simulation of the whole gun, analyzed in detail the recoil and recovery motion of the whole gun, and considered the interaction among the hoe, tire and ground. Liu Xinyun [6] based on multi-body system dynamics and vehicle ground mechanics, a self-propelled gun firing modeling and dynamic response research was carried out with the aid of analysis software, and a virtual prototype model of the moving, firepower and road surface parts of the equipment was established. Wang Baoyuan [7] summarized the mechanics model research of gun structure interface, and analyzed the contact characteristics tracked self-propelled gun between the track and ground, vehicle-mounted gun between the spade, pedestal and ground. Wang Baoyuan [8] laid instrument brackets on the ground to test the firing stability of gun. None of the above literatures deals with the experimental study of ground vibration response in gun firing environment.

Fig. 1. Graphical distribution of the measurement points of the vibration acceleration on ground at gun position 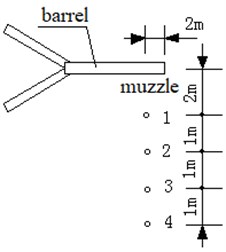 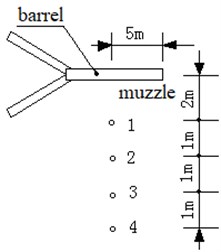 1) In-bore response time: the start time of the acceleration response in bore period of projectile;

The data in Table 1 are averaged and the results are shown in Table 2. In Fig. 2 to Fig. 4, the meanings of following symbols are:

1) : the acceleration of ground vibration in gun position, unit, g;

3) : the acceleration of ground vibration of the gun position in point No. 1, unit, g;

4) : the acceleration of ground vibration of the gun position in point No. 2, unit, g;

5) : the acceleration of ground vibration of the gun position in point No. 3, unit, g;

6) : the acceleration of ground vibration of the gun position in point No. 4, unit, g;

7) : the moment of projectile exits muzzle;

8) : the starting time of acceleration response in the bore of projectile; 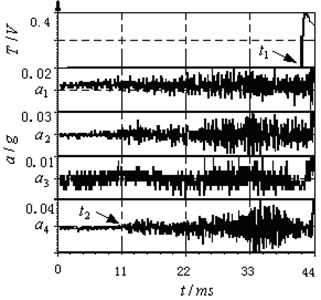 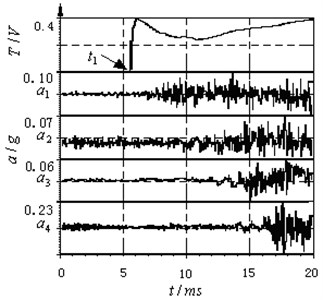 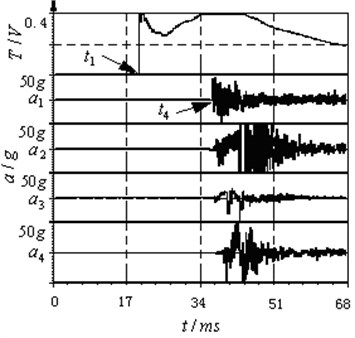