Copyright © 2019 O. A. Volokhovskaya. This is an open access article distributed under the Creative Commons Attribution License, which permits unrestricted use, distribution, and reproduction in any medium, provided the original work is properly cited.

The paper is dedicated to study the dependence of vibration activity at coasting of high-temperature segment of turbine unit (TU), which includes high pressure and medium-low pressure rotors (HPR-MLPR system) with skew-symmetric residual unbalance of each rotor, from frequently used types of bearings. Six-block segmental and elliptical bearings are considered. The study takes into account the presence of unrecoverable initial deflection of the shaft. Calculations are performed for turbine model K-300-23.5. Detailed analysis of results is performed.

The double-span shaft HPR-MLPR system’s vibration activity determined primarily by the type of bearings and the rotors residual unbalance magnitude, as well as by the unbalance caused by unrecoverable shaft deflection. Such shaft line deflection occurs due to rotors temperature instability and/or by non-compliance with the TU start conditions [1]. Bearings, in which the double-span shaft HPR-MLPR system is installed, also influence on its vibration activity.

It is known that during TU rotation operating speed the oscillation amplitudes of system HPR-MLPR shaft must satisfy the standards of the International Standard Organization (ISO): shaft oscillations amplitudes (OA) in bearings installation points must be: OA ≤ 90 µm. In addition, OA in the middle of the spans should not exceed the gaps in the seals. Bearings type influences on the execution of both these limitations. During TU coasting at natural frequencies, corresponded to the oscillation forms with nodes close to the middle of the spans, the transient vibrations of the shaft with maximum OA are excited in bearing installation points.

In case of an unfavorable mutual arrangement of the rotors’ residual unbalances and unbalances from unrecoverable deflection, these oscillations can lead to the violation of the OA ≤ 90 µm condition, leading to bearing damage and the need for an emergency stop of the TU for their repair or replacement. Related problems discussed in [2-5].

The mechanical model of HPR-MLPR system of TU consists of two weightless shafts having bending stiffness and bearing the concentrated masses ( 1, ..., 9). The double-span shaft system of HPR-MLPR is mounted on three bearings. Coordinate axes , coincide with the main axes of stiffness of the most loaded middle bearing ( – axis of minimum stiffness, – axis of maximum stiffness). The design scheme of the two-span shaft system of HPR-MLPR is shown in Fig. 1. In that figure , are the parameters of stiffness and damping of the bearings (1, 2, 3 – bearing number, from left to right; 11 – for the values of the parameters in the direction of the axis , 22 – in the direction of the axis ).

It is assumed, that the HPR shaft during operation acquires an unrecoverable deflection due to the temperature instability or non-compliance with the conditions of TU start-up [1]. Herewith the axis of its deflection and the axis of the resulting deflection of the entire shaft line are flat curves lying in the or planes.

The initial form of the axis for removed from the left shafting support HPR-MLPR system is shown in Fig. 2 (curve ). The value can be called “curve shape parameter” of the initial deflection of HPR shaft. 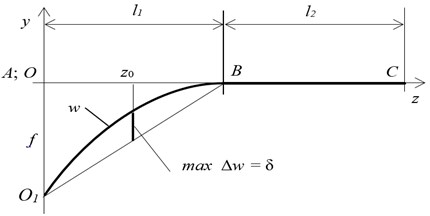 The shape of the actual deflection of the shaft line cannot be predicted in advance. It depends on many different factors. From many possible forms of the HPR shaft unrecoverable deflection for further calculations, as in [1], is adopted the following: 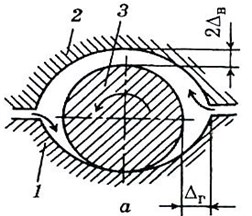 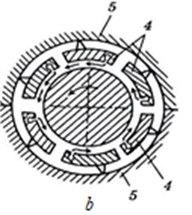 The values of the parameters (stiffness and damping coefficients) for the bearings of the compared types for the HPR-MLPR system are presented in Table 1.

Table 1. The values of the parameters for the bearings

3. Analysis of the forced oscillations amplitudes of HPR-MLPR system at coasting of TU

Fig. 4. Curves of an avoidable deflection of HPR-MLPR system shaft line and options for the arrangement of unbalances

The natural frequencies and corresponding normalized oscillation forms for HPR-MLPR system with bearings parameters from Table 1 were calculated in [1].

The normalized forms of oscillations corresponding to these frequencies are shown in Fig. 5. In the presence of skew-symmetric unbalances of both rotors forced oscillations in these forms can be excited during coasting of the TU and have oscillations amplitudes of bearings exceeding ISO standards. This can lead to the failure of the bearings and to emergency TU stop.

Fig. 5. Eigen forms of shaft oscillations, what are dangerous for the bearings: 1 – for elliptical bearings; 2 – for segmental bearings

The calculation of transient oscillations amplitudes of HPR–MLPR system shaft line in areas near the natural frequencies in skew-symmetric unbalance carried out according to the method proposed in [6]:

The reduced damping coefficient [6] expresses by the relation:

The parameter in Eq. (2) reflects the impact of unbalances, acquired at the expense of unrecoverable deflection (Fig. 4), and residual mass unbalance with eccentricities (1,..., 9):

where – eigen forms of oscillations of the system with the corresponding type of bearings; – values of the unrecoverable deflection along the axes and (Fig. 4) at the masses attachment points on the shaft line (1,..., 9).

In paper [1] it is shown that the main contribution to the parameter value gives the parameter. It depends on the residual unbalance distribution along the length of the shaft line of the system and the type of the corresponding oscillations form. From Eq. (4) it follows, that the greatest value of is achieved if the components and have identical signs. Let in both cases of bearing type the residual unbalances vectors and the curves of the unrecoverable deflection lie in the same plane. At unrecoverable deflection of the HPR shaft, given by the Eq. (1), the maximum value of the parameter is achieved in the case of variant of skew-symmetric unbalance (see Fig. 4). In Fig. 4 the location of unbalances for the most vibro-active symmetric point imbalance at these frequencies (variant AB) is also shown [1]. Due to the lack of standards on the value of the maximum permissible moment of inertial forces, we proceed as follows. Let us assume that the unbalances (for the first span of the shaft line) and (for the second) with skew-symmetric unbalance of variant are equal to their maximum permissible values with symmetric point unbalance [1]. Then for unbalances (indexes 2, 4, 6, 8 correspond to the mass numbers on the shaft line) we obtain:

where – the module of the reduced residual unbalances [6], , – masses of HPR and MLPR, respectively.

The excitation parameter for the most vibroaction skew-symmetric unbalance of variant at frequencies given by Eq. (2), is described by the relation:

where – the main forms of vibration at frequencies and . 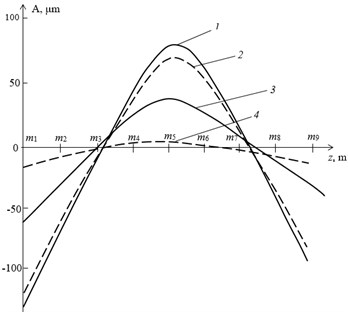 On the basis of the proposed model of HPR-MLPR system shaft line (of turbine K-300-23.5 type) the amplitudes of the transient oscillations are estimated in the control points at coasting TU. The case with the most dangerous type of skew-symmetric unbalance (variant C) from the point of view of vibration activity of the TU shaft line is considered. This unbalance may be due to a residual unbalance of the shaft components and/or induced by a permanent deflection caused by the temperature instability of the rotors and/or non-compliance with the conditions of TU starting.

The influence of the most common types of bearings (elliptical and segmental) on the vibration activity of a two-span rotor with a skew-symmetric residual imbalance is considered and analyzed. The amplitudes in the control points of the system at frequencies lower than the frequency corresponding to the operating speed of TU are compared.

On base the proposed mechanical model of the HPR-MLPR system shaft line with the selected design parameters, it is shown that the use of elliptical bearings is safer, in terms of ISO standards, and therefore the most appropriate.