Copyright © 2019 R. Manikantan, et al. This is an open access article distributed under the Creative Commons Attribution License, which permits unrestricted use, distribution, and reproduction in any medium, provided the original work is properly cited.

In this work, we propose an optimization-based approach for reconstructing unknown inputs in non-linear systems. The proposed methodology assumes that only some of the system states are available through sensor measurement for input reconstruction, and an accurate mathematical model of the physical system is known. The unknown input must be found such that some objective function in its state and input is minimized. The optimization problem is posed via parameterization of the unknown inputs using basis functions. Therefore, the input reconstruction problem is posed as a parameter identification problem. However, the choice of parametrization leads to a large number of parameters that need to be identified for reconstructing the input. When deterministic approaches like the steepest descent, Gauss-Newton, etc. are used, convergence to a local minima is very common. On the other hand, stochastic algorithms like genetic algorithms, simulated annealing, etc. can be used for global convergence but these approaches increase the computation cost [12]. In this study, we address this problem by using the ideas of homotopy transformation [13]. The homotopy transformation involves adding convex terms with a known optimum to the objective function with a morphing parameter l. The transformed objective function can then be minimized using any deterministic approach to arrive at a global minimum [12], while slowly varying from 1 to 0 as the optimization proceeds. This approach is hereafter referred to as the homotopy optimization method.

This paper is organized as follows. In Section 2, the procedure for homotopy optimization is introduced. The proposed methodology for unknown input identification is discussed in Section 3. Section 4 presents the analysis of the homotopy transformation. In Section 5, numerical examples are presented to illustrate the developed method. Finally, the contribution of this work is summarized in Section 6.

Consider a function such that attains the global minimum at = . We need to find the optimal point . Let be a convex function with a known global minimum. The homotopy transformation is constructed as , where is the morphing parameter that continuously deforms to as it is varied from 1 to 0. Let the solution of at a given be . Starting with = 1, the solution of the optimization problem is known. Then the value of is decreased by a small amount and the function is minimized using as an initial guess. The procedure is continued with small decrements in until = 0. At = 0, and the original optimization problem is recovered.

Let us assume that the experimental system is governed by the following non-linear ordinary differential equations:

where, is the reconstructed input vector. For reconstruction, the unknown input is parametrized as , where, represents the number of terms in the series expansion of , are the basis functions, and are the parameters to be identified. Now, the unknown input can be written in vector form as:

The objective function given in Eq. (8) is usually multi-modal with respect to . Depending on the initial guess, the optimizer can converge to a local minimum. To avoid this problem, the following homotopy transformation is introduced in Eqs. (6-7) [12]:

where, . With the introduction of the homotopy term in Eqs. (9-10), the objective function becomes a function of as follows:

where, is replaced with .

In order to understand the influence of homotopy transformation on the objective function, we study the dynamics of the error terms. Subtracting Eq. (9) from Eq. (12) and pre-multiplying both sides with , the error dynamics can be obtained as follows:

where, = . The solution of the singularly perturbed system Eq. (15) on a slow time scale ( = ) behaves as follows:

where, = . Next, we get by substituting Eq. (16) in Eq. (11), which represents a quadratic objective function in the parameter error . If the gain matrix is selected in such a way that synchronization holds then the optimum of the objective function is well defined [14].

In this section, several numerical examples are presented to demonstrate the proposed method of unknown input identification. The minimization of (Eq. (11)) is performed using the fminsearch function of MATLAB. The differential equations are solved using ode15s: a variable step continuous-time solver.

where indicates the position of the spline. The B-spline curve is defined a .

In order to demonstrate the accuracy of the proposed method, consider the following pendulum system:

where = 14, and = 0.4. Experimental data is generated for = 20 s by numerically integrating Eq. (19). Now, given , the objective is to identify the unknown input . By following the procedure mentioned above, we assume a parameterization of the unknown input in the mathematical model (Eqs. (6-7)) of the form = . The B-spline basis is obtained from Eqs. (17-18). The unknown parameter-vector is obtained by minimizing Eq. (11). For this example, we consider two input signals = , where is the step function and = .

Fig. 1 shows results for the input signal = . The B-spline parameters considered for this case are = 5 and = 0, and the homotopy gain parameter = 500. It can clearly be seen from Fig. 1(a) that the identified input is nearly identical to the actual input . Fig. 1(b) shows the comparison between experimental displacement and displacement obtained by integrating the mathematical model with the identified input . From Fig. 1(b) it is clear that matches very closely with the experimental data . 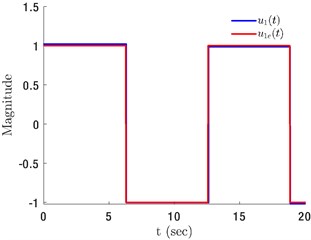 Fig. 2 shows results for the input signal . The B-spline parameters considered for this case are 6 and = 0, and the homotopy gain parameter = 150. It can clearly be seen from Fig. 2(a) that the identified input is nearly identical to the actual input . Fig. 2(b) shows the comparison between experimental displacement and displacement obtained by integrating the mathematical model with the identified input . From Fig. 2(b) it is clear that matches very closely with the experimental data .

In this work, the input reconstruction problem for non-linear dynamical systems is studied. Through input vector parameterization, the unknown input identification problem is reformulated as a parameter identification problem, which is then solved using the ideas of Homotopy transformation. Homotopy transformation is considered so that the global optimum is achieved. A theoretical analysis of the homotopy transformation is presented in this work, in which it is shown that as long as the high-gain observer synchronizes the experimental and model response, the global optimum of the objective function can be identified. Finally, the accuracy of the proposed methodology is demonstrated via a numerical example in which it is shown that by using the proposed methodology one can effectively reconstruct the unknown inputs.

The authors gratefully acknowledge the Department of Science and Technology for funding this research through the Inspire Fellowship (DST/INSPIRE/04/2014/000972).