Defect elimination in torsional harmonic reducer based on harmonic resonance

Copyright © 2019 Dishan Huang, et al. This is an open access article distributed under the Creative Commons Attribution License, which permits unrestricted use, distribution, and reproduction in any medium, provided the original work is properly cited.

Fig. 2. Partial enlarged drawing of a load on the fifth axis joint 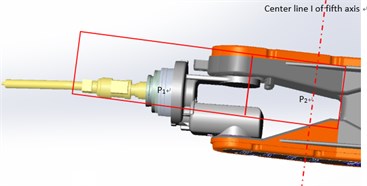 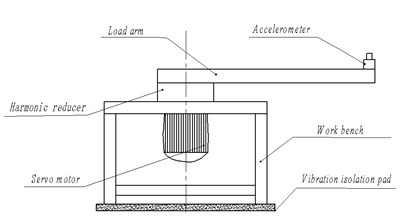 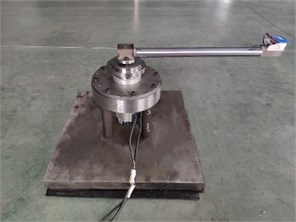 The physical picture of the torsional vibration test device of harmonic reducer is shown in Fig. 4. The test sample is a SHG-20-80 harmonic reducer with transmission ratio 80. Referring to the working condition of industrial robot, the rotation speed of the motor is set from 300 rpm to 3000 rpm at an interval of 100 rpm, and the time history of torsional vibration corresponding to each speed is recorded. 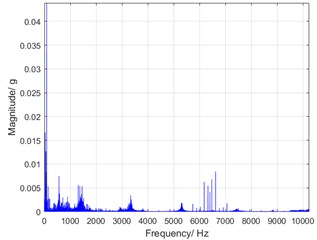 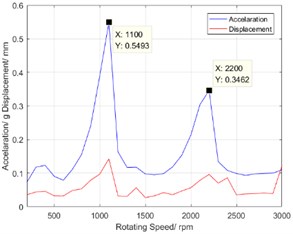 Since the characteristic frequency of the rigid gear is very similar to that of the flexible pinion, the spectral feature will be bi-spectrum. At the rotation speed of 1100 rpm, the frequency difference is 0.5 Hz, which produces a significant beat, as shown in Fig. 7(a). The vibration phenomenon of beat is caused by the inherent structure of teeth difference between the flexible pinion and the rigid gear.

To clearly observe the phenomenon of bi-spectrum, the first and second order frequency components are zoomed on the frequency coordinates. Then, a double peak can be seen in the zoom spectrum as shown in Figs. 8(a) and (b). In the bi-spectrum, the left peak is caused by the cumulative error of the rigid gear tooth and the cam profile error, and the right peak is caused by the accumulation error of the flexible pinion tooth or the eccentricity in driving shaft. Base on this property, defect diagnosing can be carried out for harmonic driver. 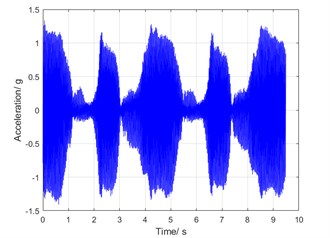 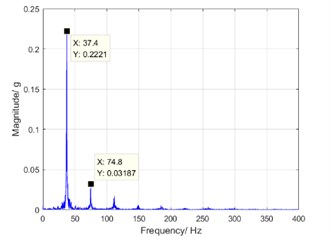 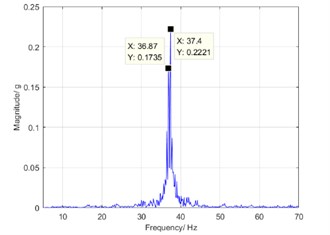 a) The first order frequency component 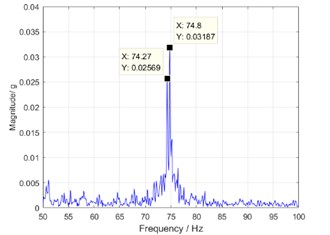 b) The second order frequency component

As shown in Fig. 6, the vibration magnitude of the harmonic reducer is abnormal when the input shaft speed is at 1100 rpm and 2200 rpm. Meanwhile, observe that the right peak is higher than the left one in the first order zoom spectrum as shown in Fig. 7. Therefore, the dominant vibration may be caused by the eccentricity of driving components or the corresponding assembly problems based on the characteristic frequencies in Table 1.

In the study, the misalignment in the drive shaft is reduced by improving the design of the assembly structure. The torsional vibration spectrums before and after adjusting process are shown in Fig. 9. At the rotation speed of 1100 rpm, the peak of the dominant component is reduced by about 30 % after the adjustment. It means that the peak of harmonic resonance is reduced and defect elimination is successfully realized.

Fig. 9. Torsional spectrum before and after adjustment at the rotation speed of 1100 rpm 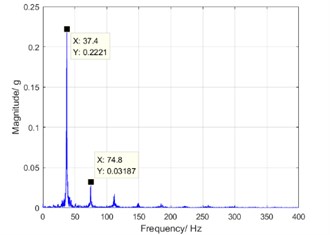 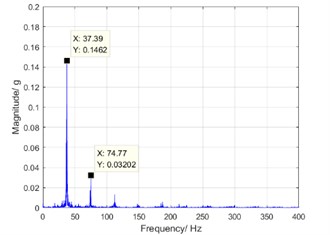 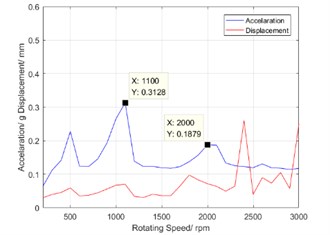 Due to the cumulative error of the rigid gear and the flexible pinion in the gear manufacturing process, the torsional stiffness changes periodically with the transmission angle in the harmonic reducer. Therefore, the parameter torsional vibration will occur when the harmonic driver runs. Parametric vibration is a kind of nonlinear phenomenon. In the practice, typical parametric vibration characteristics, such as harmonic resonance and quasi-period, are found in the vibration spectrum and the phase space. 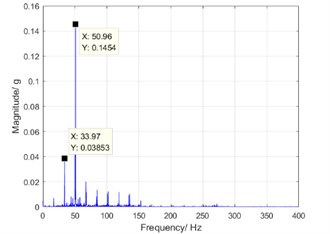 a) Six-order harmonic resonance at the speed of 500 rpm 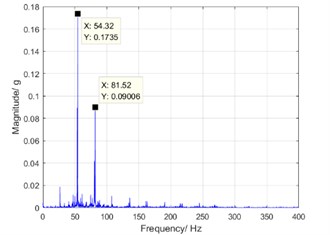 b) Fourth-order harmonic resonance at the speed of 800 rpm

Fig. 12 is two trajectories in phase diagrams corresponding to 500 rpm, 800 rpm, respectively. The phase diagram of the parametric vibration is of a quasi-periodic motion characteristic. 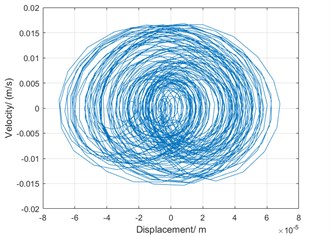 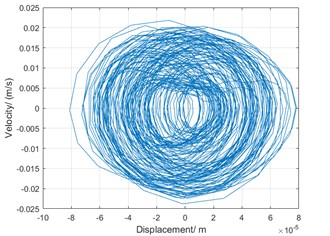 The torsional vibration test is carried out on a harmonic reducer in industrial robot with asymmetrical inertia. Some advantages are summarized as follows:

1) The curve of torsional characteristic is easily measured, and it can be used to assess the mechanical dynamic performance of a harmonic driver.

2) If abnormal case occurs in the curve of torsional characteristic, using zoom spectrum technology on harmonic resonance, bi-spectrum will be analyzed in detail and the characteristic frequency will be identified with higher resolution. The manufacturing defect can be diagnosed, and it can be effectively eliminated through adjustment process for components of the harmonic driver. The given technology can be used in on-line quality assurance for product of harmonic driver.

3) If torsional stiffness with time periodic dependent occurs in the harmonic driver, some nonlinear phenomenon, such as bi-spectrum, harmonic resonance in the spectrum and property of quasi-periodic in phase space, can be observed from the measured result.