Study on blast-induced vibrations of a tunnel cross section

Copyright © 2019 Xu Jiangbo, et al. This is an open access article distributed under the Creative Commons Attribution License, which permits unrestricted use, distribution, and reproduction in any medium, provided the original work is properly cited.

Construction blasting in a tunnel in deep-buried soft rock will undoubtedly influence the cross section of the tunnel. Taking the deep-buried soft rock tunnel as the research background, a field monitoring experiment of the tunnel blast-induced vibrations is carried out. The cross section was established using 5 monitoring points to collect the peak particle velocity (PPV) data and frequency spectrum data. The results show that the maximum horizontal radial component of the blast-induced vibration velocity is greater than the maximum vertical component in the deep soft rock tunnel, and the maximum vertical component is greater than the horizontal tangential component. Due to the presence of an inclined shaft, the high domain frequencies have an amplification effect on the tunnel, while low frequencies do not exhibit significant amplification effects.

In recent years, with the gradual advance of infrastructure construction, tunnel construction has extended from plain areas to mountainous areas. In the process of tunnel excavation, drilling and blasting is the most widely used technique. The dynamic load of the tunnel excavation inevitably influences the surrounding rock.

Some research results on tunnel blast-induced vibrations have been obtained both at home and abroad. Xie et al. (2013) used a dynamic finite element method to establish a three-dimensional model and obtained the dynamic response of an existing tunnel that is above the new tunnel under different spacings, different lengths and different loads [1]. Li et al. (2008) carried out a series of studies on tunnel blasting construction and provided a reference for similar projects [2-4]. Fu et al (2011) studied the blast-induced vibration rules of the arch crown and upper and side surrounding rocks behind the tunnel face and provided three empirical formulas [5]. Shin et al. (2011) identified the effect of blast-induced vibrations on adjacent tunnels and proposed a preliminary guideline for evaluating the protection zone for the blast vibrations that is based on a parametric study of the blast location, tunnel depth, and amount of explosives [6]. Yu et al. (2014) monitored blast-induced vibrations in a tunnel, and established a 3D numerical model using ABAQUS to develop safety criteria [7]. Lamis et al. (2014) compared finite element model results with in situ measurements and made some recommendations [8]. Nateghi et al. (2011) analysed the influence of blasting in different rock formations using different detonation methods [9]. Lee et al. (2016) used UDEC to model the tunnel blasting procedure and investigated the attenuation of the wave propagation induced by the tunnel blasting [10]. Kim et al. (2015) adopted experimental and numerical methods to assess the controlling effect of abrasive water jet cutting on blast-induced ground vibrations during tunnel excavation. The results show that the abrasive water jet cutting method reduced the blast-induced ground vibrations and was more effective than the conventional drilling and blasting method in tunnel excavation [11].

Majiashan tunnel is located on the left bank of the river in the northwest side of Hadapu town. The mileage of the centre of the tunnel is DK243+414, and the monitoring ranges from DK239+696 to DK247+132, 7436 m long. The maximum depth of the tunnel is 494 m, and the minimum depth is 42 m. The entrance and exit of the tunnel are located in the bedrock weathering layer, and the natural slope of the tunnel outlet is approximately 40°-60°. The tunnel passes through a stratum that is mainly carbonaceous phyllite with a valley and a slope, and its crest is covered with a quaternary Holocene slope area of sandy loess, diluvial macadam soil, and alluvial gravel soil on the slope surface of the inclined shaft import. The lithology of tunnel face is phyllite and flaggy structure, and is characterized by developed joints and fissures, fractured rock formations and very poor stability (Fig. 1). 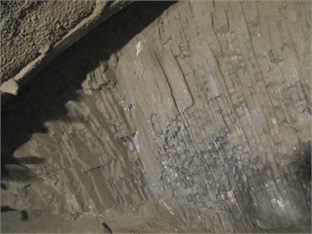 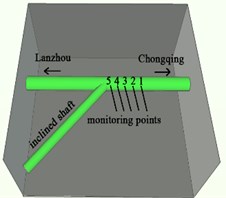 Based on the measured data, the linear correlation between the blast-induced vibration velocity and the core distance is established. Using the least squares method, the parameters used in the regression analysis are shown in Table 1.

Zhang et al. (2008) [13] studied the vibration characteristics and variation of the partition wall and the blasting face of the small-pitch tunnel. Lai et al. (2016) [14] studied the characteristics and diffusion law of vibration response of subway tunnel structures. Xu et al. (2017) [15] used wireless network systems to monitor the effects of train-induced vibration on slope stability. Combining these research results, the monitoring data were analysed and compared, and several groups with better correlation are shown in Table 2 and Figs. 3-6.

From Figs. 3-6, we can see that in the tunnel blasting test, there are 3 direction components for the blast-induced vibration velocity. The maximum horizontal radial component is greater than the maximum vertical component, and the maximum vertical component is greater than the maximum horizontal tangential component. The radial and tangential velocities have a direct impact on the surrounding rock and the initial support, so the horizontal radial velocity can be used as the safety evaluation index of the tunnel blast-induced vibration. In addition, the blast-induced vibration velocity of the No. 5 monitoring point is greater than that of all the other monitoring points in the 3 direction components. Some reports in the literature also present this phenomenon. Lai et al. (2015) [16] studied the effects of vibrations caused by explosions on existing tunnel structures. As the No. 5 measuring point position is along an inclined shaft, the first direct wave encounters the inclined shaft and produces reflection, which leads to the reflected wave and the subsequent arrival of the seismic wave to form a superposition, resulting in an amplification effect at the No. 5 monitoring point. 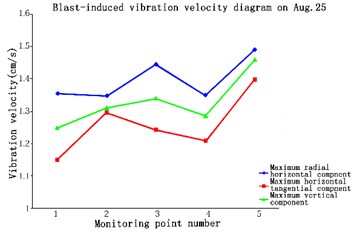 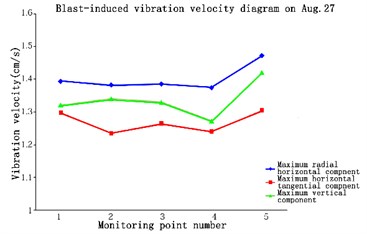 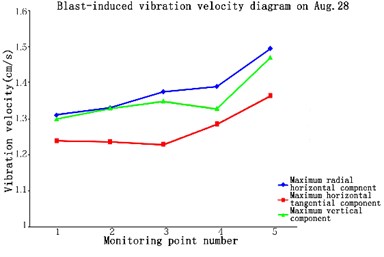 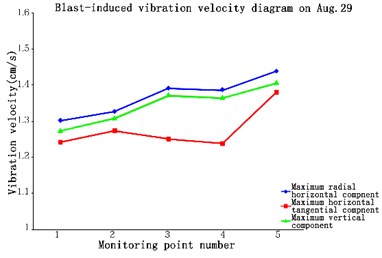 Referring to the literature of Zhang et al. (2008) [17], the power spectrum analysis extracts the frequency domain characteristics of the signal according to the energy of the different frequencies, determining the frequency in response to the main energy of the vibration signal to scientifically carry out the design, determine the amount of the section, select an appropriate blasting method and calculate the safety distance from the blast-induced vibration.

Through the analysis and comparison of these spectra, we can obtain a regular pattern:

1. There are 2 distinct sub bands in the blast-induced vibrations that are mainly concentrated in 50-100 Hz and 150 Hz. They occupy 80 % of the total energy. 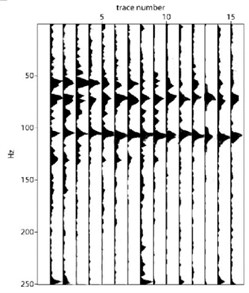 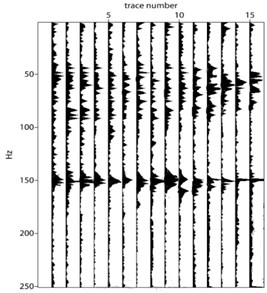 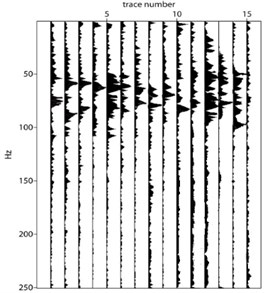 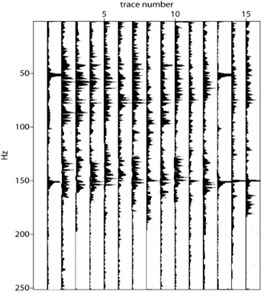 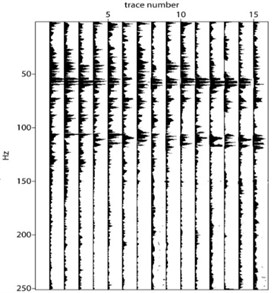 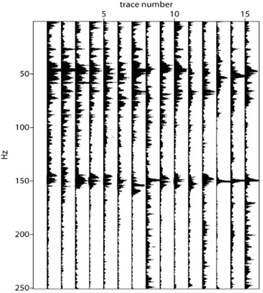 3. There are 2 distinct sub bands in the blast-induced vibrations, which are mainly concentrated in 50-100 Hz and 150 Hz. These occupy 80 % of the total energy.