Copyright © 2019 Yingpeng Yang, et al. This is an open access article distributed under the Creative Commons Attribution License, which permits unrestricted use, distribution, and reproduction in any medium, provided the original work is properly cited.

In 1973, Kaimal study of such ultrasonic anemometer and wind shadow effects found by the instrument sensor and affect the ratio of the diameter of the receiving distance (/) of the transmitting end [5, 6]. John C. Wyngaard advocated that the wind meter array design prefers to reduce the measurement error. By carefully aerodynamic design, not only the size of the sensor can be reduced but also the influence of the wake on the signal path can be reduced. However, this method cannot eliminate the shadow effect of the transducer completely [7]. John C. Wyngaard and Zhang proposed an empirical model to correct for the transducer shadow effect in which two constants must be determined from the best fit of the model with experimental data [8, 9]. Ghaemi-Nasab M. fits the compensation function for the path wind speed through a large number of tested data [10]. While in the actual ultrasonic wind speed measurement, the wind speed compensation on the path cannot solve the error of the actual wind speed direction [11]. To figure out the errors in the measurement of actual wind speed and direction, the dual paper path model was adopted to deduct the wind direction compensation arithmetic.

Assuming that the angle between the wind speed and the -axis is , the wind direction is: 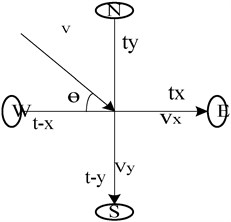 Data fitting is the most effective way to reduce the shadow effect by fitting a large amount of measured data to a specific ultrasonic wind meter model and fitting a curve close to the actual value [12].

Ghaemi-Nasab M. proposed a fitting scheme of and in the /= 20 orthogonal path wind model (Eq. (7)). In which the measurement bias of is derived from the deviation of the projection angle of on the path:

Below is Ghaemi-Nasab M. according to the Eq. (7) by using the experimental data fitting the Ф third-order function in the form of expression:

In the single-path experiment, as shown in Fig. 3, we cannot derive the values of and from . In an commercial used two-dimensional wind gauge system, data on two paths is required to obtain complete wind speed information.

The path is deduced from Eq. (9) as follows:

3.1. The fitting relation between the angle measurement data and the angle compensation method of wind and ultrasonic path

The relationship between the actual angle and the measured angle in the case of measuring nine wind speeds is shown in Fig. 4. The wind angles measured under different wind speeds at the same wind speed angle are basically coincident. The sum of squared residuals is 0.0049, this two fit well.

3.2. The difference between the angle measurement and the actual value after the algorithm compensation 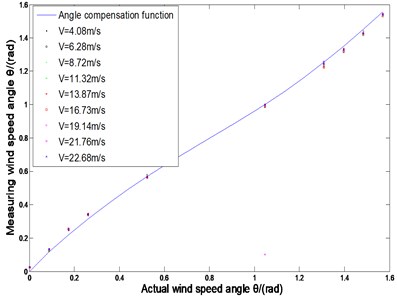 Fig. 5. Comparison before and after measuring wind angle compensation 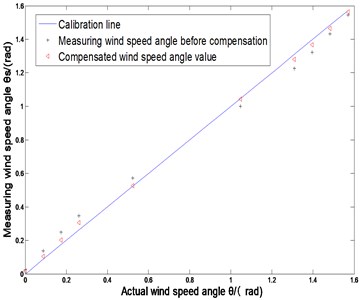 3.3. Error changes before and after wind speed compensation

In Fig. 6, comparing the values of the wind speed U before and after compensation, the error caused by the shadow effect is significantly reduced. Among them, the measurement error of wind speed is 14.65 %, and the error after algorithm compensation is 1.74 %.

The squared sum of the residual wind velocity U and the actual value before compensation is 34.4620. While after the compensation, the value is 0.0943.

Fig. 6. Comparison before and after measurement of wind speed compensation 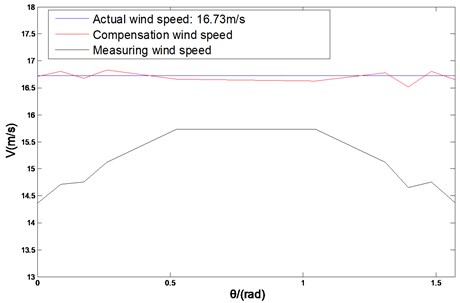 It is found that the sum of the squares of the residuals of the data after the algorithm compensation is reduced obviously. It indicates that the compensation value is well fitted to the actual measured value.

In experiment, found shadowing effect caused by specific measurement error is very obvious by fitting the data, the deviation of the wind speed even reached to 14.65 %.

We do specific data compensation for the specific model of the ultrasonic wind gauge to improve measurement accuracy. Also, we establish a good ultrasonic anemometer model experiment and the path selection algorithm for calculating the compensation is lower complexity. The verification fitting degree angle correction function thus obtained, the accuracy of the wind speed calculated direction as well.

The fitting effect is fine, and the wind speed error is reduced to 1.74 %. The algorithm reduces the error caused by the shadow effect and improves the accuracy of the ultrasonic wind measurement, which has practical value.