Copyright © 2019 Zhipeng Li, et al. This is an open access article distributed under the Creative Commons Attribution License, which permits unrestricted use, distribution, and reproduction in any medium, provided the original work is properly cited.

The detonation of electric detonators in modern intelligent fuse, the reception and processing of fuse signals, the control of ignition and the increase in the number and types of sensors make the power demand of the fuse circuits to be higher and higher, therefore the problem of insufficient power supply, and less available power source have become one of the difficulties in research of modern intelligent fuse. The airflow acoustic piezoelectric generator can use the air against the projectile during the flight and convert the environmental energy during the flight into a pulsating sinusoidal vibration excitation [1, 2], and then output power through the transducing mechanism. Thus, the airflow acoustic piezoelectric generator is one of the new fuse power sources that can effectively solve the problem of insufficient power supply for fuse. Therefore, it is of great significance to study the relationship between acoustic vibration response and power generation characteristics of the airflow acoustic piezoelectric generator and the output of the maximum energy.

Chen Hejuan and Li Yingping referred to the jet generator in the US military manual, studied and improved its theory. Being the first to propose the airflow acoustic piezoelectric generator [3], Chen Hejuan, Zhu Xiaoguang, Zou Huajie et al. pioneered the development of small vibration piezoelectric generator principle prototype [4, 5], Wang Gensheng discovered the frequency characteristics of the air acoustic piezoelectric generator through experiments, and provided guidance for the circuit design [6]. However, he did not further study the sound pressure amplitude and voltage amplitude of the generator; Wang Junlei et al. studied the influence of external load on the energy conversion of vortex-induced vibration in a three-phase coupled cylinder, used the matrix method to analyze the system damping and the natural frequency of the vibration energy, and obtained the steady-state equation [7], of the system voltage output mainly through software simulation, however there was no experiment to verify the accuracy of the theoretical. Zou Huajie proposed experimental analysis and estimation method for the vibration frequency problem of the existing airflow acoustic piezoelectric generator [8, 9], without studying the effect of acoustic vibration response on the transduction. By studying the acoustic vibration response of the fluid sound source, this article has achieved the transducer process from fluid-acoustic wave-vibration-power under the action of force, displacement and acceleration of vibration source of the pickup transducer system, and successfully tracked the exciting force, piezoelectric vibrator and the changes of amplitude, frequency and phase of the open circuit voltage during the coupling process. At last, the correctness of the theory was verified by experiments, which provided a new research idea for studying the phenomenon of airflow acoustic.

Airflow acoustic vibration piezoelectric generator is a fluid oscillation controlled by the acoustic standing wave modal of the cavity. The expression of acoustic pressure in the cavity [5] is:

where 𝑝𝑚 is the amplitude of the acoustic pressure. 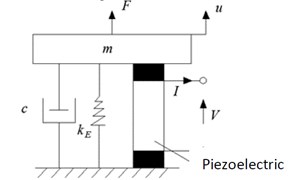 where is the amplitude of the displacement, 𝜑 is the phase angle, , when the maximum value is obtained, which is the maximum, at this time.

In the open circuit state, the current is zero, so there will be:

where is the static clamping capacitance, is the piezoelectric stress factor.

Second: Increase the flow rate to increase the amplitude of the excitation force value .

The impedance test of the air acoustic vibration piezoelectric generator was carried out, result has shown that the anti-resonance frequency of piezoelectric oscillator is 6.37 kHz. The testing curve is shown in Fig. 3. 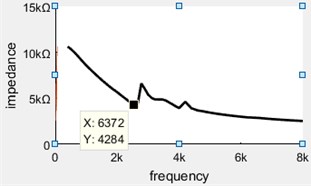 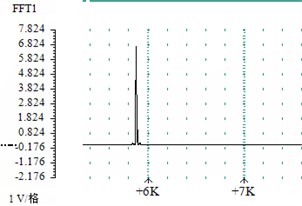 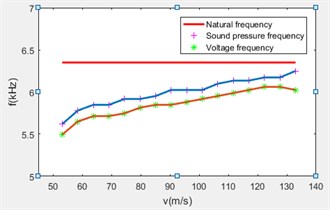 From the obtained curve in Fig. 7, it can be seen that the pick-to-pick value of the open circuit voltage is positively correlated with the peak-to-peak value of the acoustic pressure. 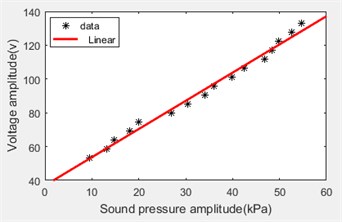 1) When designing the gas acoustic pezioelectric generator, only when the acoustical modal frequency in the resonant cavity is consistent with the frequency of the flow induced acoustic wave, the regular vibration signal can be generated.