Copyright © 2019 Can Gong, et al. This is an open access article distributed under the Creative Commons Attribution License, which permits unrestricted use, distribution, and reproduction in any medium, provided the original work is properly cited.

The hybrid finite element method and statistical energy method was used to study the vibro-acoustic coupling characteristics of an engineering vehicle cab. The parameters of the statistical energy method, such as modal densities, damping loss factors and coupling loss factors of substructures, were acquired by numerical and analytical methods. The acoustic-structure coupling of the cab was established based on the modal densities of substructures. The vibration and noise excitations of the cab were measured by test and the sound pressure level response of the driver’s ear was predicted. It was shown that the prediction results based on the hybrid method are in agreement with the experiments and the proposed method can be applied to predict the mid-frequency response of complex vibro-acoustic coupling systems with a moderate computational cost and accuracy.

At present, the dynamic response of the structure-acoustic problem can be predicted by the deterministic or statistical methods. Deterministic methods, such as boundary element method (BEM) [1, 2] and finite element method (FEM) [3, 4], are usually applied to low-frequency range due to the prohibitive calculational cost. Statistical methods, such as statistical energy analysis (SEA) [5-8], applied to dynamic analysis from the energy point of view are limited to the high frequencies as a result of the lack of accuracy. In some cases, however, there is a mid-frequency range, in which neither deterministic methods nor statistical methods can be used here with accuracy and validity.

For the “mid-frequency problem”, the hybrid FEM-SEA had been recently proposed [9-13], which combine advantages of the two well established methods. Shorter [14] investigated the prediction of the transmission loss of a front-of-dash component based on the hybrid method and the results obtained by simulation was in good agreement with the test. Prasanth S. [15] built the hybrid model of structure-borne noise in a fully trimmed vehicle from 200 Hz to 1000 Hz. It was shown that the hybrid model could accurately predict absolute panel vibration and cavity SPL. Azevedo [16] modeled the floor structure of an aircraft using the hybrid method to predict the response of the vibration and the results was experimentally validated. Cordioli [17] investigated the transmission loss of various slits based on the hybrid FE-SEA method, and analyzed the parameters of influencing the transmission loss of the typical slits and seals.

The purpose of the present contribution was to predict the structure-acoustic response of an engineering machinery cab firstly based on the hybrid FE-SEA method in the mid-frequency range. Firstly, the theories behind the hybrid model and the governing equations of the hybrid method were presented, and then, the parameters of the hybrid model were calculated by analytical methods. Finally, the response of the cab is conducted by comparing with experiment and some conclusions are discussed.

2.1. Theory of the hybrid FE-SEA method

In hybrid model, the FE part is represented by a set of degrees of freedom , and the SEA subsystems by their average vibrational energy level [10-12]. The relation is written in terms of the cross-spectral matrix of force :

where denotes the ensemble average, is the “direct field” dynamic stiffness matrix, is the angular frequency and is the modal density of the SEA subsystem. The response of the FE dofs is given in cross-spectral form by:

The average energy response of the SEA subsystems, written as:

where, power input can be computed by the displacement response arising from external load applied to the subsystem and its dynamic stiffness matrix . is the coupling loss factor.

2.2. Parameters of the hybrid model

For ideal subsystems, the modal densities of which can be given by Eq. (5) and Eq. (6):

DLF is a measure of the rate of energy flowing out of a subsystem through a dissipation mechanism, which is defined as follows:

where, structural loss factor () caused by internal friction of the th subsystem is the inherent properties of materials. According to the structure loss factor-material table, of tempered glass is 0.001 and of steel plates range from 0.0001 to 0.0006. The loss factor of acoustic radiation () can be acquired from the Eqn. (8) and Eqn. (9):

The interior acoustic cavity regarded as semi-free sound field is written as:

The coupling loss factors (CLFS) are created simultaneously when the appropriate wave fields are connected. As to the point connected subsystems, the CLFs can be acquired by the Eq. (11):

The CLFs for the line junction subsystems can be defined as:

where represents the length of coupling line, is the bending wave velocity of subsystem, represents the surface area, and is the wave transmission coefficient from subsystem to .

For the area coupling structure, the CLFs can be defined as follows:

Fig. 1. a) Structural-acoustic system of engineering machinery cab, b) modes per 1/3rd octave band for the principal structural subsystems 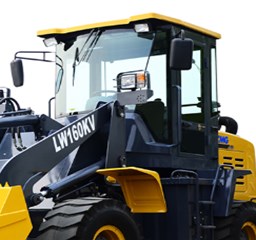 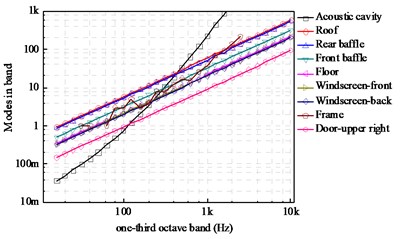 3. Modeling of the engineering machinery cab

3.1. Description of the structural-acoustic system

In this paper, we are interested in studying the acoustic response of an engineering machinery cab at passengers’ ears under engine’s structure-borne and air-borne excitations in middle frequency range. The cab is made of two shield panels, two windscreen panels, four door glass panels and two top and bottom panels, plotted in Fig. 1(a). The frame is of rectangular shape and made of connected steel beams with different cross sections. The cavity encloses a volume of 2.63 m3 and the total surface area is 13.48 m2.

3.2. Modeling of the cab based on the hybrid model

In this study, most of subsystems in the cab are simplified into regularly ideal flat plates, singly-curved shells etc. The modal densities of subsystems are estimated based on analytical methods above shown in the Fig. 1(b). According to the mid-frequency domain division principle [9], the hybrid model can be used from 100 Hz to 800 Hz. 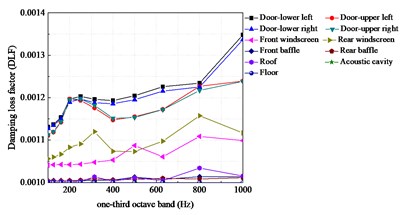 Fig. 3. CLFs between the front windscreen and the acoustic cavity 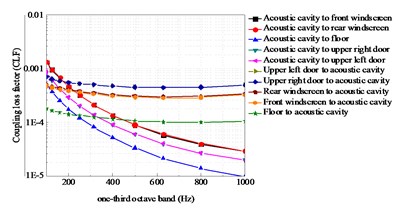 3.3. Excitations of the hybrid cab model

Then excitation forces can be figured out by imposing integral transform on acceleration signals. The forces were defined as follows:

where and represent the acceleration at mounting system of the cab and the vehicle body, represents the stiffness of the mount. The vibration and sound radiation excitations of the cab respectively was plotted in Fig. 4 and Fig. 5. 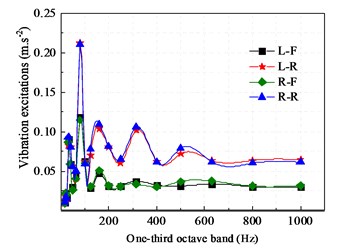 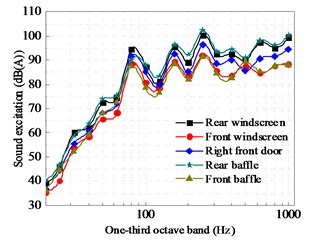 The results by averaging the sound responses through experiment in the engineering machinery cab is compared with that of the hybrid FE-SEA method plotted in Fig. 6. It is shown that in general the predicted results are in good agreement with the test results. The frequencies at the peaks and variation trend in the response are basically consistent from 100 Hz to 800 Hz. Some discrepancies were also observed at lower frequencies due to low modal density shown in Fig. 3 which does not meet the application assumptions of SEA in this band. Moreover, another possible reason could be the assumption of hard-wall boundary conditions, whereas the actual cab has tiny holes and gaps because of doors, windows and pipelines.

Fig. 6. Comparisons (SPLs) between the predicted and test results 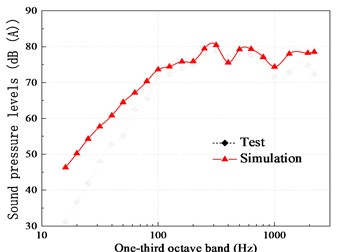 In this paper, studies of interior sound pressure response of the engineering machinery cab were made using the FE-SEA method. In the hybrid model the frame structure was described by finite element method while the panels such as windows, doors and windscreens were modeled based on the statistic energy method. Then parameters of the SEA, such as modal densities, DLFs and CLFs of substructures, were acquired by analytical methods. Finally, comparisons were used to validate the hybrid model and verify its accuracy through experimental results. It is shown that the hybrid FE-SEA method is an alternative for improve traditional deterministic or statistic models for structure-acoustic predictions in the mid-frequency range with a moderate computational cost and accuracy. It is worth noting that the hybrid method can only obtains the results averaging at frequencies and not get results at single frequencies. What’s more, it’s accuracy is closely to the application of frequency range.