Copyright © 2019 Yumeng Fan, et al. This is an open access article distributed under the Creative Commons Attribution License, which permits unrestricted use, distribution, and reproduction in any medium, provided the original work is properly cited.

The eddy current brake has the advantages of no frictional contact or hydraulic fluid, high structural reliability, etc. The existing linear eddy current brakes are mostly flat type. A cylindrical permanent magnet eddy current brake is proposed in this paper, whose air gap magnetic field is generated by a series of ring-shaped permanent magnets and guided by iron pole to conductor layers, and can achieve higher air gap magnetic flux density. This paper introduces its basic structure and working principle. In order to obtain the analytical model of magnetic circuit design, the equivalent magnetic circuit method is used to analyze and derive the magnetic circuit, and it is verified by the axisymmetric finite element model. To derive the braking force generated by the eddy current brake, the layer theory approach is applied. The influence of electromagnetic parameters on the force characteristic is obtained by finite element numerical calculation, which provides a theoretical basis for the optimal design of the eddy current brake.

Compared with the traditional brake, the eddy current brake has the advantages of simple working principle, high structural reliability and no friction [1]. It makes the eddy current brake being widely applied, such as high-speed train track braking system and electromagnetic aircraft ejection system braking [2-4]. In order to solve the problem of short-distance braking of a large impulse machinery, a new type of eddy current brake is designed.

For the braking force calculation of the eddy current brake, Romanian scholar Boldea et al. equivalent the primary excitation winding to an infinitely thin current layer, and then derived Expression [9] according to the layer theory. There are also many other different derivation methods for the braking force models of different structures of eddy current buffers [10, 11].

Most of the existing linear eddy current brakes are flat-plate structures or hybrid excitation circuits. This paper designs and analyzes a brake model with a cylindrical structure using only permanent magnet. It has the following advantages over other types of eddy current brakes. First of all, the structure is simple, the installation is convenient, and it is not easy to suffer loss and error. Secondly, a large braking force can be generated, which makes it possible to brake a high-speed moving object in a short time and a short distance.

In order to carry out in-depth research, analytical mode were carried out for magnetic circuit design analysis, and finite element simulation and model analysis were also carried out for eddy current and braking force.

Fig. 1(a) illustrates the partial three-dimensional structural schematic of the studied cylindrical linear EMB, which mainly consists of two parts: the primary part, which consists of a moving rod combined with a sequence of ring-shaped, axially magnetized permanent magnets separated by pure iron poles, and the secondary part, which consists of an outer tube and an inner tube. High-velocity relative movement between the primary and secondary parts will occur under the intensive impact load. Due to the electromagnetic induction, circumferential eddy currents are generated in the secondary. They are sequentially arranged along the iron pole interval, and is opposite to the adjacent eddy currents. At the same time, the circumferential eddy currents induce a new magnetic field interacting with the primary magnetic flux to generate braking force, which hinders the relative motion of the primary and secondary according to Lenz’s law.

Fig. 1(b) exhibits the layout of the permanent magnets which are oriented with magnetic poles of the same polarity facing each other. The iron pole is located between the two permanent magnets to increase the amount of magnetic flux entering the secondary. Therefore, the decrease of the quiescent operation point caused by the flux leakage in the cylinder hole of permanent magnet and excessive air-gap reluctance is reduced. The thick bold arrows show the direction of field line. 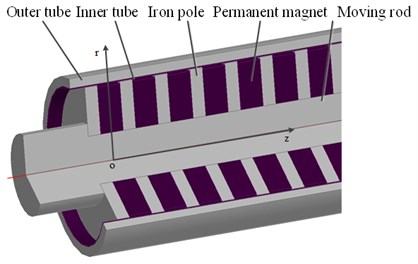 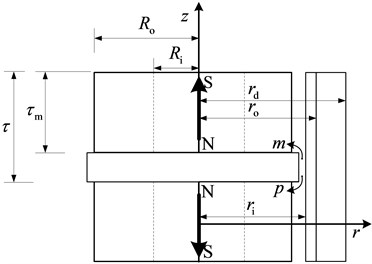 The no-load state of the eddy current brake refers to a state in which the relative velocity of the primary and secondary is zero, that is, the eddy current in the conductor plate is zero. Analyze under no-load condition can rapidly provide verify whether the performance and size are compatible with the envisioned application without involving comprehensive eddy current formulation. Fig. 2(a) shows the magnetic circuit distribution and magnetic flux flow direction of the eddy current brake in the no-load state. This paper did not neglect the leakage flux, adding it into the equivalent magnetic circuit, which improve the accuracy of the analytical model.

The calculation formula for each part of the magnetic circuit is as follows.

The magnetomotive force generated by the permanent magnet is:

where is the permanent magnet coercivity.

where: is the external radius of the iron pole.

Fig. 2. a) Magnetic path and flux flow direction and b) its equivalent magnetic circuit 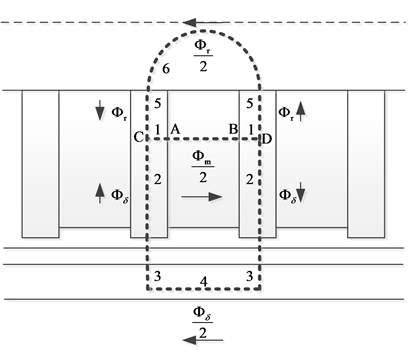 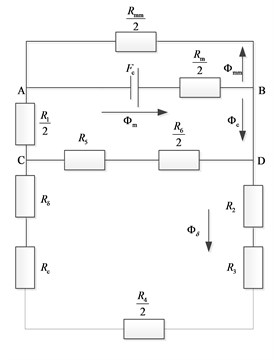 where: is the relative magnetic permeability of the permanent magnet.

The magnetic permeance of the 6 part of the magnetic circuit can be expressed as:

Fig. 3. The magnetic circuit of the 6 part 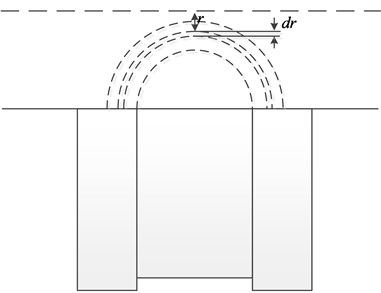 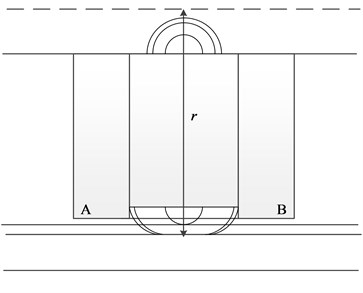 Therefore, the expression of the leakage flux in the hole of the permanent magnet is:

The outer leakage flux is divided into two parts: the part through conductor and part only in the air gap:

According to the equivalent magnetic circuit of the electromagnetic buffer and the Kirchhoff magnetic potential difference law, we can get:

By solving the above equations, we get:

Therefore, the gap magnetic density at the air gap place r under no-load condition is:

The design parameters of the eddy current brake are shown in Table 1.

In this chapter, the layer method approach is used to derive the braking force of the inner tube conductor layer. The permanent magnet is equivalent to an infinitely thin current layer so that the magnetic motive force generated by the current layer is equal to the magnetic motive force generated by the actual winding and the permanent magnet. According to the electromagnetic field theory, the corresponding differential equations and their general solutions in different regions can be obtained. 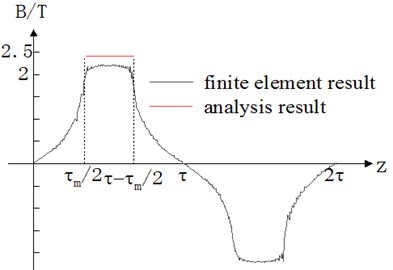 For the air gap region, because the electrical conductivity of the air gap is zero, so the equation is as follows. And the region of the outer tube is similar to it:

For the inner tube conductor layer, the eddy current is induced in the layer when the brake is working. And the differential equation in the inner tube layer can be derived:

where is the conductivity (S/m) of the inner cylinder, and is the relative velocity between the primary and secondary.

where is the polar logarithm; is the conjugate complex number of .

Using a set of design data as Table 1 to establish the finite element model, the magnetic flux density of the device at the speed of 5, 10 and 1 5m/s are as Fig. 6. It is observed that the reaction field of eddy currents tilts the field line coming into the secondary and differs in degree at different speed. 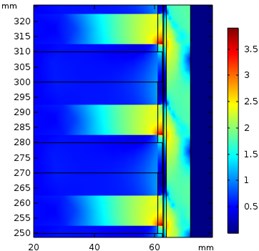 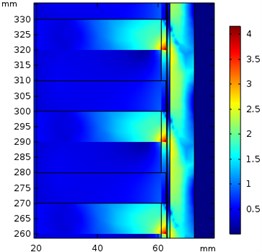 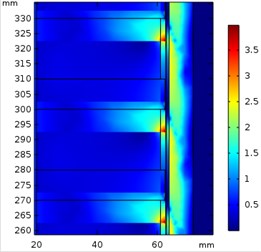 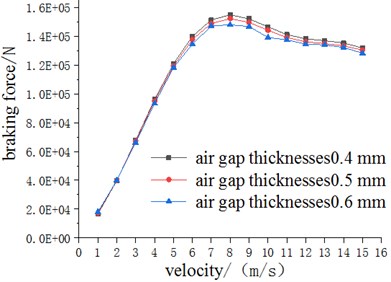 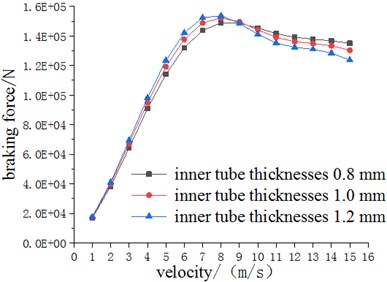 In this paper, a new type of cylindrical permanent magnet eddy current brake is proposed, and its basic structure and working principle are introduced. In order to obtain the analytical model of the magnetic circuit, the equivalent circuit method and layer theory approach are used to analyze and derive the magnetic circuit. The model is also calculated by the axisymmetric finite element model, and the analytical model is verified through comparing. The influence of the thickness of the air gap and the thickness of the inner tube on the braking force characteristic curve is obtained using the finite element model, which provides a theoretical basis for the future optimal design of this eddy current brake.

There are still errors of the analytical model proposed this paper with practical device, demagnetization effect of permanent magnet and armature reaction would be added into consideration in future study.