Copyright © 2019 Zhenxuan Yu, et al. This is an open access article distributed under the Creative Commons Attribution License, which permits unrestricted use, distribution, and reproduction in any medium, provided the original work is properly cited.

Prestress concrete channel beam bridge is a new structure suitable for highway bridges, railway bridges and urban rail transit. Compare with the conventional t-beam bridge and box girder bridge, the channel beam can significantly reduce the height of the superstructure, increase the clearance under the bridge, reduce the height of the embankment, block the traffic noise and prevent the overturning of vehicles. It also has the characteristics of beautiful shape, convenient maintenance and good anti-seismic performance [1]. Due to its advantages under stress, construction and economy, channel beam has been widely used and developed rapidly in engineering construction.

However, the concrete track bed plate of channel beam bridge has the characteristics of large transverse width and weight, the stress of inclined wall box girder, complicated construction process, difficult control of concrete crack, and high construction technical difficulty [5]. Especially in the combination of box girder and girder bed plate, the composite effect of bending, shear and torsion is obvious, and the combination of bed plate and girder web is easy to crack. Therefore, it is necessary to study the wide channel beam bridge.

Due to the 48 m channel beam bridge is first to build for double track railway, it is important to evaluate the safety performance of the bridge. In this paper, the safety analysis of the support structure is carried out based on the finite element model, and the conclusion can provide reference for similar engineering applications.

The channel beam bridge has the top width of 15.3 m, and the bottom width of 13.2 m. Standard section beam height 3.15 m. The minimum thickness of track bed plate is 70 cm, and the fulcrum is thickened to 130 cm. The side girder adopts inclined wall-type box section. The roof of box girder section is 1.95 m wide and 55 cm thick. Web thickness 32-45 cm. The longitudinal, transverse and vertical prestressing forces are set in the whole bridge, among which the longitudinal and transverse prestressing forces are made of low-relaxation steel strand with tensile strength of 1860 MPa, with a total of 35 beams in the whole bridge. The vertical prestress adopts PSB830 finished rolled steel bar with diameter of 25 mm, 240 in total. The bridge is cast-in-place construction by bracket, the cross sectional drawing is shown in Fig. 1. 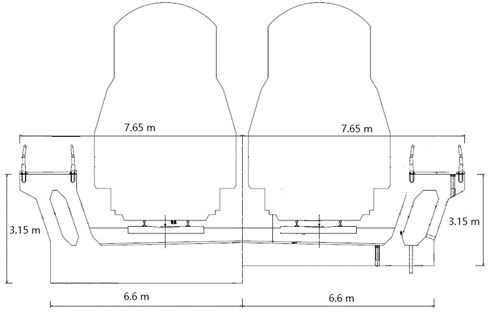 The support system of channel beam is composed of column, transverse distribution beam, longitudinal beam, square wood, and bamboo rubber plate bottom mould system, etc., as shown in Fig. 2. Beam support using 6 row of five columns, a total of 30 posts and 508 × 8 mm steel pipe with maximum length 10 m, which welding on caps and bar based on the embedded parts, respectively. The cross-bridge spacing is 2.0+2×3.15+2.0 m, and the consequent-bridge spacing is 8.205+3×9.0+8.205 m. The spiral pipe is decorated with two beams. Bailey beams are arranged on the beam with spacing of 120+5×45+5×120+5×45+120 cm. I14 distribution beams with a spacing of 75 cm were arranged on the Bailey beam, and 100×100 mm square wood was placed on the beam. Solid parts under the web were spaced 0.25 m, hollow parts 0.3 m, and groove bottom plates 0.45 m. The bottom mold is 18 mm bamboo rubber plate for the face.

According to the actual stress condition of the support, its load value is as follows:

(1) Weight of the structure consists of the weight of steel tube, Bailey beam, I-beam and other structures, which can be directly calculated according to the bulk weight of the material in Midas Civil.

(2) Wet weight load of the main beam: the density of reinforced concrete is 26 kN/m3, according to the actual concrete pouring height on the formwork, and the load distribution of wet weight of concrete is calculated as shown in Fig. 3. 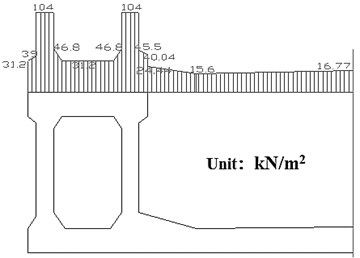 (3) Main beam formwork and support load is calculated according to uniformly distributed load, which is 2 kN /m2.

Table 1 gives the mechanical properties parameters of the materials required for calculation.

Table 1. Physical and mechanical properties of the materials

Fig. 8 shows the overall deformation diagram of the structure. The maximum vertical deformation is 8.14 mm downward, which occurs near the middle position of the side span. The maximum down warping value is less than the deformation limit /400 = 8205/400 = 20.5 mm, which meets the requirements of stiffness.

The calculated reaction force results of support system are shown in Fig. 9. The maximum support reaction force is 986.7 kN, which occurs on the second row of the outermost column.

Fig. 8. Deformation of the overall structure

The maximum bending moment, the maximum combined stress, the maximum shear stress, and the overall deformation of the overall structure are calculated based on finite element model, and all of above are meet the requirement of safe, and the supporting structure can be considered to be safety. The relevant structural safety design can provide reference for similar projects.