Copyright © 2019 Q. Y. Wei, et al. This is an open access article distributed under the Creative Commons Attribution License, which permits unrestricted use, distribution, and reproduction in any medium, provided the original work is properly cited. 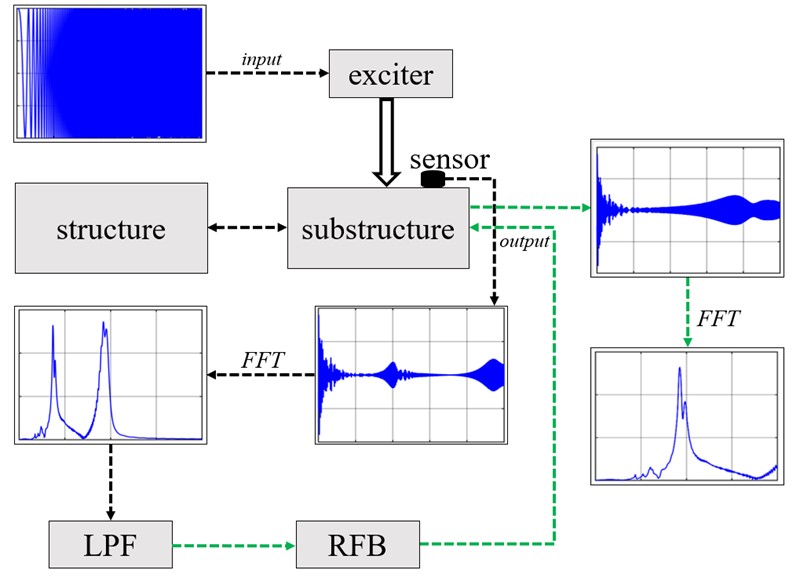 In the long-term service of the sluice, cracks occur inevitably in hoist beams arising from the load and the aging of the material. The expansion and collection of cracks cut down the normal working performance of hoist beams and destroy the safety of the sluice structural system [1, 2]. Traditionally, the detection of sluice hoist beams cracks relies on artificial visual inspection method, but this method is subjective and inaccurate [3, 4]. Damage detection method based on the change of natural frequency is a new method for detecting cracks of sluice hoist beams [5, 6]. This method is effective when the damage extent is large, but exhibits insensitivity about local damage in minor damage extent [7]. Since sluice structural system is complex and large in scale, the local damage of the hoist beams has a limited influence on global structural frequency of the sluice [8].

In this paper, the proposed resonance frequency band (RFB) excitation is combined to maximize the local mode. The change ratio of LPF is utilized to detect damage of sluice hoist beams. The validity of this method is verified by numerical experiments. Damage identification of a hoist beam under different number and degree of cracks is carried out.

2. Damage detection method based on LPF driven by RFB

Assume an degree of freedom system with substructures, Hou et al. indicated the sensitivity of th order natural frequency about the damage of substructure can be expressed as [9]:

where is the ratio of and , and are the lower and upper limits of the RFB.

According to the theory of structural dynamics, the amplification factor of displacement response with respect to the excitation frequency is:

where is the damping ratio, generally determined based on experience or field testing.

The finite element model of a sluice is established as shown in Fig. 1. The model composed by 38,131 nodes and 36,548 elements is divided into four parts: foundation, bottom plate, gate pier and hoist beam. 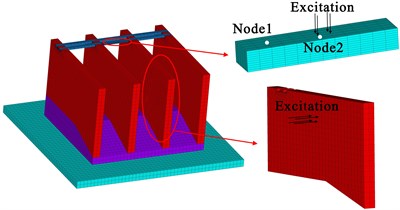 Sweep frequency excitation (SFE) is applied to the gate pier and the hoist beam, respectively. The acceleration responses of node 1 and node 2 are extracted to perform FFT, the results are shown in Fig. 2. 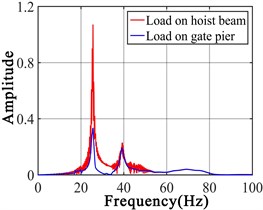 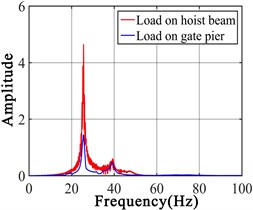 Two peaks exist on the spectrogram when the excitation is applied to gate pier, but LPF is hard to be chosen. However, the LPF located near 25 Hz can be clearly identified when the excitation is applied to the hoist beam. The LPF obtained by node 2 is significantly larger than the LPF obtained by node 1. Since node 2 is located at the middle of the hoist beam but node 1 is located at the side of the hoist beam, the vibration displacement of the node 2 is larger than the vibration displacement of the node 1. During the process of damage detection, excitation can be directly applied to the substructure we focused, and sensors can be placed in position where the vibration displacement is large, so the LPF can be obtained more easily. 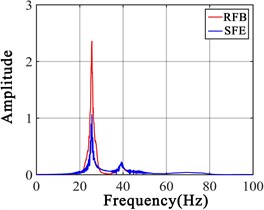 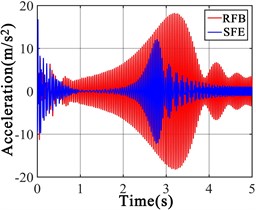 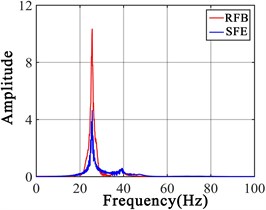 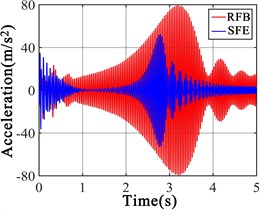 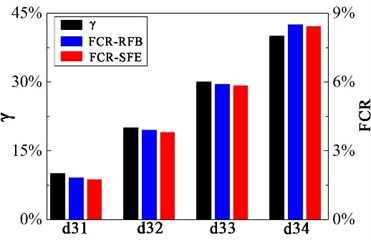 When three cracks exist in the hoist beam, both excitations have satisfactory damage identification effects. The damage extent of the three cracks is large, the change ratio of the LPF is easy to be obtained, so the advantage of the RFB is not obvious.

The SFE cannot play a role in small damage situations when two cracks exist in the hoist beam. As the extent of damage increases, damage extent identified by the RFB is closer to the actual damage. 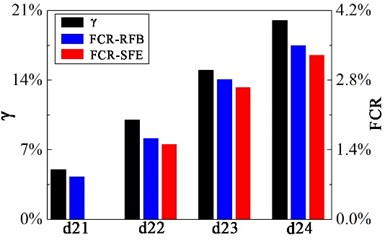 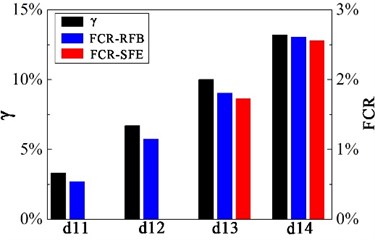 The above results show RFB has obvious advantages for discovering the minor damage of hoist beam, and the identification effect is good under different damage extents.

This paper presents a method for detecting damage in sluice hoist beams. Numerical simulation is carried out to verify that the change of the LPF can effectively identify the damage extent of the sluice hoist beam forced by the RFB, conclusions can be obtained as follows:

2) The RFB excitation increases the sensitivity of the LPF about the substructure damage, and amplifies the influence of local minor damage on frequency.

3) Damage extent of the hoist beam is evaluated by the change ratio of LPF. The damage identification is effective under different cracks number and depth. This method can provide a basis for the preliminary detection of the sluice hoist beam damage in actual engineering.

This work is supported by the Chinese (Jiangsu)-Czech Bilateral Co-funding R&D Project DELTA “Advanced system for monitoring, diagnosis and assessment of large-scale concrete infrastructures” (No. SBZ2018000220), and the National Natural Science Foundation of China (Nos. 11772115 and 51708173).