Copyright © 2019 Vanliem Nguyen, et al. This is an open access article distributed under the Creative Commons Attribution License, which permits unrestricted use, distribution, and reproduction in any medium, provided the original work is properly cited.

To improve the soil compactor ride comfort, a combined control method of Fuzzy and PID control is proposed to control the cab isolation system of soil compactor based on the non-linear vehicle dynamic model. The vibration excitation sources are concerned by the vibrator drum and elastoplastic soil (EPS) interactions in the compression process. The power-spectral-density (PSD) and weighted root-mean-square (RMS) of acceleration responses of both the vertical driver’s seat and pitching cab angle are chosen as the objective functions. The research results show that both the PSD and weighted RMS values of the vertical driver’s seat and pitching cab angle are significantly reduced by using the PID-Fuzzy control under various EPSs in the low-frequency region, especially on the EPS with high-density.

The soil compactor performance was evaluated not only by the compression efficiency of the vibratory drum on the soil, asphalt and other materials but also by the driver’s ride comfort [1, 2]. Therefore, in order to achieve the maximum excitation force of the vibrator drum, the drum-elastoplastic soil (EPS) interaction models were studied and analyzed [3, 4], the research results showed that the compression performance of the soil compactor was maximum at the excitation frequency region from 15-40 Hz of the vibratory drum [5], especially at a low frequency 28.5 Hz and high frequency 33 Hz of the vibratory drum [1, 3]. However, these vibration excitations transmitted to the driver via the cab isolation system were very high, so the driver’s feel was very uncomfortable. To solve this issue, to improve the cab isolation system was one of the most important problems.

The cab isolation system of the soil compactor equipped with the rubber mounts was analyzed and evaluated on the driver’s ride comfort [1]. The design parameters were then optimized to improve the ride comfort [6]. However, the weighted RMS values of the driver and cab were high under various working conditions, especially the cab shaking. Three cab isolation systems including rubber, hydraulic, and pneumatic mounts to increase the ride comfort were proposed [2]. The research results showed that the driver’s rider comfort and the cab shaking were significantly reduced by the cab isolation system used the hydraulic mounts in the low-frequency region. However, the vibrations of the vertical driver’s seat and cab pitch angle are still great in the moving condition of the vehicle according to the ISO 3615-1 [7]. Therefore, to reduce the vibration of the driver’s seat and cab, the cab hydraulic mount should be controlled.

The hydraulic mounts applied for engine isolation mount [8] were controlled to decrease the engine vibrations [9]. Besides, some construction vehicles cab using the hydraulic mounts [10, 11] were optimized and controlled to improve the ride comfort. However, the researches only concerned under the vibration excitations of the rigid road surface roughness. Nowadays, the combined control methods such as PID-Fuzzy [12, 13], Hinf-Fuzzy, or Skyhook-NFLC control [14, 15]were applied to control the damping forces for the semi-active suspension system or active suspension system of vehicles and seat. The results showed that the ride comfort was significantly increased by using the above control methods. Therefore, this paper, based the combined control method of the PID-Fuzzy, the cab isolation system equipped with the hydraulic mounts is controlled via the non-linear dynamic model of the soil compactor to improve the ride comfort. The performance of the cab hydraulic mounts with the PID-Fuzzy control is then evaluated via the power-special-density (PSD) and weighted root-mean-square (RMS) of acceleration responses of both the vertical driver’s seat and pitching cab angle under the various compression conditions of the drum-EPS interactions and in the low-frequency region of the soil compactor.

Based on the actual structure of the soil compactor, a nonlinear dynamic model of a single drum vibratory roller with 7DOF is built to evaluate the control performance of the PID-Fuzzy control for cab isolation system equipped with the hydraulic mount (HM) [2, 6, 11], as plotted in Fig. 1. 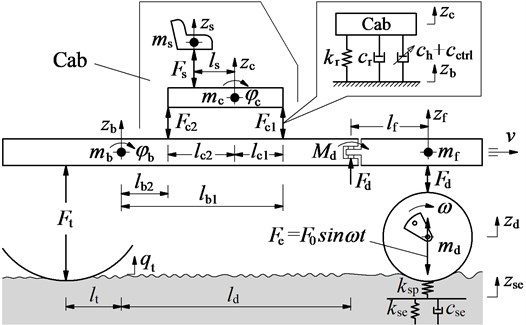 The motion equations of the soil compaction dynamic model are given by:

The equation of the dynamic forces of cab hydraulic mounts is determined by [2]:

To improve the driver’s ride comfort, the damping values of the HM is then controlled based on PID-Fuzzy control.

The equations of the excitation forces of the drum () and the wheel () are also determined as follows:

where , and , are the stiffness and damping values of drum’s rubber mount and wheel.

2.2. Vibration excitations of the soil compactor

In order to determine the vertical excitation forces from the road surface on the soil compactor, two types of excitations are chosen to simulate including:

According to the Gaussian random process, the terrain surface roughness could be calculated through the Fourier transformation as follow:

where is space frequency; is reference space-frequency; is the surface roughness coefficient; is the frequency index of the terrain surface; is the number of intervals; is a random phase uniformly distributed from 0 to 2π. According to tho the Mitschke’s research results [19, 21], a poor terrain surface of off-road terrain with = 2.14, = 3782.5×10-6 m3/cyc was used to determine the vibration excitation of the terrain on the wheel. The spectral density of the poor terrain surface in a low-frequency below 10 Hz is plotted in Fig. 2.

By combining Eqs. 4 and 7, we can determine the vibration excitation of the drum.

Fig. 2. The spectral density of a poor terrain surface 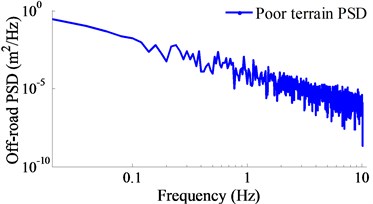 The proportional integral derivate (PID) control is one the controller not only simple structure but also robust performance. The PID’s transfer function is written by:

where , and are the proportional, integral and derivative parameters, respectively. The PID’s performance depends on the PID’s parameters which are chosen. The well-known Ziegler-Nichols technique is used to determine the optimal values of PID, but it is efficiency only when the system works at the designed operating condition [12]. In order to solve this problem, the proportionality factors of PID is controlled by the Fuzzy control as follows:

where , and are the control parameters of the Fuzzy control in the variable ranges of the PID control of , and

By replacing Eq. 10 into Eq. 8, the PID’s transfer function is rewritten by:

In order to find the optimal proportionality factors of , and , the Fuzzy control is used to control the model.

The Fuzzy control consists of Fuzzification interface (FI), Fuzzy inference system (FIS) and Defuzzification interface (DI). First, the crisp values in FI are transformed into linguistic variables (LVs). The FIS is then used by fuzzy rule in accordance with inference rule. Finally, the LVs are transformed back to crisp values through DI for use by the physical plant [13, 20]. This paper, the relative displacement and its velocity in Eq. 3 are considered as two input variables and they are denoted by and , while the parameters of , and are the output values, and the FLC-PID control model is shown in Fig. 3.

The if-then rules are then applied to describe according to expertise experiences and the designer’s knowledge. The fuzzy rules are listed in Table 1 and written as follows:

The FIS is selected by the minimum function and the centroid method of Mamdani [20]. This paper, we used the FIS of Mamdani for control system model.

Table 2. The numerical values of the EPS

In compaction condition of the soil compactor, under the excitation force of the drum on the EPS, the characteristics of the EPS was changed from the low to medium and high-densities [3]. The effect of the medium-density on the ride comfort was researched [1, 2, 12]. To evaluate the performance of PID-Fuzzy control, two types of the EPS with low and high-densities are chosen to simulate under the excitation drum 28 and 35 Hz at a speed 5 km·h-1. The numerical values of the EPS are listed in Table 2.

Fig. 4. Control results of PID-Fuzzy control on the EPS with low-density

Fig. 5. Control results of PID-Fuzzy control on the EPS with high-density

Table 3. Maximum PSD values of the driver and cab

Fig. 6. Weighted RMS results of PID-Fuzzy control on the EPS 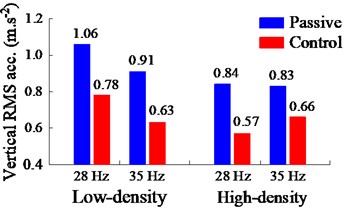 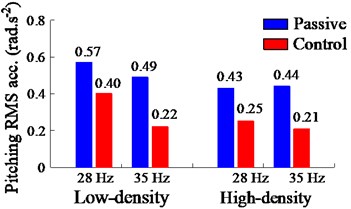 The ride comfort of the driver is remarkably improved by the PID-Fuzzy control under various compaction conditions of the soil compactor, especially under a low-frequency region below 4 Hz.

Both the maximum PSD and weighted RMS values of the pitching cab angle are strongly reduced with the control under different operation conditions and on the EPS with low and high-densities, especially on the EPS with high-density. Consequently, the PID-Fuzzy control not only improves the ride comfort of the soil compactor but also controls the cab shaking under various working conditions.

This study is supported by Hubei Polytechnic University Teaching and Research Projects (No. 19XJK17R).