Effect of public awareness, behaviours and treatment on infection-age-structured of mathematical model for HIV/AIDS dynamics

Copyright © 2020 Nurudeen Oluwasola Lasisi. This is an open access article distributed under the Creative Commons Attribution License, which permits unrestricted use, distribution, and reproduction in any medium, provided the original work is properly cited.

Since the discovering of the HIV/AIDS epidemic, more people have been infected with the HIV/AIDS infection and several individuals have died of HIV/AIDS virus. In this research work, an infection-age-structured mathematical model for HIV/AIDS transmission dynamics is developed and investigated, taking into consideration the public awareness, Treatment and Sex behaviours. It is assumed that the infectious population is structured according to time and age of infection. We established the criteria for the existence and uniqueness of solution. An explicit formula for the effective reproduction number of the model is obtained. We showed that the disease-free-equilibrium (DFE) state is stable if . Constructing a Lyaponov function, the global stability of the DFE state of the system is obtained for . Endemic Equilibrium (EE) state was analyzed locally and globally with the method of linear and nonlinear Lyapunov function; it was found that EE is locally asymptotically stable if and globally stable if for .

Human Immunodeficiency Virus (HIV) Infection is a virus that destroys the immune system in an individual’s system which natural defence against illness. There are two types of HIV, which are HIV 1 and HIV 2, HIV 1 is the more fatal and deadly which is the cause of the Acquired Immunodeficiency Syndrome (AIDS) pandemic while, HIV 2 is also known to cause AIDS [1]. Symptoms of the virus are diarrheal, fever, constant cough, and skin problems usual infections, severe illnesses [2]. The virus infection spread from person to person including having unguarded sex with an infected person, sharing of the followings, needles, syringes as well as other items for injection drug use with an infected person. Blood transfusion or organ and tissue transplant can also transmit the virus [1]. The Virus does not spread through the following, skin to skin contact, shaking of hands, as well as kissing, through Air and water, drinking items, saliva, tears sharing of a toilet, towels and mosquitoes or insects biting [3].

There are stages of HIV infection which are Acute HIV infection is the first few weeks after infection. The second stage is called clinical latency is after the first month, HIV enters the clinical latency stage [3]. The third stage, AIDS which we called acquired immunodeficiency syndrome. Without treatment, HIV advance to AIDS, at this point, the immune system is too weak to fight off life-threatening disease and infection [1]. Whereas, untreated life expectancy with AIDS is about three years. HIV/AIDS destroys cells called CD4 cell, these cells help immune system fight infections of individuals. More so, healthy adults have a CD4 count of 800 to 1,000 per cubic millimetres. If CD4 count falls below 200 per cubic millimetres, then it is likely to have progressed to AIDS [3]. AIDS weakens the immune system to the point where it can no longer fight off most diseases and infections. This makes individuals more vulnerable to a wide range of illnesses [3].

Meanwhile, more than 70 million individuals have been infected with the HIV virus and about 35 million individuals have died of HIV [1]. Therefore, Sub-Saharan Africa remains most severely affected, with nearly 1 in every 25 adults (4.2 %) living with HIV. Mathematical models have been used frequently to study both transmission and infectious dynamics of virus [4]. Meanwhile, there are numerous works on Transmission of HIV/AIDS Infection. In this research work, we considered infection-age-structured of mathematical model of HIV/AIDS dynamics incorporating public awareness, behaviours and treatment.

is generated by a recruitment rate of and the natural death rate for all compartments is . As a result of counselling and awareness, a proportion of the susceptible leave the class at the rate of which is the individuals abstained and remained faithful to uninfected sex partners and a fraction of is the rate at which individuals modify their sex behaviours. Also, is the rate of individuals knowing their HIV status. The expected reduction in unsafe sex behaviours by the class as a result of awareness is accounted for by . Thus, is the force of infection from to , where and is the incidence rate of unaware susceptible (effective infection contact rate). is the force of infection from to , where and is the incidence rate of aware susceptible. The infection spreads through direct contact between and with infected class (). The disease induced death rate is and received treatment at the rate of , then moved to removed class (), the class whose are assumed in this study not be involved in transmission as a result of efficacy of ART and has additional disease induced death rate of , is structured by the infection-age with the density function following the idea of [3], where is the parameter and is the infection-age. There is a maximum infection age at which a number of the infected individuals form infected class leave the class via death, . Meanwhile, since the infection period of HIV is long, then, the population is not constant, it is varying. A schematic diagram for the model is shown in Fig. 1. 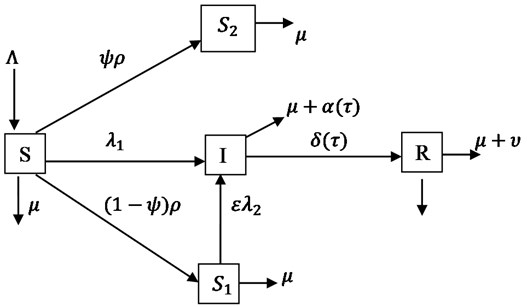 These assumptions lead to the following system of nonlinear integro-partial differential equations with non-local boundary conditions, which describes the dynamics of the transmission of the disease as:

The total Population size is given by:

Integration of Eq. (4) over is setting as:

is the maximum infection age and if then the infected person die of the disease i.e.:

3. Basic properties of the model

However, if , will decrease to . So is a bounded function of time. We can say that is bounded and at limiting equilibrium , . Besides any sum or difference of variables in with positive initial values will remain in or in a neighbourhood of . Thus is positively invariant and attracting with respect to the Eqs. (1)-(5) which are epidemiologically meaningful and mathematically well posed.

4. Existence and uniqueness of solution

We shall first and foremost establish the criteria for the existence and uniqueness of solution of the model Eqs. (4), (7) and (12). We define the derivative part of Eq. (4) as:

Then, the ordinary differential equation:

has the unique solution:

which gives the value of at all point on the characteristics passing through the point , when ; , we have that:

Thus, problem Eqs. (4)-(12) has the following unique solution that exists for all time:

Eq. (31) denotes the survival probability, the probability for an individual to survive to age ; thus .

The expected life of an infected individual given by Eq. (26).

If moreover, according to [6]:

Definition 1. A Solution to Eq. (38) is a function satisfying Eq. (38). First we have the following theorem, which is standard in the theory of Volterra equations. We provide a proof here for the sake of completeness.

Proof: first we assume that:

The solution of Eq. (38) is obtained using the standard Picard iteration defined, for by:

And initialized by on IR+.

Concerning Uniqueness of this solution of the model, we set and to be the two solutions of Eq. (38), so that:

Proof: the proof of Eqs. (60, 61) is quite straightforward and follows from the properties of which is stated in Theorem 1. We only note the following inequality concerning the last part of Eq. (51):

Eq. (63) provides the fact that Eq. (59) is intended to guarantee the continuity of through the line ; so that:

This shows that even when the initial age of infection is not regular the solution still has some regularity. We also note that the estimate Eq. (66) provides continuity of the solution with respect to initial age of infection . Hence, model Eqs. (4), (8) and (12) exist and are unique and well posed mathematically. In the norm of the space : this illustrates the existence and uniqueness of model Eqs. (4), (8) and (12) which is in agreement with the biological meaning of the age of infection for the period of disease.

And set , then we have the following results as the Disease Free Equilibrium (DFE):

Theorem 5. The DFE state is locally asymptotically stable if and unstable if .

Proof: to show the local stability of DFE state given by Eq. (91), we have the following results:

Define a function to be right hand side in Eq. (94). is continuously differentiable function with this shown that and therefore, is a decreasing function. Hence, any real solution of Eq. (94) is negative if and positive if . Thus, if , then DFE state is unstable.

To show that Eq. (94) has no complex solution with non-negative real part if . In fact, we set:

It follows from Eq. (97) that Eq. (94) has solutions only if . Thus, every solution of Eq. (94) must have a negative real part. We observed that . Therefore, the DFE state is locally asymptotically stable if .

We construct a Lyapunov function as outline in the work of [10] to study the global stability of the DFE state in this study.

Theorem 6. The DFE state of the model Eqs. (1-5) is Globally Asymptotically Stable (GAS) in if while unstable if .

Proof: Using the approach of [4], by constructing a suitable Lyapunov function as follows:

The equality holds if and only if , , , . Thus, from the solution Eq. (29) for the model Eqs. (4) and (8) along the characteristics lines, it can be see that for all . Hence, as . Therefore, from the LaSalle invariant Principle, the Disease-Free Equilibrium (DFE) is globally asymptotically stable (GAS) if .

The endemic equilibrium state is referred to as the state in which HIV/AIDS still persist in the population. We let:

Proof: to show the local stability, we linearize the system Eq. (13) around the endemic equilibrium and we have the following results:

Divide through by , then we have:

Suppose that is real, then from the characteristics Eqs. (122) and (97) and the fact that , we obtained that , since for , then right – hand side of Eq. (122) is non-negative while, the left-hand side is positive. Therefore, the endemic equilibrium is locally asymptotically stable, since the real root has the dominant real part.

Define for , . We construct the following Lyapunov functional:

The following Lemmas evaluate the derivatives , , , , along the solutions of Eqs. (1-5) respectively.

Proof: Direct differentiation of Eq. (124) is given by:

Proof: direct differentiation of Eq. (124) is given by:

Proof: Direct differentiation of Eq. (124) is given by:

Proof: applying the result in Lemma 6, we obtain the direct differentiation of Eq. (124) as:

Since , implies from Eq. (146) that with equality holding if and only if . From Eq. (143), if then will be negative definite, meaning that . Also it follows that if and only if , , , and , . Therefore, the largest compact invariant set in is the singleton if , then by the Lassalle’s invariant principle, is globally asymptotically stable in if .