Copyright © 2020 Zhimin Liu. This is an open access article distributed under the Creative Commons Attribution License, which permits unrestricted use, distribution, and reproduction in any medium, provided the original work is properly cited.

Aiming at the attitude control of the spherical underwater robot, the kinematics and dynamics of the underactuated attitude control adjusting system are analyzed, and its dynamics model is established. By using the differential homeomorphism transformation, the model was divided into two subsystems. Based on the advantages of sliding mode variable structure control, this paper adopts the hierarchical sliding mode variable structure method to design the sliding mode of different variables respectively, and then designs the sliding mode of the whole system. The presented control scheme can solve the coupling problem well. The controller has small overshoot and can well suppress chattering phenomenon. The simulation results show that the designed control law can make the system converge quickly and control the attitude of the underwater spherical robot effectively.

The traditional SMC is an effective method for dealing with bounded uncertainty/disturbances and parasitic dynamics of nonlinear system. In this paper, a hierarchical sliding mode control method is proposed. The sliding planes of each layer of the method are asymptotically stable, which can drive the underactuated underwater robot to the desired state. Because the sliding mode control has the function of anti-interference, the designed controller in this paper has strong adaptability to all kinds of external disturbances.

BYSQ-2 underwater spherical robot mainly consists of spherical catheter 1, Sleeve 2, long axis motor 3, weight pendulum 4 and short axis motor 5. Two motors placed perpendicular to each other, which can drive the weight pendulum to rotate to adjust the attitude. Physical prototype of robot is shown in Fig. 1.

Fig. 1. Physical prototype of the robot 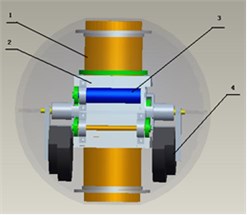 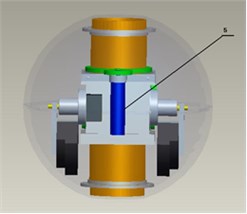 In order to analyze the motion of multi rigid body system of underwater spherical robot, the following four coordinate systems are established {0}, {1}, {2}, {3}, as shown in Fig. 2. 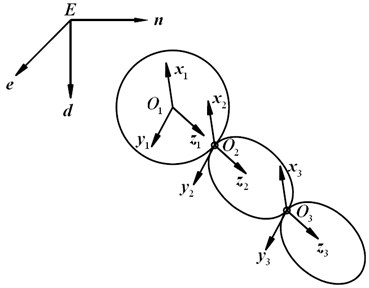 It can be concluded that the angular velocity and acceleration of the rigid body in the body coordinate system {1} are:

Let the angular velocity of the rigid body around the axis is , then:

The attitude transformation matrix can be obtained as:

Due to the symmetry of the structure, we have:

Since the values of are similar to those of and , it is considered that:

where and are the moment of inertia of the sleeve (rigid body ) around the axis and axis respectively.

Due to the regular shape of the sleeve, it can be approximately considered that:

where is the moment of inertia of the sleeve (rigid body ) about any axis in the plane.

Then the system model Eq. (16) can be rewritten as:

In the coordinate system {3}, the torque of short axis motor can be expressed as:

and can be expressed as:

Then make the input transformation, let:

Then the state equation of the spherical shell attitude control system is:

Considering modeling error and external interference, from Eq. (29), we can obtain:

where , and are modeling errors and external disturbances, and

Since the values of and are only two state variables needed in the design of control system, and there is no expected value, Eqs. (6-31) can be simplified to:

To design the control law conveniently, the system Eq. (32) is divided into two subsystems:

Then the back stepping sliding mode control law is designed for the two subsystems respectively.

The sliding mode function can be designed as:

If the following control laws are designed:

The total desired control law is set to:

where is the coupled switching control law of the system in approach stage.

where is a positive constant.

To get the coupled switching control law, the CLF is chosen as:

the first-order time-derivative of the CLF renders to:

If the exponential approach law is taken for the system from the initial state to the switching surface, then:

Secondly, for system the position error of the system is:

The sliding mode function is chosen by the following equation:

where is a positive constant.

If the exponential approach law is taken for the system from the initial state to the switching surface, then:

According to the aforementioned discussion, it is known that the control law Eqs. (50), (57) can drive arbitrary tracking errors to converge to the origin. 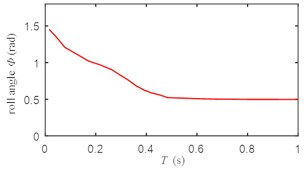 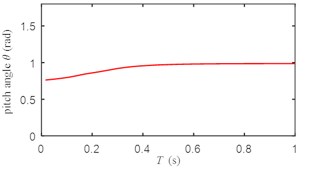 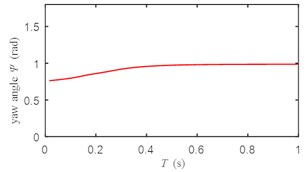 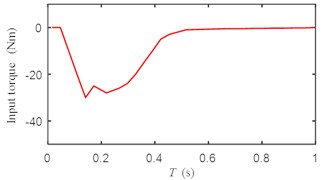 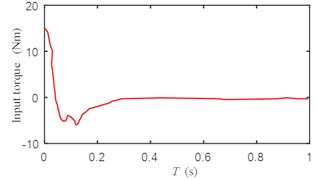 According to Figs. 3-5, the response curves of roll angle, pitch angle and yaw angle have no oscillation, the rise time is less than 0.6 s, the transition time is less than 1 s, and the system has good dynamic performance.

According to Fig. 6, the input torque of the long axis motor has a small chattering, but does not affect the output of the system.

According to Fig. 7, the input torque of the short axis motor have no chatter.

In order to further test the performance of the controller, we carried out a circular experiment. The expected trajectory of the underwater spherical robot is an arc with a radius of 0.5 m, that is 0.5 m, 0.5 m, the initial value of (, , ) is (0, 0.5, 0). The value of is from 0 to . The disturbance of the current can be expressed as .

The simulation results are shown in Figs. 8-11.

Fig. 8. Change of the yaw angle 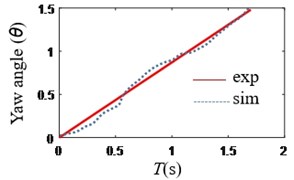 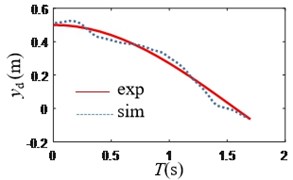 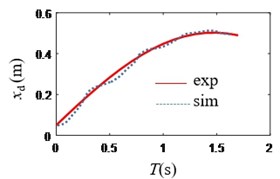 Fig. 11. Trajectory of the robot 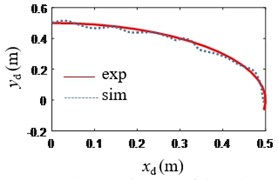 According to Figs. 10-11, the trajectory of the underwater spherical robot is an arc with an approximate radius of 0.5 m.

Therefore, the experimental results show that the established dynamic control law based on this model are effective, which can realize the tracking of the motion track in the vertical plane, The controller has small overshoot and can well suppress chattering phnomenon and the control accuracy is ideal.

The above simulation results show the feasibility of the hierarchical sliding mode control law in the attitude adjusting control of the underwater spherical robot.

The authors would like to thank the support of China National Natural Science Foundation (51175048) for the research.