Copyright © 2020 Vanliem Nguyen, et al. This is an open access article distributed under the Creative Commons Attribution License, which permits unrestricted use, distribution, and reproduction in any medium, provided the original work is properly cited. 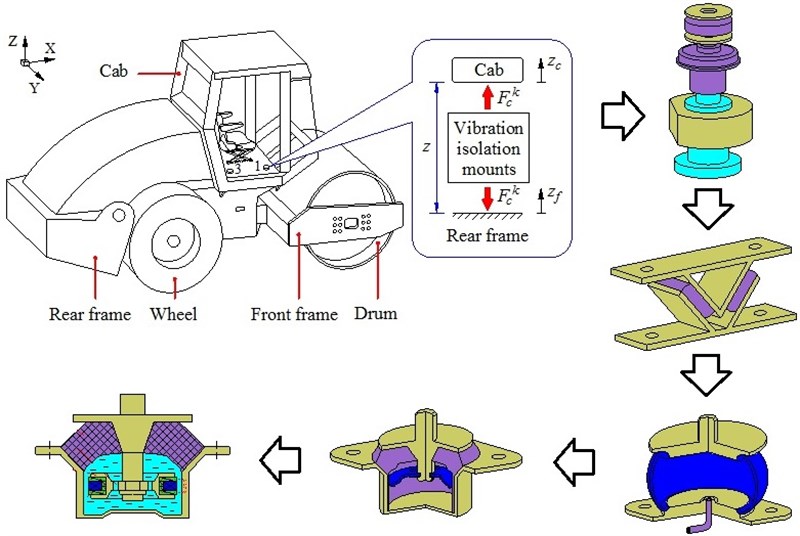 Since the production of the first commercial vibratory roller about 50 year ago, due to the trade competition, in recent years, the vibratory roller market had required not only increasingly working capacity but also enhancing the driver’s ride comfort. In order to reduce the effect of vibration on the operator, identification, and elimination of vibration sources generated in working conditions were the most important tasks for the designers. Therefore, the goal main of the designers is to enhance the vibratory drum’s force to reach maximum excitation result of the drum on the elasto-plastic [1-4], while reducing these vibration excitations transmitted to operator through the cab’s vibration isolation system and the seat’s suspension [5]. Therefore, the performance of the compression and the ride comfort of the vibratory rollers were strongly studied and improved in recent years [6-9].

2.1. Research of the vibration excitation sources 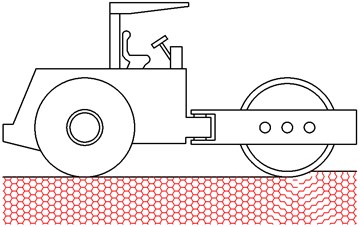 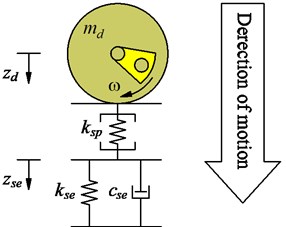 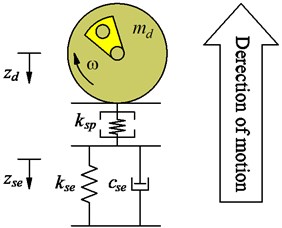 Besides, the deformable soil properties in the compression process were also investigated through visco-elastic soil models of Pietzsch D. et al., and Anderegg R. et al. [17, 18]. The study results showed that during drum-soil interaction, the density and stress-strain properties of soil were altered after each pass of the vibratory drum. The soft deformation soil may exhibit elastic and elastic-plastic deformation during a given compaction pass. The elastic-plastic properties of the soil ground then observed during the loading and unloading phases of a compaction cycle. Therefore, Adam and Kopf established the rigid drum-elastoplastic soil ground interaction model to determine the vibration equations of the vibratory drum [6], as shown in Fig. 2.

The researched results [6] showed that the compression effect was achieved mainly at the low frequencies of 28-30 Hz or high frequencies of 34-35 Hz of the excitation drum. However, the excitation force response of the vibrator drum acting on the vehicle floor was also strongly affected in these frequency regions. Therefore, this rigid drum-elastoplastic soil interaction model which fully described the deformable characteristics of the terrain soil grounds in the compression process was almost used to determine the vibration excitation force of the drum into the vehicle body and cab floor to study the cab’s ride comfort, especially at the low and high excitation frequencies 28 Hz and 35 Hz of the viratory drum [7, 9].

Besides, the researches of the tire-soft soil interaction models proposed by Wong [19] had been applied for researching the effect of soil deformation on off-road vehicle ride responses [3, 10, 11, 13, 20]. Additionally, the influence of the tires-deformable interaction with the random terrain surface on the off-road vehicle’s ride comfort responses was also researched [8]. Six types of the tire-rigid terrain contact models including the point, roller, fixed footprint, radial spring, flexible ring, and finite element contacts were then carried out [13] to evaluate the vibration response of the tire-terrain contact, as shown in Fig. 3. 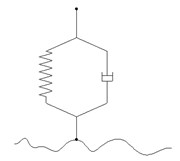 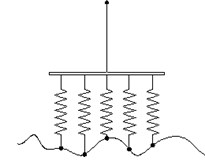 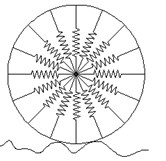 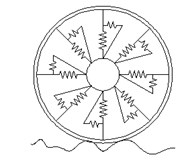 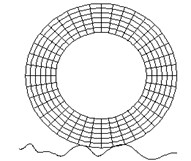 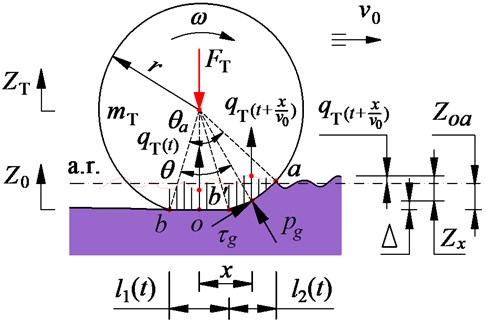 For the contact point model, the tire is simplified into a parallel suspension structure where the upper end is connected to the vehicle axle and lower end is located at the contact point between the tire and road surface. This can convert the roughness of the road surface to vertical force as a vertical excitation of the vehicle. This model can be used to determine the vertical tire dynamic [42]. The disadvantage of this model is that it is difficult to determine the horizontal force of the tire to the change of the roughness of the road surface. In previous researches, the point contact of the tire-terrain contact model had almost used to study the vehicle’s ride comfort traveling because it was easy to determine the vertical dynamic force of the tire at the tire-deformable terrain contact [11, 12, 21]. In the study of vibration of the vibratory roller, the effect of the rough terrain surface to the vehicle’s ride comfort response was also almost concerned based on the point contact of the tires-terrain contact model [3, 4, 6-12]. To determine the vibration excitation of the tires-deformable terrain interaction, the point contact mode in Fig. 4 was used to describe the vibration excitation of tires.

Based on the elastic tire-deformable terrain contact model [21], the vibration excitation of the tires is determinded by:

Based on the modeling and force equation, the deformed soil such as soil, sand, rocks and gravel [19] affecting the ride comfort was studied in the publications of [10, 13].

Consequently, the influence of the off-road terrain and elastorplastic on the ride comfort of the soil compactors are mainly researched via the mathematical model of Eqs. (1) and (2).

2.2. Development of the cab isolation systems

2.2.1. Traditional rubber mounts for the cab 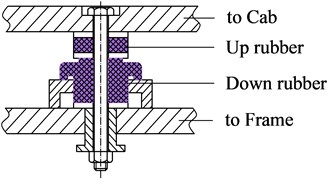 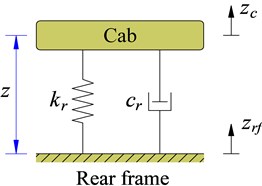 The traditional rubber mounts (TRM) were mainly characterized by the high stiffness and low damping which was modeled by the lumped parameters as in Fig. 6, and its mathematical equation was written as follows:

where the visco-elastic properties of the TRM are mainly described by the linear damping and stiffness coefficient .

2.2.2. Improvement the rubber mounts for the cab

To improve the cab’s ride comfort of the vibratory rollers, the traditional rubber mount was then optimized by improvement its structure [7, 21], as shown in Fig. 7. 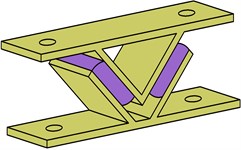 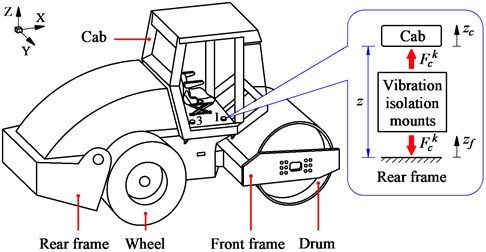 Based on the model of the vibratory roller under the low excitation frequency below 10 Hz, the pitch and roll vibration response of the cab of three different isolation mounts including the traditional rubber mounts [21, 29], hydraulic mounts (HM) [12, 27, 30], and pneumatic mounts (PM) [15, 31-32], were compared and analyzed under various off-road terrains. The vibratory roller model with cab isolation systems was shown in Fig. 8. 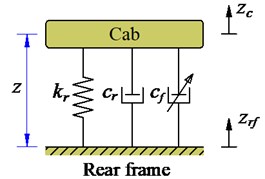 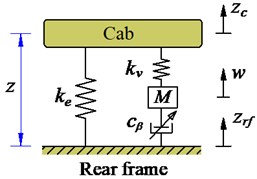 Theri mathematical equations of the vertical force responses of the HM and PM were described as follows:

Three isolation mounts of TRM, HM and PM were then simulated and tested. The research results showed that the low-frequency and high-stiffness characteristics of the HM had a good effect on isolating low-frequency vibration transmitted and controlling the cab shaking of the off-road vibratory roller, and the characteristics of the PM also had the same results in comparison with the HM. This is due to the main peformance of the nonlinear liquid damping forces of the HM, and of the nonlinear viscous damping forces of the PM. Thus, the effect of the vibration on the driver’s ride comfort is significantly improved by both HM and PM in the low-frequency range below 10 Hz. However, the vibration and noise isolation performance of the HM is better than the PM in the frequency range up 10 Hz, this is due to the stiffness coefficient of the rubber visco-elastic property in the HM decided. Therefore, the HM has a very clear performance on the isolation vibration of the vibratory roller cab. Similarly, some researches of the cab’s hydraulic mounts for the vehicles moving on the off-road terrains also showed the good performance of the hydraulic mounts for isolation vibrations [12]. All research results clearly improved the ride comfort. However, the vibration of the vertical operator’s seat and pitching cab angle were still great under various operation conditions according to International Organization for Standardization, ISO 2631-1:1997 [33]. Based on the hydraulic mount used for engine isolation [29-30, 34] and its semi-active hydraulic mount with MR damper used for engine isolation [35-37], as shown in Fig. 10, the semi-active hydraulic mounts were then applied for the off-road vibratory roller cab to further improve the ride comfort in the low-frequency region. 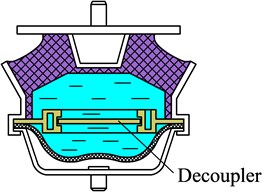 2.2.4. Semi-active hydraulic mount for the cab

Based on the magnetorheological damper fluid which was used in almost semi-active suspension system [35, 38], a semi-active hydraulic mount using MR damper fluid for vibration isolation was then developed and applied for the cab isolation system to further improve the ride comfort performance in the low-frequency range of the vibratory rollers [9, 14]. The control model was built in Fig. 11. 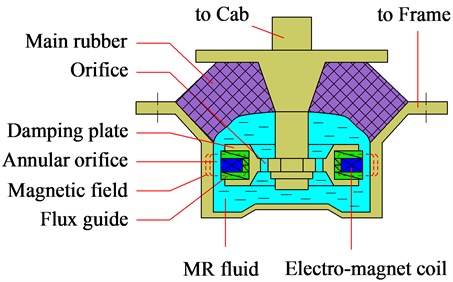 b) Its lumped parameter model

The corresponding dynamic force of semi-active cab’s isolation mount in the vertical direction is given by:

Based on the PID-Fuzzy control used the genetic algorithm program [26, 35, 38-40] to control the magnetorheological damper force of the semi-active hydraulic mount of , the simulation and experimental studies were given under both the vehicle conditions of the vehicle moving and compacting in the low frequency region and time region [9, 14, 41]. The study results showed that the semi-active hydraulic mount used on the vibratory roller cab significantly improved the operator’s ride comfort in comparison with the passive hydraulic mount or other cab isolation mounts such as the pneumatic or rubber mounts [9]. This is the optimal result of the cab isolation system for current soil compactors. The drivers ride comfort and cabin shaking angle have been greatly improved based on ISO 2631-1:1997 [33].

Based on the author’s understanding of the development the cab isolation system for the soil compactors as well as the outstanding issues that have not yet been thoroughly solved, especially the problem of the cab shaking. The author has two proposals for such solutions as follows: (1) Adding a horizontal damping mount to the cab can help reduce the horizontal impact force thus can prevent the cab shaking. (2) Based on the advantages of the resistance of both HM and PM, developing an hydro-pneumatic mount (HPM) and its control for the soil compactor cab is also needed.

This study is supported by Hubei Polytechnic University Teaching and Research Projects [No. 19XJK17R].