Copyright © 2020 Yuxuan Wang, et al. This is an open access article distributed under the Creative Commons Attribution License, which permits unrestricted use, distribution, and reproduction in any medium, provided the original work is properly cited.

3D Slicer [1] is a free open source software package based on VTK, ITK, CTK, KWW, CMake, Qt and Python. Its application scope is mainly the analysis and research of medical image, aiming at realizing the visualization of medical image. According to the principle of C++ programming Slicer code, ITK and VTK design method is also applied to it, MATLAB, Python, Tcl and other design code will also appear in it. C++ and python are its main programming languages. Slicer has a complex structure, but it has good learning value. The advantage of Slicer is its powerful function. Only when we have a detailed understanding of Slicer's structure can we understand and learn this complex and powerful system in depth.

(1) Multi-image format: It can transform the format of images to each other. Only in the work of filtering module can we do this work. The visualization function of 3D Slicer can be transformed by multiple data.

(3) Dynamic loaded modules can organize Slicer's various functions. Slicer now supports three modules, and users see the same module. Slicer has different internal access rights for the three modules, and the developer chooses which module to use depends on the situation.

(4) The entity of translating and interpreting language provides ontology to an abstract object of other interfaces. The operation separates the external communication method so that it can be modified internally without affecting the way other entities interact with it. 3D Slicer can be adopted or encapsulated across platforms, and enables the 3D slicer platform to be used under Windows, Linux and other system platforms. It integrates many interfaces of biomedical research software communication, so it has good software compatibility.

2. The significance of medical image segmentation

(3) Locate the area of interest. Determine the location, shape, and distribution of the lesion structure, and locate targets for treatment options such as puncture and surgical image-guided surgery.

(4) Manage image information. After the image is segmented, each area is clear, and you can choose between them, focusing on those target areas. It can also compress image data without losing useful information, which is convenient for archiving, retrieval and transmission [2].

Segment Editor module is a module that can be used for segmentation, subdivision (also known as outline) depicting interesting structure. Some tools mimic painting interfaces such as Photoshop or gimp, but can work on three-dimensional array voxels rather than two-dimensional pixels. Some new functions have been added to the new module editor formed after the module editor module has been improved. Including alternating subdivision, display in 2D and 3D views, visualization options for each segment, 3D view editing, creating segmentation by interpolation or interpolation on several slices, editing slices in any direction.

5. Segmentation of lesions in brain CT in 3D Slicer

5.1. The basic principle of threshold segmentation

Threshold segmentation [4] is a simple region-based image segmentation technique. Image pixel points are divided into several parts by setting different feature thresholds. Common features include: grayscale and color features directly from the original image. The transformed feature can effectively compress the amount of data, and can simplify the analysis and processing steps. Therefore, in general, the image preprocessing process is a necessary process before image analysis, feature extraction and pattern recognition. The purpose of image thresholding is to divide the pixel set according to the gray level. Each subset obtained forms an area corresponding to the real scene. Each area has the same attributes inside, and the adjacent area layout has the same attributes.

The basic principle of thresholding segmentation is described as follows:

In almost all medical images, both the object and the background have a distribution of gray values, and sometimes double or multi-peak in the gray histogram. By using the weighted transformed histogram, the peak-to-valley boundary more obvious than the original histogram can be obtained, thereby improving the image segmentation.

Gray-level histogram [6] is the two-dimensional relationship between the number of gray-level pixels and gray-level . It reflects the statistical characteristics of gray-level distribution on an image.

If the histogram of a gray image has a gray level range of 0, 1,…, and the number of pixels is when the gray level is , then the total pixel of an image is:

The probability of occurrence of gray level is:

When the image in the grayscale image is relatively simple and the gray distribution of objects is regular, the peaks and peaks of the background and image are formed on the grayscale histogram of the image. Therefore, the gray value corresponding to the valley between the two peaks is chosen as the threshold value to separate the two regions.

Brain CT images are irregular, uncertain and fuzzy, and it is difficult to find clear boundaries between different tissues. The FCM clustering algorithm is suitable for the characteristics of uncertainty and ambiguity in gray images. It is an unsupervised fuzzy clustering process that reduces human intervention. When used for brain CT image segmentation, the FCM algorithm clusters the gray values of each pixel [8].

The FCM algorithm is as follows:

Eq. (5) is the clustering objective function, where is the fuzzy membership matrix. represents the degree of membership of the -th data corresponding to the -th category. is the set of cluster centers. represents the distance from the -th pixel to the -th cluster center, and is the number of cluster categories, and . is the fuzzy weighted index, and . Set is a set of pixels to be clustered. The objective function is minimized by the following iterative optimization algorithm. The specific algorithm is as follows: 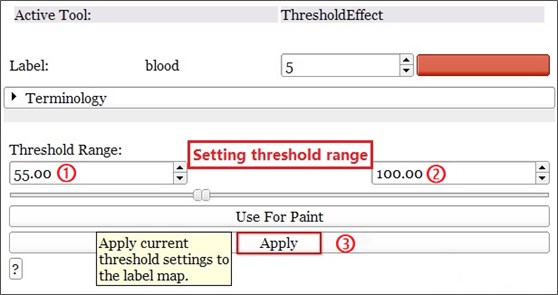 (5) Run division: Use the Mask volume function to output the division and save the set parameters and run the program to get divided objects.

Fig. 6 is the experimental data of CT brain hematoma images. The threshold method is used to achieve image segmentation, and the results are shown in the figure [11].

Threshold segmentation has the best effect on CT slices, and the algorithm is simple and fast. However, when selecting the threshold, you need to judge based on experience, or do multiple tentative segmentation first, and then perform threshold adjustment.

The FCM algorithm has a long calculation time. For areas with smooth edges, it requires less interaction times to complete the segmentation. If the edge smoothness is poor, in order to perform accurate segmentation, the number of interactions must be increased, and the total time of segmentation will also be increased. This method can obtain better image segmentation results, a lot of detailed information is retained, and the edge area is also very clear, which is closer to the real block area [12].

Fig. 9. Segmentation results of the FCM algorithm on the median sagittal section

Image segmentation is a very important content in image processing technology, and also a key link in image engineering. The quality of image segmentation directly affects the subsequent development of related work such as image analysis and image understanding. Among the many image segmentation methods, the threshold method is the most widely used and studied, and has the characteristics of low computational complexity and good segmentation effect. This paper deeply analyzes and discusses the principle and process of segmentation of medical image threshold method in the segment editor module of 3D Slicer, which provides a reference direction for future research.

This is a new field, and there are new directions waiting for us to explore. Many new technologies are waiting for us to master. There is still a lot of room for development in this area. Advancing with the times is our pursuit at this stage. And 3D Slicer is a software platform with great potential, it is worthy of us to study it in depth, and more to apply it in medical image processing analysis [13].