Copyright © 2020 Liyuan Ma, et al. This is an open access article distributed under the Creative Commons Attribution License, which permits unrestricted use, distribution, and reproduction in any medium, provided the original work is properly cited.

Slicer module is an important part of software, which provides algorithmic support for data processing for the realization of various functions of software. As an external plug-in that needs to be installed, extensions have strong independence. Developers can redevelop the original extension module and modify its functions and interfaces in order to achieve better results to meet the requirements of medical use. In this paper, the feasibility scheme and specific operation steps for the secondary development of the extended module are proposed, so as to improve efficiency, simplify the operation process, and facilitate the use of Slicer software in clinical medicine and medical research. 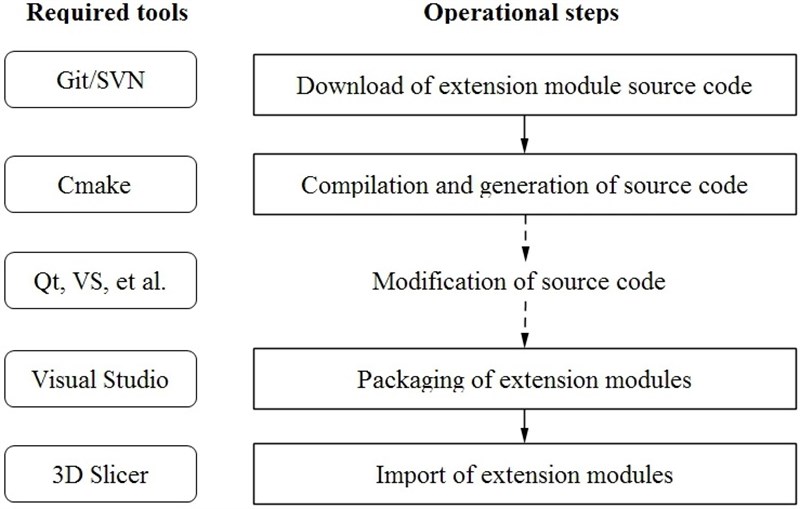 As an open source software [1] for medical image processing and 3D visualization [2], 3D Slicer has many applications [3] in medicine and research. Slicer platform is based on open source software development such as VTK, ITK, CTK, CMake, Qt and Python. The main programming languages are C++, Python and so on. Slicer architecture [4] can be divided into three layers: basic layer, algorithm layer and application layer. The structure diagram is as shown in Fig. 1.

The base layer is provided by the operating system with the lowest level library, such as OpenGL, hardware driver, etc. OpenGL is based on 3D, professional applications, providing high-quality 3D graphics and image performance, to efficiently use the windows and graphics resources provided by the host system, while hardware driver meets accelerated rendering. As the middle layer of the architecture, the algorithm layer is a portable dependency library, including the basic programming language library and some algorithm libraries for image processing. It provides a higher level of functions and abstractions, including CMake, ITK, CTK, VTK and so on. The application layer is Slicer’s application, including core, module and extension. The application core implements the user interface, provides the data input/output interface, uses the algorithm to realize visualization, and reserves the interface for developing new modules and extensions. Modules and extensions implement data processing algorithms, such as segmentation, registration, image filtering and so on.

Secondary development of extension module and modification of its specific algorithm and interface can optimize software functions and beautify its appearance, so as to achieve better results. Chen studied on 3D Slicer’s intraoperative implant implantation surgical navigation system [5], developed and verified the SNS module to support the surgical navigation, reliable calibration was carried out on the drilling operation. Point-based positioning and surface matching positioning, real-time tracking and display of the position and orientation of the surgical drill on a computer screen has been achieved, which can reduce the risk of surgery. Saleh Choueib and others added VR function to the open source medical image analysis and visualization platform 3D Slicer, developed 3D Slicer’s VR extension-SlicerVirtualReality (SlicerVR) [6], making it a medical virtual reality visualization platform. Wenye Zeng proposed an internationalization method [7] suitable for Slicer software system by studying Qt internationalization system and Slicer software platform interface structure and interface creation method. By developing the extension, the Slicer interface is optimized for medical image processing. In this paper, the feasibility scheme of the secondary development of Slicer extension and specific operational steps are described in detail to assist Slicer software extension functions and beautify the appearance so that the software can be better applied in medicine and research.

Fig. 2. The diagram of Slicer built-in module and expansion module 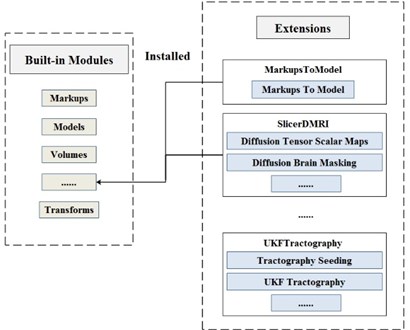 There are three types of Slicer modules: Command Line Interface (CLI), Scripted Modules, Loadable Modules. A module may be just one or two or three of these types, but the type of module does not affect the final look and feel of the software. CLI can only communicate through the predefined interface, cannot directly access the core of Slicer, and cannot directly operate the user interface, so it has limited interaction. Script modules are written in Python, more suitable for development, can access most of the internal content of the software, in the case of no DCMTK, ITK, can only access the content encapsulated in Python. Loadable modules are C++ plug-ins built for Slicer that define custom GUI for specific behavior because they have complete control over the application.

Each extension of Slicer has a unique algorithm to achieve corresponding functions. For example, MarkupsToModel has the ability to create a tube or closed surface model from the points marked by the reference node; SlicerDMRI is an umbrella extension of the Slicer Diffusion MRI function; UKF Tractography traces fibers in a DWI Volume using the multiple tensor unscented Kalman Filter methodology.

Before modifying the extension module, we need to build an appropriate environment for it. The tools we need to download include CMake, SVN, Git, Visual Studio, Qt, etc., which are explained respectively [8].

CMake mainly solves cross-platform compilation problems. Both Slicer itself and its extension modules use multiple programming languages, and the compilation process requires multiple compilers. CMake is to use a simple statement to describe the construction process of all platforms, generate a Makefile or Project file, program compilation information is written into the CmakeLists.txt file.

SVN, or Subversion, places the data in an archive repository and records every change to the file, making changes to the code obvious and easy to restore to a previous version. Slicer source code and most of its method libraries are using SVN code management.

Git is an open source distributed version control system. A large part of the libraries used in compiling Slicer also use Git for version control. Slicer does not build its own Git server, and the source code is hosted on GitHub’s server.

Qt is a cross-platform C++ graphical user interface application development framework that is easy to extend and allows component programming. You can compile the extension module either with the full Qt version compiled or by yourself. This software mainly aims at the modification of module interface in the development process.

Because the source code is written in many languages, CMake cross-platform software is needed to solve the compilation problem [9]. Open the software, as shown in Fig. 4, select the storage location of good extension module source code, and then choose the location of the generated file, attention to the path that don’t exist in Chinese characters, check the Advanced, add 5 generated path, click the Configure, in the pop-up dialog box, select the generator at the specified project the downloaded version of Visual Studio [10], choose suitable for generator digits, and then click Finish to start compilation. After compiling, click Generate and open Visual Studio to see the code.

Fig. 3. a) View source location from module details, b) the link of download module source code 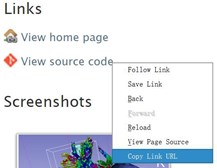 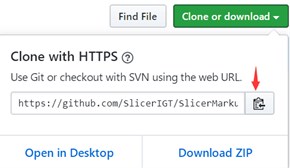 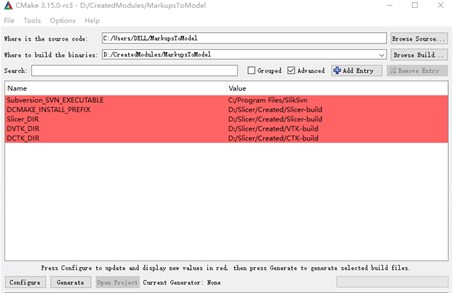 For the first case, the packaged file can be generated directly. Take the MarkupsToModel extension as an example. The project files are shown in Fig. 5(a). Right-click Package project to generate. After make a success, the _CPack_Packages folder will appear in the extended generation folder. In this folder, there is a package file with the corresponding version number, as shown in Fig. 5(b).

In the second case, the packaged file cannot be generated directly. Take the SlicerDMRI extension as an example, and the project file is shown in Fig. 6(a). Because there is no Package project, you need to right-click the inner project to generate the required files for packaging. 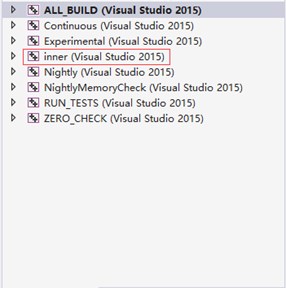 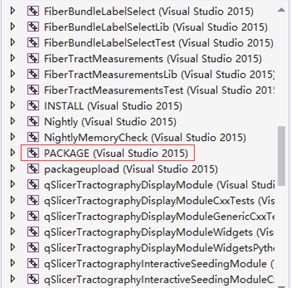 Fig. 7. a) SlicerDMRI.sln file in the inner-build folder, b) the package file of SlicerDMRI extension 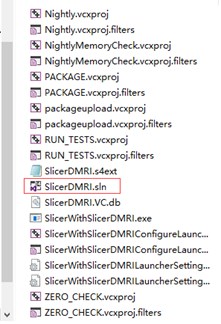 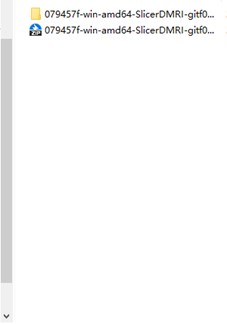 After the above operation is completed, import the module. When Slicer is opened, there are two methods for module import, which are described respectively below.

Method 1: Go to Edit → Application Settings → Modules → and select package files, as shown in Fig. 9. After a reboot, you will have the extension and its internal modules.

Fig. 9. Sample of the packaged files to import 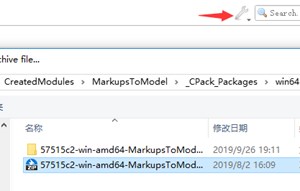 Because 3D Slicer software provides free and powerful cross-platform [11] processing tools, it is widely used in many fields [12]. On this basis, the method of this article is used for secondary development of its extension module to enrich and improve its functions, beautify its appearance, and enhance the user experience, making the software more widely used in medical care.

Fig. 11. Modules in both extensions are imported 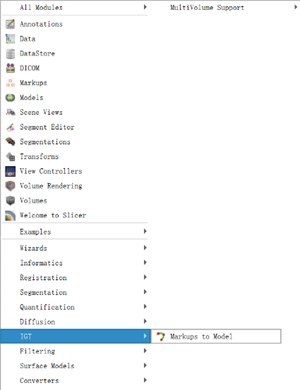 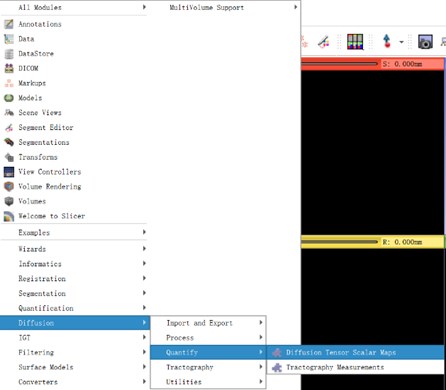 Especially for meeting the requirements of medical equipment software with high accuracy, high speed, and safety, it is of great significance to optimize the algorithm through secondary development, reduce the software running time and improve the calculation accuracy. For example, by carrying out the secondary development of some of the software’s expansion modules, and then modifying and simplifying the software interface, the packaged software is applied to surgical navigation, which is conducive to improving surgical efficiency. The operation steps summarized in this article are part of secondary development and provide tutorials for beginners.

This work was supported by the National Science Foundation of China (51674121,61702184), Tangshan Innovation Team Project (18130209B, 18130210B), the Hebei Key Laboratory of Science and Application, Research and practice project of higher education teaching reform in Hebei Province (2017GJJG111) and Ministry of education production university cooperation education project (201802305012).