Copyright © 2020 Arthur Horn, et al. This is an open access article distributed under the Creative Commons Attribution License, which permits unrestricted use, distribution, and reproduction in any medium, provided the original work is properly cited. 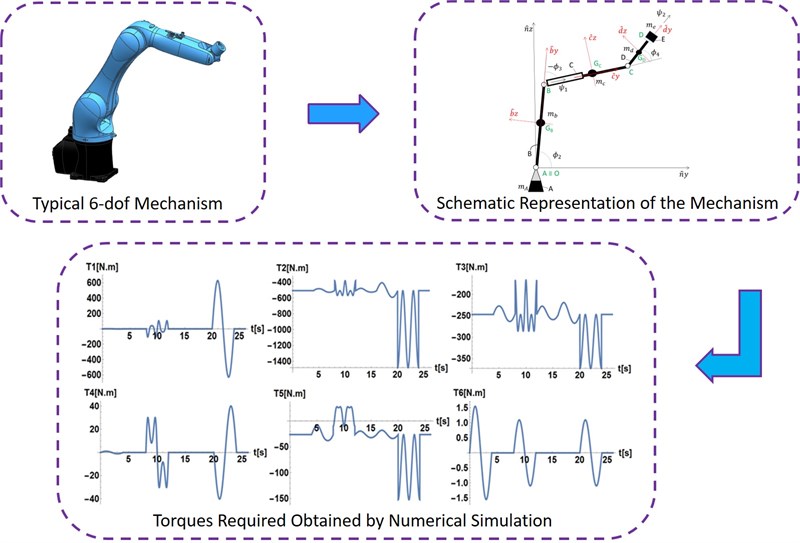 Maggi’s equations were introduced by Gian Antonio Maggi in 1896 as an alternative approach to deal with constrained multibody systems (with either holonomic or linear non-holonomic constraints). As described in [1], Maggi’s equation can be understood as an extension of Lagrangian formalism that, by means of a simple algorithm based on finding a linear operator onto the kernel of the constraint equations Jacobian, allows the elimination of the undetermined multipliers from the equations of motion of a constrained mechanical.

Whenever redundant generalized coordinates are used in a given formulation (which is inevitable in the case of non-holonomic systems and might be convenient for holonomic ones), the requirement of using indeterminate multipliers in the conventional Lagrangian formalism arises, leading to a system of differential-algebraic equations of motion (DAEs) instead of simply ordinary differential equations (ODEs) [2, 3].

Even though Maggi’s equation provides an alternative formalism in which the undetermined multipliers are eliminated, problems associated with the numerical integration of DAEs, due to violation of constraint equations are still present. Baumgarte method provides an stabilization algorithm in order to improve the numerical accuracy of the numerical solution of these equations [4].

Malvezzi et al. [5] and Orsino et al. [6] proposed a qualitative comparison based on the use of Lagrange’s, Maggi’s and Kane’s equations applied to the modelling of multibody mechanical systems. In those papers, it has been shown that the application of Maggi’s equations, combined with a proper choice of a redundant set of generalized coordinates, leads to a simpler derivation of the dynamic equations of motion, in a suitable form for numerical simulations. Moreover, it also has been shown that, the procedure for adding new bodies and obtaining differential equations of motion without the terms related to constraints forces is simple.

Newton-Euler equations and Lagrange equations are mostly used in the dynamic modeling of many-degree-of-freedom multibody systems. As an alternative to the above approach, the purpose of this paper is to illustrate the advantages of applying Maggi’s equations along with a solid formalism. The chosen system is a serial six degrees of freedom (6-dof) robot manipulator, a classical example of a complex constrained mechanical system. Finally, in order to investigate the numerical performance of the equations of motion obtained by this approach, an inverse dynamics simulation is performed, to obtain the theoretical time series of the torques required to perform a proposed trajectory.

This section details the derivation of the differential equations of motion of the 6-dof serial mechanism illustrated in Fig. 1. This mechanism consists of 5 rigid bodies (A, B, C, D and E). It is noteworthy that the bodies C and E can perform rotations around the axes and , respectively, properly controlled by actuators.

Fig. 1(a) illustrates the typical six degree of freedom mechanical system that was chosen to be studied, while Fig. 1(b) shows its schematic representation.

Fig. 1. a) Typical mechanism, b) schematic representation of the 6-dof mechanism in a configuration in which the centerlines of the links remain in the plane 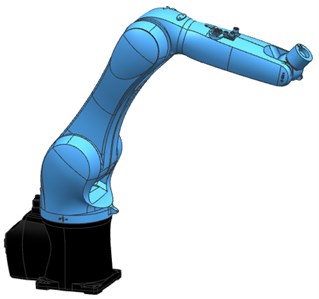 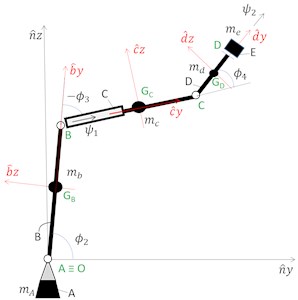 The following hypotheses are adopted in the derivation of the mathematical model: all the bodies are considered rigid bodies; all joints are ideal and the axes , , , , , , , , , , and correspond to the principal axes of inertia of the respective bodies.

Regarding the kinematic description of the system, consider the following notation:

– is the rotation matrix between the bases of the coordinate systems H and I.

– is the column-matrix representation, with components expressed in the base of the coordinate system F, of the position vector of point G with respect to point O.

– is the column-matrix representation, with components expressed in the base of the coordinate system F, of the angular velocity vector of body H with respect to the reference frame (or rigid-body) I.

Thus, it is possible to relate the Cartesian coordinates of the center of gravity of the bodies with the generalized angular coordinates. These constraint equations can be expressed in the form , whose time derivative can be expressed by the following Pfaff form Eq. (7) [1]:

Let be a matrix ×, ( – number of degrees of freedom, – number of generalized coordinates) chosen to make the following matrix invertible [1]:

Considering the angular coordinates defined in Table 1, the following expressions can be written for angular velocity vectors:

The expression for the kinetic energy of this mechanism can be expressed as follows:

The potential energy of the mechanical system can be described as follows:

Based on the previously defined expressions, and considering that is the Lagrangian of the system, the equations of motion for the 6-dof mechanism can be directly obtained for Maggi’s equations:

Adopting the equations of motion derived in the last section, a numerical simulation scenario was proposed. In this section an inverse dynamics simulation is performed, in order to determine the theoretical time series of the torques required to perform a given prescribed trajectory. Table 2 shows the mechanism parameters adopted in the numerical simulation.

Maggi’s equations were used to derive a complete non-linear model for the dynamics of 6 degrees of freedom mechanism.

The use of redundant generalized coordinates, led to a significant simplification in the terms related to kinetic and potential energy, which led to a much less complex derivation when compared to the conventional Lagrangian approach.

The use of Baumgarte method avoid the presence of numerical instability associated with the violation of constraints equations during numerical integration.

Finally, the approach applied here to obtain the differential equations of motion might be useful in the dynamic modeling of many other multiple-degree-of-freedom multibody systems.