Copyright © 2020 Hongbo Liu, et al. This is an open access article distributed under the Creative Commons Attribution License, which permits unrestricted use, distribution, and reproduction in any medium, provided the original work is properly cited.

At present, the common driving form of manipulator mainly includes motor drive, fluid drive and other forms [1]. Electric driven has the advantages of high precision and easy to control, but it has the disadvantages of large volume and poor flexibility [2]. The biggest advantage of hydraulic driven is large thrust, but it has the disadvantages of high cost, poor reliability and easy leakage [3]. In order to overcome the shortcomings of rigid manipulators and combine with the research status and trend of the flexible pneumatic actuator, a flexible finger is designed by using the multi-directional bending joint and unidirectional bending joint. The finger can bend like the human finger and can independently and coordinately control the bending angle of each joint. It has good flexibility and simple structure and can be used in agriculture, picking robot, service robot and other fields.

2. Structure and function of flexible joint

To facilitate the analysis on the position and posture of the finger, the coordinate system - is established, where (1, 2, 3, 4, 5, 6) denotes the feature points on the finger as showed in Fig. 2.

According to the deformation law of each joint and the geometric structure of the connecting piece, the transformation matrix of the two adjacent key points on the finger can be obtained when the fingers are forward bending.

The transformation of coordinates from the end to the other end of the unidirectional bending joint when it is bending can be expressed as:

where is the bending angel of the joint. According to the deformation of the joint and its length, the following equations can be known:

where 16 mm is the distance from the center of the latex tube to the spring plate, 60 mm is the effective deformation length of the joint.

Fig. 1. Three-dimensional model of the finger 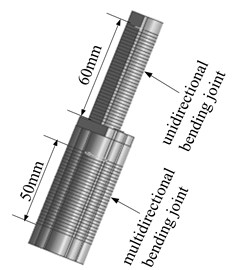 Fig. 2. Coordinate system of the finger

Similarly, the transformation of coordinates from the end to the other end of the multi-directional bending joint can be expressed as:

where is the bending angel of the joint. According to the deformation of the joint and its length, the following equations can be known:

where 60 mm is the effective deformation length of the joint, is the elongation of the joint.

The transformation of coordinates from the end to the other end of the connector can be expressed as:

According to the geometric shape of the connector: .

The changes of elongation and bending angle with air pressure were obtained by static experiments, which are shown in Figs. 3-5 respectively.

Fig. 3. The curve of the elongation and pressure of multi-directional bending joint 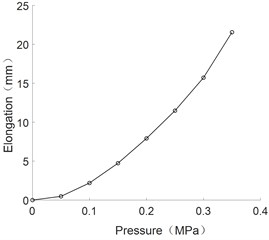 Fig. 4. The curve of bending angle and pressure of unidirectional bending joint 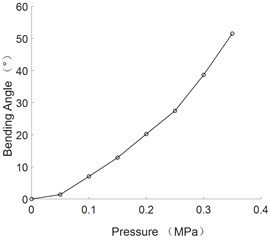 Fig. 5. The curve of bending angle and pressure of multi-directional bending joint 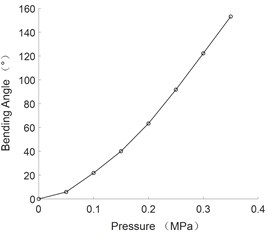 As can be seen from the figure, the bending angle of flexible joints and the axial elongation are positively correlated with the pressure value.

The experimental data were fitted by quadratic polynomial and the corresponding empirical formula was obtained as follows:

where is the elongation of the of multi-directional bending joint, is the value of air pressure:

where is the elongation of the of multi-directional bending joint:

where is the bending angle of the of unidirectional bending joint. 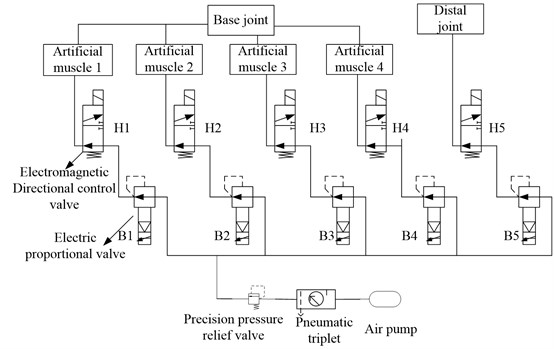 Fig. 7. Different gestures of the finger 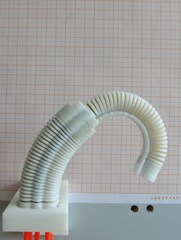 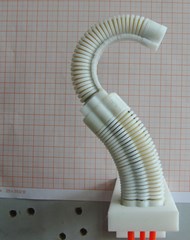 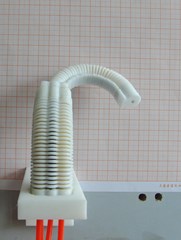 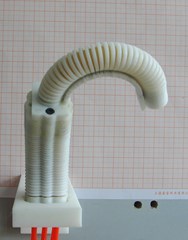 The empirical formula above are substituted into kinematic equation to obtain the different movement trajectory of the finger, which are shown in Fig. 8. 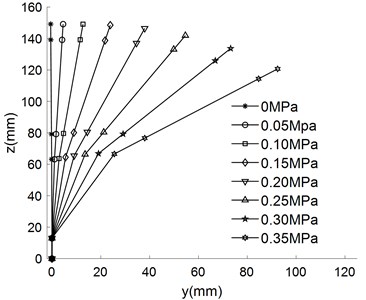 a) Base joint drives independently 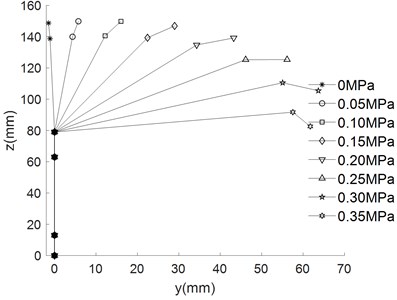 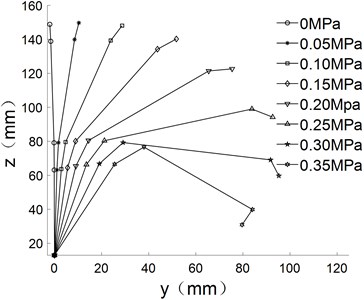 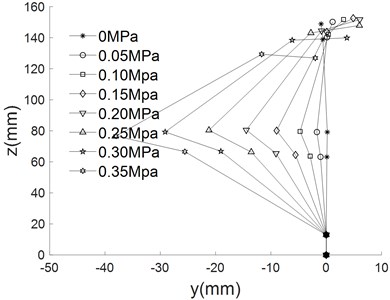 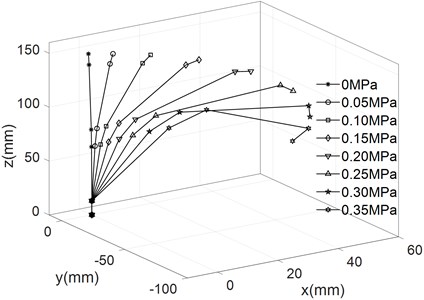 1) The biggest characteristic of the finger developed in this paper is that it is directly driven by artificial muscle, does not need decelerating device and transmission device and has certain elasticity and good cushioning.

3) The kinematic equation of the finger is established by using the homogeneous coordinate change matrix and the movement trajectory of the finger is obtained and verified by experiments. The maximum bending angles of forward bending, reverse bending and lateral swing were 208.8°, 105.2° and 51.51° respectively when the air pressure is 0.35 MPa. The experimental and simulation results show that the finger movements are flexible, which can realize forward bending, reverse bending and lateral swing. The complex gesture and grasping action can be realized by the cooperation of multiple flexible fingers.