Copyright © 2020 Arjun Srivathsa, et al. This is an open access article distributed under the Creative Commons Attribution License, which permits unrestricted use, distribution, and reproduction in any medium, provided the original work is properly cited.

The landing gear plays a very important role during landing by absorbing the high impact energy of the aircraft. The main landing gear absorbs the bulk of the load to reduce the load experienced by both the aircraft fuselage and the nose landing gear. In this paper, a mathematical approach is used to extract the dynamic characteristics of the system. A two-degree of freedom mathematical model of the main landing gear is developed. This model is used to derive the dynamic equations of the landing gear system and to study the behaviour of main landing gear during main gear and nose gear touchdown conditions. The non-linear stiffness and damping co-efficient in an Oleo-Pneumatic shock absorber are integrated into the system to achieve a more accurate response of the system. The response of this system is established by adopting a complex modal analysis approach to account for the non-classical damping exhibited by the system. The obtained spring force, damping force and responses are reported. This work provides an alternative approach using complex modal analysis to obtain results for complex systems exhibiting non-linear characteristics.

The landing gear ensures the aircraft lands safely, slows down and has a comfortable trip during taxi. This is achieved by absorbing high amount of impact load during landing. Therefore, landing gear system is one of the subsystems which is most crucial for an aircraft. Failure in absorption of these high loads would lead to catastrophic and fatal accidents. The ability to mathematically obtain response of the aircraft could greatly assist in optimizing and validating the performance of the shock absorber to improve its performance and increase its energy absorbing capacity.

The shock absorber in an aircraft landing gear exhibits non-linear stiffness and damping parameters. Obtaining response for a system of this nature using conventional Modal analysis is difficult. Most of the works on dynamic characteristics of landing gear are based on simulation or an experimental approach. The novelty of the present work is to demonstrate the dynamic characteristic of the landing gear, incorporating the non-linear stiffness and damping parameters in the pneumatic shock absorber during touchdown duration using complex modal analysis. The nonlinear stiffness and damping parameters are derived and are integrated into the system. Computing code is created in MatLab and is used to extract the natural frequencies, Response, Spring Force and Damping Force of the system during landing.

In the Oleo-Pneumatic shock absorber the spring and damping characteristics are achieved by the gas and the hydraulic fluids in the system respectively. The spring action is provided by the gas during compression and the damping effect is achieved by the hydraulic fluid moving from one chamber to another through the orifice. The system strongly exhibits non-linear characteristics, resulting in a more accurate behaviour of the system. 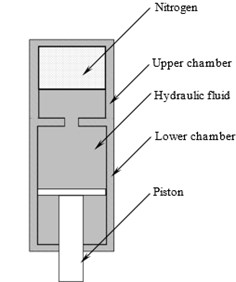 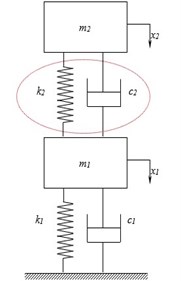 The equation of motion of the system can be written in matrix form as:

Which can be further represented as:

The solution of the Eq. (3) is given as follows:

A non-linear characteristic of gas stiffness () of the system is represented [7] as:

Using mass conservation law and Bernoulli’s equation the damping force is considered [6] as:

The non-linear damping co-efficient () is obtained as:

Fig. 3 shows the variation of strut length with time for an aircraft landing in a downhill runway at a sink rate of 5 m/s [3]. Strut stroke variations are used to calculate the stiffness and damping co-efficient of the system.

Table 1. The parameter values used in the simulation [5, 6] 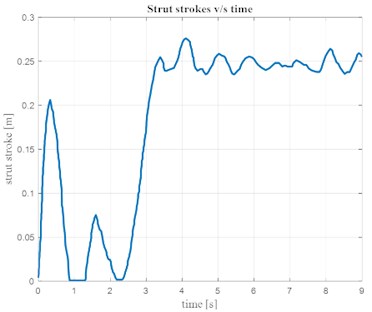 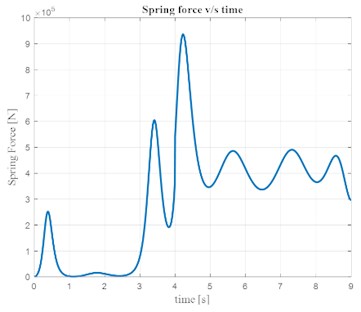 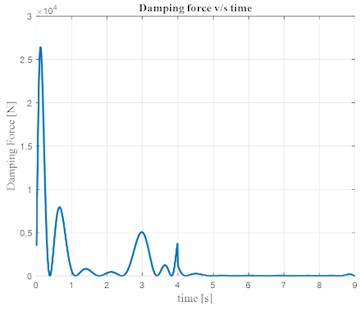 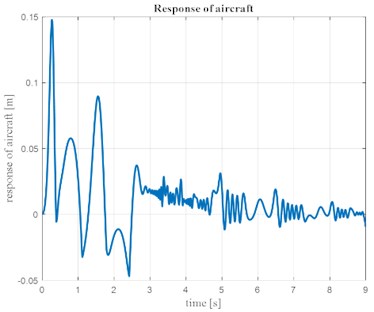 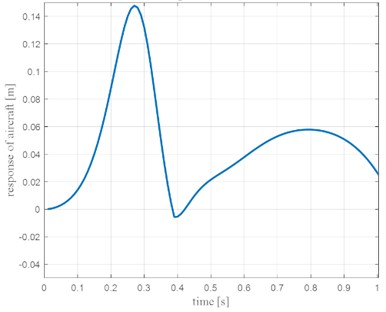 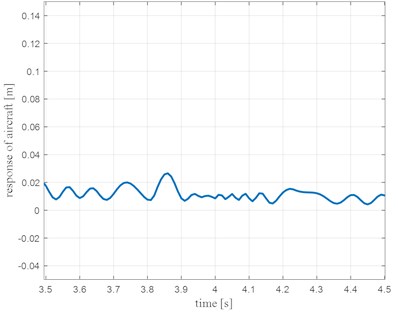 The response of an aircraft during landing is one of the key factors in designing a safe and optimal shock absorber. The current work explores an analytical approach in solving the non-linear characteristics of an aircraft landing gear system. A mathematical approach for finding responses of a non-linear system could greatly help in validation of simulations for future works and not totally rely on experimentation which is an expensive and a time consuming alternative. This can also aid in further optimising the shock absorber, significantly increasing the life of the landing gear and reduce the loads experienced by the fuselage of the aircraft.