Stiffness of a new unilateral external fixator – a biomechanical study

Copyright © 2020 Xia Zhao, et al. This is an open access article distributed under the Creative Commons Attribution License, which permits unrestricted use, distribution, and reproduction in any medium, provided the original work is properly cited. 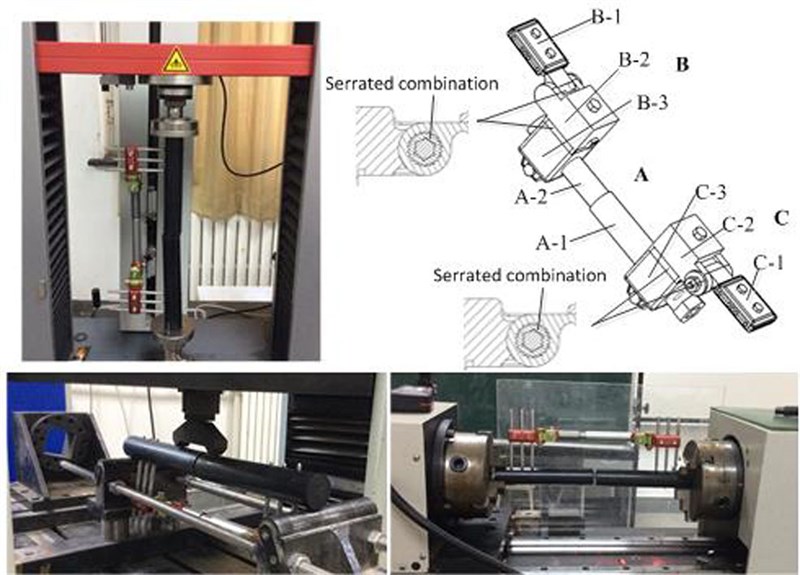 Unilateral external fixator is commonly used to stabilize initial fractured bone for polytraumatised patients who are prone to complications [1, 2]. If orthopedist can use the fixator well, the risk of complications is reduced to a very low level [3-8]. The mechanical environment has a great influence on the callus formation during the initial healing period. The stiffness of the fixator is important, because the motion of the device has not only effect on fracture correction and healing of bone tissue, but also affects the loosening of pin. This can easily lead to treatment failure if this factor is inadequate [9-11]. Many researchers have studied the stiffness of external fixators in terms of physiology under axial compression, bending and torsional loads, which will result in different mechanical environments in the fractured site [12-15]. They also equipped load sensor on external fixator to evaluate their characteristics [16, 17]. Different kinds of fixators have different loading paths, which exhibit different stiffnesses [18, 19]. Better understanding the stiffness of fixator helps adapt to reach the desired interfragmentary movement during the later consolidation stages [20]. In addition, well understanding fixator stiffnesses could help to control interfragmentary motion during bone healing process [21, 22].

The titanium central body (A) of the new fixator (Fig. 1) is extension rod, which constructed in two parts: A-1 and A-2. The two parts slide in a groove (range 0-4 cm). The central body rotary nut controls this motion. Rotaring 360 degrees can be obtain a 1 mm of axial movement. On the one side of the central body is connected to the pin clamps (B and C). The material of pin clamps are titanium. They are composed of three parts (B-1, B-2, B-3 and C-1, C-2, C-3). On both sides of the central body, three components are connected with serrated discs. Serrated connection can effectively improve close link between fixator joints shown in Fig.1, thus enhancing the fixation between joint components. The unilateral external fixator has a limited adjustability [24]. But this novel fixator has greater adjustment ability, because the components of pin clamp (B-1 and C-1) allow 120-degrees rotation around the axis. Joint components of the B-2, C-2, B-3 and C-3 allows a rotational movement of 360 degrees in each directions show as in Fig. 1. The connector nuts on pin clamps are responsible for locking these joints by a torque wrench. Therefor this novel fixator not only has tight connections, but also has great regulation ability.

Fig. 1. The three-dimensional structure of the novel external fixator 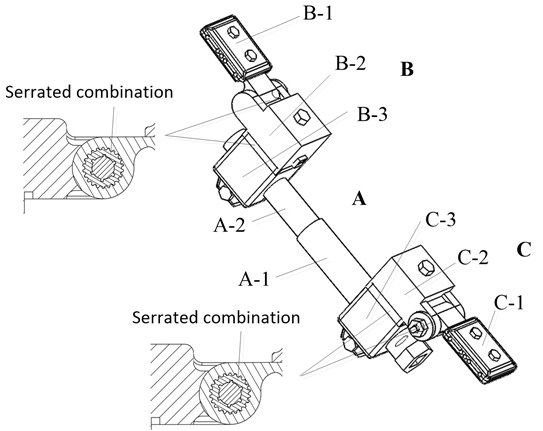 Compression testing was tested at the Laboratory, as shown in Fig. 3. At the Laboratory, the novel fixator was performed on the axial load by using a universal material testing machine. The novel fixator was attached to proximal and distal polyacetal bars. During the testing, the load (0 to 600 N at the rate of 5 N/s) is applied on the proximal tibia model and dixtal tibia model was fixed.

Torsional load test was carried out by the proximal bone model in relation to the fixed distal segment. The torsional test were subject to a maximum load of 15 N.m at the rate of 4 N/s. We put cylindrical bearing constraint at the end of the upper segment of bone model in the appropriate place as shown in Fig. 4.

The bending tests were conducted using a servohydraulic testing machine LFV-50-HH (Walter Bai, Switzerland; Fig. 5) with a maximum load of 500 N, which has DIGWIN 2000-EDC120 digital control system. The loading and unloading speed was 5 N/s during the test. 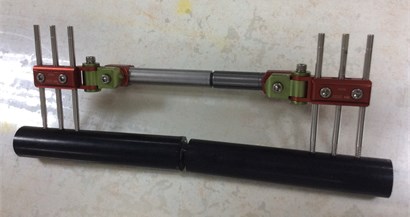 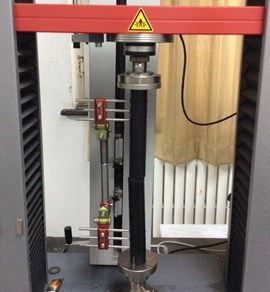 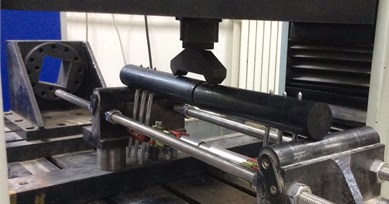 For both devices, measurements in compression, torsion and 4-P bending were measured ten times in order to enhance reliability. In every measurement, the whole device has to pull out six pins, and reassembled the entire fixator and bone model. Statistical analysis is adopted to use means and standard deviation calculation.

The measurement results in the ten experimental groups show a fair share of statistically significant differences.

As shown in Fig. 6, the force with a maximum of 600 N in axial direction applied in fixator side will lead to higher rigidity of the Novel fixator (4.15±0.2 mm), when compared with the Sarafix fixator (4.35 mm). And with a increase of the axial load, the axial displacements of two fixator systems are also increased. Compare the growth rates of displacements of two fixators, Although there is no obvious stiffness difference between two fixators, but the Novel fixator show a relatively lower rate of growth, indicate that the axial stiffness of Novel fixator (144.57±6.64 N/mm) is relative slightly higher than that of sarafix fixator (137.93 N/mm). 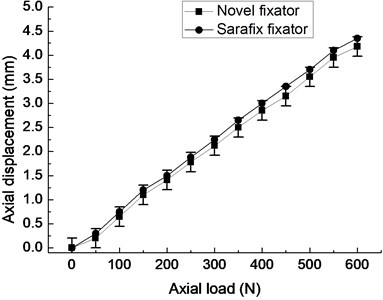 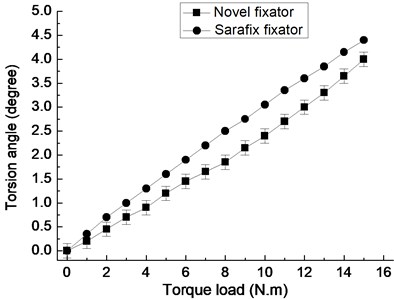 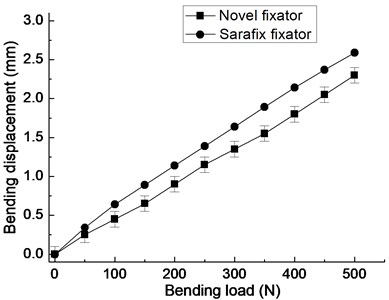 In this study, for sarafix fixator, the mean stiffness was only 95.407 % (axial load), 91.84 % (torsional load) and 86.87 % (bending load) compared with the novel Fixator. The novel fixator performed better than the Sarafix external fixator when applied bending load and torsional load, while no obvious difference was seen in axial loads for two fixators, as shown in numerical results of these two fixators. These results indicate that the novel unilateral fixator with serrated mechanism can improve the close connection between the joints of fixator, thereby increasing the stiffness of the fixator. The novel fixator has good stiffness properties mainly because of two reasons: the first one includes structural improvement in fixator, the second one is material improvement, we are committed to using new materials (titanium). These improvements help to reduce some problems related to application of the external fixator. In addition, good stiffness property make novel fixator is an useful method not only for fracture healing in orthopedic surgery, but also for war casualties.

This study also exists a lot of limitations, although experimental results of the novel fixator is favorable, but this should also be tested on the clinical experiment before a more practical and general conclusion can be made. So the novel fixator needs to be used in live animal or use in humans in the future. Nevertheless, the novel fixator still has sufficient stiffness to treat the injured tibia.

In conclusion, these results demonstrate that the structure of fixator plays an important role to improve the stiffness of the novel fixator system. Better understanding of an external fixator is crucial step toward its successful applications. These analysis results can also aid the performance assessment of a novel external fixator and facilitate appropriate application of such a device.