1, 2The School of Mechanical Engineering, Nanjing University of Science and Technology, Jiangsu, People’s Republic of China

Copyright © 2020 Yuze Ma, et al. This is an open access article distributed under the Creative Commons Attribution License, which permits unrestricted use, distribution, and reproduction in any medium, provided the original work is properly cited. 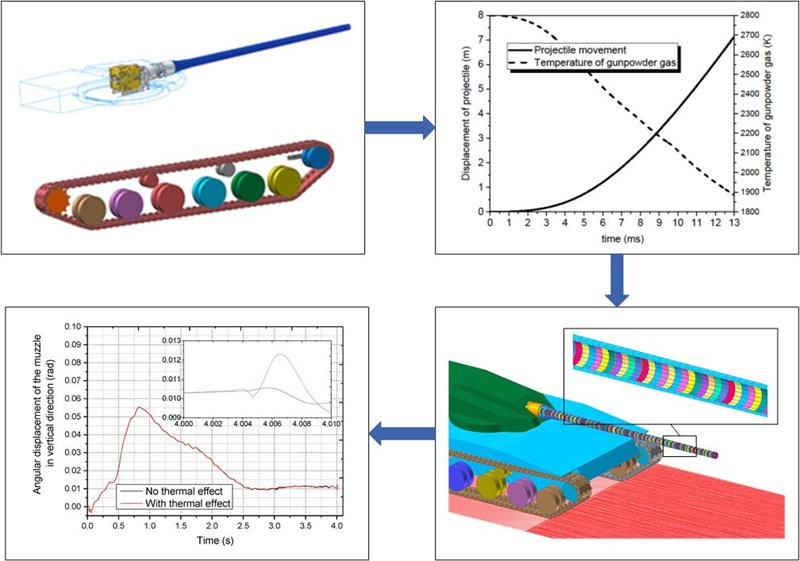 When the tank is shooting on the move, the inner wall of the tank barrel is continuously heated by the transient thermal pulse of the gunpowder combustion, which means that the temperature of the barrel rising rapidly, and the temperature of the inner wall of the barrel is significantly higher than other parts. The high temperature is not only the primary factor for barrel ablation, but also changes dynamic characteristics of the barrel, which causes the vibration during firing, and affects the attitude of the projectile out of the muzzle [1].

In the inner-ballistic period，the space behind the bomb is the area where the gunpowder and gas work, the dynamic response of the barrel is mainly determined by the effect of high-temperature gunpowder gas. Heat convection between the high temperature effect in the chamber and the inner wall, then, a certain temperature difference stress is generated. Fig. 1 is the dynamic effect of gunpowder gas, is the corresponding thermal shock load at time, is the time increment. The space behind the projectile gradually expands as the projectile moves axially, that is, the area of action depends on the position of the projectile.

The firing process is accompanied by complex thermal field changes, thermal convection between the high-temperature gunpowder gas and the inner wall of the barrel causes the temperature rising rapidly. During firing, the heat transfer in the inner chamber is conducted in three ways: conduction, convection and radiation. Pointed out that radiative heat transfer is about 1 % of convective heat transfer, so the effect of heat radiation is ignored. The physical model of the barrel’s temperature field can be expressed as:

1) The convective heat exchange between the high temperature gas and the inner chamber belongs to the transient temperature field [2]. The differential equation of heat transfer in the chamber in three-dimensional is:

where is density, is specific heat capacity, is temperature, is intensity of heat source, , , are thermal conductivity in three axes respectively.

2) Convection heat transfer between barrel surface and gunpowder gas, under the influence of external environmental factors, in this case, a third thermal boundary condition is used for description.

The inner boundary condition is:

the outer boundary condition is:

When we use the finite element method to solve differential equation, the temperature in the spatial discrete domain can be obtained by interpolation of the node temperature, which means that:

where is the shape function of nodes, is the node temperature. The finite element equation of the discrete transient temperature field is:

where is the stiffness matrix of temperature, is the matrix of instantaneous temperature changes; is the heat load vector of nodes.

As an example, a 125 mm tank gun is modeled by multi-body dynamics software RecurDyn, corresponding thermal loads and boundary conditions are applied, further, the dynamic response of the barrel and projectile during the shooting process of the tank is simulated. The numerical model is based on the following basic assumptions:

1) At any time, the parameters of the gunpowder gas after projectile are equal at any cross section, its unevenness of three-dimensional spatial distribution is ignored, and unburned powder particles are evenly distributed behind the projectile.

2) During the first shot, the surface temperature of the inner barrel is the initial room temperature, the powder gas pressure was set to 30 MPa [3].

Considering the complex structure of the components in the tank system, it is difficult to perform accurate 3D modeling directly in multi-body dynamics software, therefore, in the modeling of this paper, the rigid body components other than the track are selected to be modeled in CAD software, which are imported into RecurDyn through the software interface. The positional relationship of rigid components needs to be adjusted according to the topology, components are assigned corresponding material properties. The dynamic model of the tank firepower is shown in Fig. 2. Except for the recoil part and the cradle, the mass and moment of inertia of remaining components, secondary components involved in slewing motion, are equivalent to the turret.

The tracked chassis is used to reduce running resistance and ensure the high possibility of the tank on soft ground. However, the track device has many complicated components and structure, which has become a difficult problem in the dynamic modeling process. Toolkit > Track module is a professional track modeling module provided in RecurDyn software, which adopts a modular modeling method and can easily establish and modify three-dimensional solid models of road wheels, tug wheels, induction wheels, driving wheels and track shoes by calling component modules in the database. According to the actual size of each component of the track device, the model of the track on one side is shown in Fig. 3.

Fig. 4. The finite element model of the barrel

3.2. Application of temperature field in the barrel 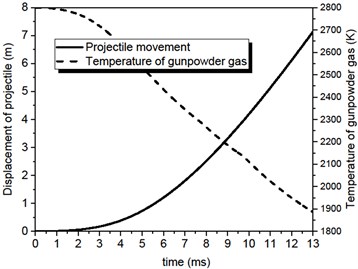 Gunpowder gas is an unstable turbulent flow in the barrel. Through forced convection heat transfer, high-temperature gunpowder gas passes through the thermal boundary layer to transfer heat to the barrel. This transient physical process can be defined using the contact boundary film module in Abaqus software. 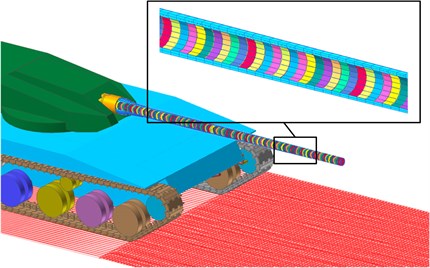 3.3. Modeling of rigid-flexible coupling of projectile

When the tank fires, the projectile moves along the barrel in a predetermined direction. Due to the gap between the barrel and projectile, contact with the inner wall of the barrel will continue to occur during the movement of the projectile bore. In the process of contact and collision, in addition to the normal contact force in the contact area, it is also subject to tangential friction. The tangential contact characteristics of the projectile rigid-flexible coupling model can be described by the friction model.

At present, the most widely used friction model is the Coulomb friction model. The friction force is considered to be proportional to the normal contact force , which means that:

where is the coefficient of sliding friction.

There is a certain gap between the description of friction and the actual situation based on the Coulomb friction model. In order to solve the friction state transition problem when the tangential velocity is zero during the contact collision process, we calculate the tangential friction force based on the following two formulas:

4. Kinetic response under the thermal load

The dynamic response combined thermal effect of the muzzle and projectile calculated based on the multi-body dynamics are shown in Figs. 7-8, the influences of road surface and thermal on barrel are mainly reflected in the vertical direction. The projectile was launched at 4 s. It can be seen that under the action of thermal load, there have been large fluctuations on the vertical displacement of the muzzle, and the posture of the projectile also changed greatly.

Fig. 7. Angular displacement of the muzzle in vertical direction 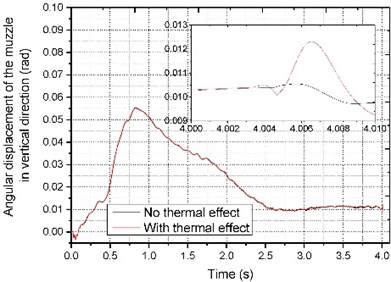 Fig. 8. Angular displacement of the projectile in vertical direction 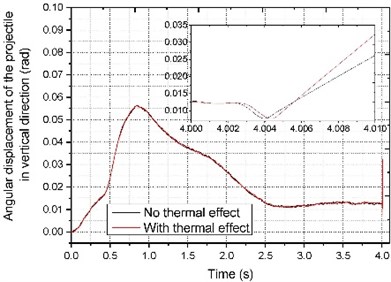 When the projectile is fired, part of the energy generated by the explosive detonation of the gunpowder will be converted into the kinetic energy, which propels the projectile forward, so that the projectile will obtain a faster launch speed; The other part of the energy will be converted into heat energy, which is transferred to the barrel through heat transfer methods such as convection and radiation, causing the temperature of the artillery body to increase. Under the action of gunpowder gas, the gun barrel will withstand a large thermal shock in an instant. The temperature rises and falls of the gun barrel wall are completed in a very short time, which will cause changes in the dynamic response of barrel and projectile.