Copyright © 2020 Aušra Gadeikytė, et al. This is an open access article distributed under the Creative Commons Attribution License, which permits unrestricted use, distribution, and reproduction in any medium, provided the original work is properly cited.

The intention of this study was to create a computational model in micro-scale that allows to imitate heat and mass transfer through three-dimensional textile layer with and without forced ventilation. The four ventilation rates were used 0, 0.2, 0.4 and 0.8 dm3min-1. Approximation of a unit cell geometry and heat transfer process were considered. The time-dependent and steady-state simulations are based on Navier-Stokes/Brinkman partial differential equations, and energy equation. A finite element modelling package Comsol Multiphysics was used for numerical simulations. The Laminar flow (.spf) and Heat transfer in fluids (.ht) modes were coupled with non-isothermal flow (.nitf) multi-physics. The post-processing analysis was done using Matlab software. The outcomes of simulation are temperature distributions, surface average temperature and relative humidity through the thickness of the representative volume. The results enable to create a macro-scale models for efficient simulation of heat exchange in textile packages.

Thermal protective clothing (e.g. firefighters clothing, winter outdoor clothing, ballistic protection clothing) usually has a multilayer construction [1, 2]. Each layer has a specific function. For example, the outer layer protects against environment, the middle thermo-insulating layer protects the human body from excessive heat loss, the inner layer (usually 3D textile layer) enables the moisture and air exchange between the body and the surrounding environment [1]. The air gap between the skin and the inner layer is referred to as the ‘microclimate’. It can influence heat and mass transfer from or to the body (e.g. protective clothing, where microclimate is typically thicker and therefore the natural convection is more likely to occur) [3]. Investigation and development of a multi-layer textile package require understanding of the coupled heat and moisture transport phenomena in order to describe thermal comfort of clothing during wearing. Thermal insulation properties such as thermal resistance, water-vapor resistance and air permeability are crucially important comfort-related properties of fabrics [1]. However, theoretical investigations of the physical behavior of multi-layer textiles are complicated due to complex internal structure, coupled heat and moisture transfer and other physical processes, which occur in different space and time scales [2]. Computational Fluid Dynamics (CFD) tools are often used for simulation of heat and mass transfer processes in different engineering applications [4]. CFD tools and advanced mathematical models usually based on approximation of the textile due to complex multi-scale geometry, knowledge of parameters that describe the properties of the textiles. Measurements often do not provide all necessary data and relationships or require the access to complex and expensive experimental facilities [2-5].

In recent decades various aspects of heat and mass transport through the fabric have been investigated. Neves et al. [5] focused on methodologies and experimental procedures that allow to determine parameters such as fiber fraction, tortuosity as well as mass and heat transfer coefficients that are required as input parameters for numerical studies. In subsequent work [6] Neves et al. proposed a numerical model for the analysis of heat and mass transfer through multilayer clothing. It enables to study textiles and fibers characteristics during physical activities with different intensities (i.e. heat/sweat release). Mayor et al. [7] numerically studied the transport phenomena across horizontal clothing microclimates with natural convection by using the finite element method. In this study the effect of different microclimate thicknesses, external air temperature, external air velocity, and optical properties of the fabric inner surface was analyzed. The model coupled the classical set of continuity, momentum (Navier-Stokes) and energy equations in order to describe transport phenomena that occur in the simulation domain [7]. Siddiqui et al. [8] used the conjugate heat transfer model for investigation of heat transfer from hotplate to plain weft knitted fabric. Boussinesq approximation was used for the analysis of buoyancy-driven natural convection. The simulation was carried out using Abaqus software. The effective thermal conductivity and thermal resistance of the plain weft knitted polyester fabric were predicted [8]. Santos et al. [3] performed 2D transient simulations of air flow and heat transfer around a clothed human limb in the horizontal position. It was found that velocity, temperature and heat fluxes were dependent on the microclimate thickness. Angelova et al. [4] proposed a numerical model for simulation of the heat transfer through woven textiles by the jet system theory. A computational model was based on the Reynolds averaged Navier-Stokes partial differential equations (RANS), and the energy equation that was used together with - and RSM turbulence models. It was found that porosity of the woven macrostructure strongly affects the heat transfer. Simulations were carried out with Fluent CFD software package [4]. Puszkarz et al. [9] carried out computer simulation to study the performance of multilayer textile assembly exposed to heat radiation. The model was built using Solidworks Flow Simulation software that allowed to couple energy conservation equations and Navier-Stokes equations. The computational model outcomes were the transmitted heat flux density, the heat transmission factor, and the radiant heat transfer index that portrayed a good agreement with experimental data [9].

The aim of this study is to develop a computational model that predicts average temperature and relative humidity values through 3D textile using different ventilation rates, where ventilation flux is parallel to the layer and is directed through the air gaps of the 3D textile structure. The model was built using Comsol Multiphysics software.

2. Mathematical model of heat and mass exchange through 3D textile

One of challenges using CFD tools is to obtain proper geometry approximation (homogenization of air and fibers) in order to save computational time simultaneously avoiding the meshing problems due to complex internal structure of the fabric. For this reason, in our previous work [10] a single-layer woven fabric was analyzed by numerically simulating air permeability and water vapor resistance tests. As a result, the model of 3D textile layer was constructed that consists of two simplified layers coupled with spacer yarn. The results portrayed a good agreement with experimental [11] and literature data [2].

The single-layer textile geometry was recreated in accordance with actual construction parameters measured by Zupin et al. [11]. Air permeability test was performed with the Air Permeability tester FX 3300 Labotester III (Textest Instruments) according to the ISO 9237:1995 (E) standard. The pressure difference was set 200 [Pa] on an area of 20 cm2 [11]. The local permeability of yarns was calculated by using the Gebart model. More details about local permeability calculation are presented in [12]. The water vapor resistance test was performed with The Sweating Guarded Hot Plate M259B according to the LST EN 31902:2002 / International standard ISO 11092:2014. Our numerical simulations were based on Navier-Stokes and Brinkman equations together with the continuity equation. Summary of experimental and computational values of air permeability and water vapor resistance are shown in Table 1. In this work the geometric model of a unit cell of 3D textile layer is used as created in our previous work [10].

Different meshes (normal 502188, coarse 271751, coarser 127480, extra coarse 65740, and extremely coarse 43311) were adapted for simulation in order to find the grid-independent solution. It was found that a minimum number of finite elements was 65740. The extra coarse mesh that was used in simulations is shown in Fig. 1.

Thermal energy equation (Eq. (4)) in the fluid region was expressed as:

The boundary 3 represents skin with a constant temperature of 37 ℃. Three different mass flow rates (0.2, 0.4, 0.8 dm3min-1) of ventilation layer (boundary 1) were considered. The covective heat transfer coefficient 8.4746 W/(m2·K) of three-dimensional textile layer is based on measurements according LST EN 31902:2002 standard [2].

Fig. 3. Simulation results of 3D textile layer. Distribution of the temperature with ventilation rate of 0.8 dm3min-1 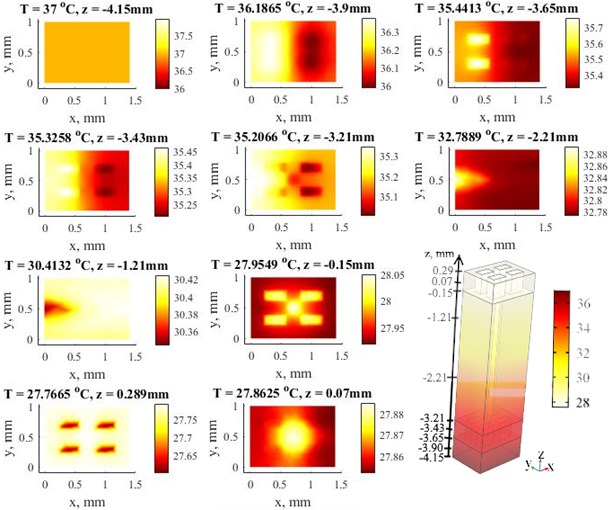 Fig. 4. Time relationships of average temperatures in the middle of microclimate gap at four different values of the ventilation rate 0, 0.2, 0.4 and 0.8 dm3min-1

Fig. 5. Time relationships of average temperatures in the outlet at four different values of the ventilation rate 0, 0.2, 0.4 and 0.8 dm3min-1 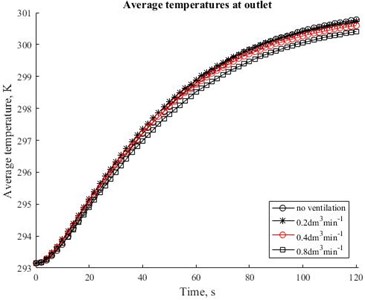 Fig. 6. Time relationships of average relative humidity in the middle of microclimate gap ( position –3.9 mm) at four different values of the ventilation rate 0, 0.2, 0.4 and 0.8 dm3min-1 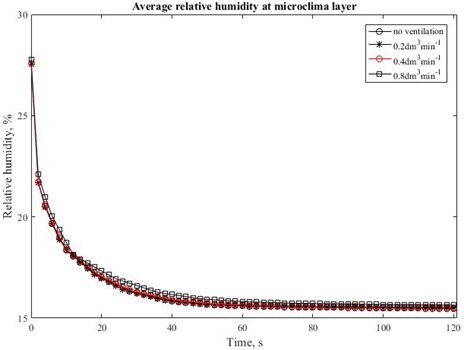 A computer simulation was conducted on the heat and mass transfer in micro scale using Comsol Multiphysics software. The numerical simulations were performed as stationary and time dependent. The first study is dealing with distributions of the air temperature that can be depicted in whole computational domain. The time dependent study concerns relative humidity effect, the thermal performance of three-dimensional textile exposed by ventilation rate. This study shown that relative humidity is dependent from ventilation rate. The input parameters of simulation were based on experimental and literature data. The findings such as relative humidity, surface average temperature that is required parameter for determination of thermal resistance can be applied in macro-scale models for efficient simulation of heat and mass exchange through textile packages.