Copyright © 2021 Bo Zhang, et al. This is an open access article distributed under the Creative Commons Attribution License, which permits unrestricted use, distribution, and reproduction in any medium, provided the original work is properly cited.

Recently, there has been growing interest in active control technology of the nonlinear aeroelastic system, which suppresses and alleviates aeroelastic problems via control surface on the wing. Active flexible wing (AFW) technology, which uses a nonlinear programming technique and an analogy with linear quadratic Gaussian solution, is developed to suppress the flutter. The general method is applied to synthesise an active flutter suppression control law for an aeroelastic wind tunnel wing model. Experimental results show that the AFW technology can successfully suppress the flutter [1-4]. Active aeroelastic wing technology, which uses wing aeroelastic flexibility, integrates aerodynamics, active controls and advanced technology structures to maximise aircraft performance, and its key aspects were tested on an F/A-18 testbed [5]. However, these studies do not consider the effect of nonlinear factors, and this nonlinearity may cause various aeroelastic phenomena, such as limit cycle oscillation (LCO), bifurcation and chaos [6, 7].

A globally stable nonlinear adaptive control method, which uses partial feedback linearization techniques, was proposed to suppress the LCO of a typical airfoil section with structural nonlinearities [8]. Vipperman et al. investigated and tested an active control method for a typical wing section, which utilizes the models obtained from system identification [9, 10]. A compensator, which uses the linear quadratic Gauss optimization scheme, was designed to suppress the LCO caused by the freeplay nonlinearity of the control surface [11]. However, the bifurcation structures, which are widely existing in the closed-loop control system, will affect system stability [12]. In the past few years, many researchers have focused on robust control to improve the stability of the control system [13, 14]. Modern control theory, which is based on state space method, requires the establishment of an accurate mathematical model of the controlled object. Influenced by uncertainties of the control system, including the accuracy of unsteady aerodynamic calculation, the error of structural dynamics modelling and the group delay of filters in control loops, modelling aeroservoelastic systems is difficult, which adds complexity when designing the control law of active flutter suppression.

Fuzzy control does not require a precise mathematical model of the controlled object and is suitable for complex control systems that are difficult to model. Fuzzy logic control has been widely used to control the nonlinear systems [15-19]. In recent decades, fuzzy control has been applied to aeroelastic system control. An adaptive decoupled fuzzy sliding-mode control is derived to control the plunge and pitch motions of an aeroelastic system [20, 21]. Li proposed an aeroelastic system LCO suppression method via an adaptive fractional-order fuzzy controller [22]. These studies have shown that the fuzzy control algorithm is better than the traditional control methods. However, the fuzzy control algorithm, which must constantly adjust the control rules, is difficult to optimize and the debugging cycle is long when it is applied to a complex or time-varying controlled object.

This article is organized as follows: Section 2 introduces a prototypical two dimensional wing section with freeplay in the pitch, which adopts a single trailing edge flap as the control input signal. In Section 3, the framework of adaptive neuro-fuzzy control for the nonlinear aeroelastic system is presented. Traditional proportional integral differential (PID) controller is used to generate the initial control parameters. Takagi-Sugeno (T-S) [23] model is adopted to construct the fuzzy logic system. Neural network is used to identify the fuzzy control rules. In Section 4, the proposed algorithm is tested by two sets of numerical experiments: a nonlinear aeroelastic system without measurement noise and the other one with 20 dB measurement noise. Finally, conclusions are drawn in Section 5.

Following the strategy employed in Reference [24], we seek to adopt the simplest representation of the aeroelastic system as possible. Fig. 1 illustrates a schematic of the prototypical 2D wing section with a control surface at the trailing edge of the main wing. 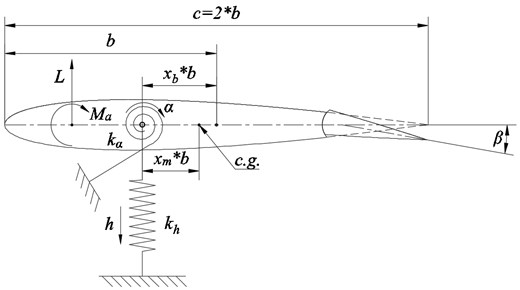 In this system, represents the airfoil chord; is the semi-chord of the wing section; and represent the plunge and pitch of the main wing, respectively; indicates the flap of the control surface; is the non-dimensional distance between the mid-chord and elastic axis; represents the non-dimensional distance between the mass center and elastic axis; and denote the stiffness coefficients of the wing in plunge and pitch, respectively; and and refer to the quasi-steady aerodynamic lift and moment of force, respectively.

The governing equations of motion for the structure of the nonlinear aeroelastic system can be written as follow:

where represents the mass of the wing section; is the moment of the inertia about the elastic axis; and represent the structural damping coefficients of the wing in plunge and pitch, respectively; and is the moment–rotation relationship of pitch angle (). The moment characteristic of a symmetrical freeplay nonlinear system is expressed as:

where is the system gap.

and refer to the quasi-steady aerodynamic lift and moment of force, which could be modeled as follows:

Then, the governing equations of motion could be written as follow:

The transformed equations of motions in the state space form become:

Fuzzy logic control is a computer digital control method based on fuzzy set theory, fuzzy linguistic variables and fuzzy logic inference. This method is an important and effective form of intelligent control. Fuzzy control does not depend on the precise mathematical model of the controlled object, and has good robustness and adaptability. This method is especially suitable for controlling nonlinear, time-varying, delayed and model-incomplete systems. Due to the complexity of the nonlinear aeroelastic system, it is difficult to get the predefined model structure of the variable characteristics in the system. Adaptive neuro-fuzzy control, which is based on the neural network identification algorithm, utilizes the strong learning capability of the neural network, the direct processing ability of quantitative data and the strong structural knowledge expression capability of fuzzy logic. Fig. 2 shows the flow chart of adaptive neuro-fuzzy control for the nonlinear aeroelastic system. 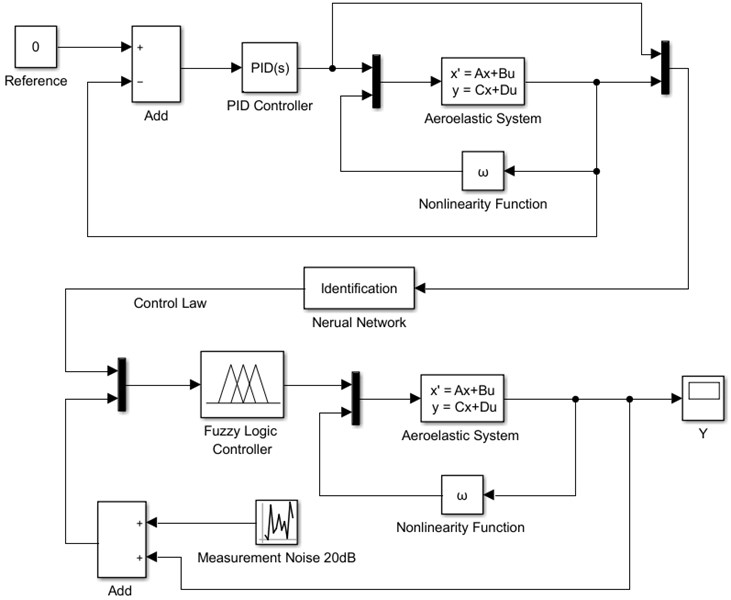 The input signal of the PID controller is the difference between the system feedback and reference signal. The purpose of the controller is to suppress the LCO of the aeroelastic system, which requests the reference signal to be the constant signal (). Nonlinear function is used to simulate the system nonlinearity. The input signals of the adaptive neural network are the control and output signals of the PID control system, and the control law of the fuzzy logic control system is obtained after the training of the neural network. Finally, a fuzzy control system is used to control the nonlinear aeroelastic system.

The key point of fuzzy logic control is to map the input space to the output space. The main mechanism for achieving this goal is a list of If-Then statements called rules. Fuzzy inference refers to the process of mapping a given input to an output by using fuzzy logic. The fuzzy inference process comprises five parts: fuzzification of the input variables, application of the fuzzy operator (AND or OR) in the antecedent, implication from the antecedent to the consequent, aggregation of the consequents across the rules and defuzzification.

Mamdani [25] and T-S are the two commonly used fuzzy inference models. The Mamdani model is among the first control systems built using fuzzy set theory, and its advantage is intuitive. However, this model expects the output member functions to be fuzzy sets, which must be defuzzified for each output variable after the aggregation process. The T-S model is a more compact and computationally efficient representation than the Mamdani model, and it is suitable for optimization and adaptive technology. The fuzzy inference system in this study adopts the T-S model.

The T- model of a dual-input-single-output system with fuzzy rules is shown as follows:

where is the basis of fuzzy rules and denotes the th rule, which can be written as:

where and are the inputs of the fuzzy inference system, indicates the output of the th fuzzy rule, and denote the fuzzy sets of the th rule and , and are constants, the values of which are determined by identifying from a large number of input-output test data of the system. For the zero-order T-S method, the output value is a constant.

The output of the control system is the weighted average value of the output of all single rules:

4.1. Results of the PID controller

PID control is the earliest and most widely used method in automatic control. In this study, the PID controller is utilized to generate the original data for the neuro-fuzzy control. The inflow velocity is set to = 11.6 m/s. The response results of the PID control system of the gap nonlinear aeroelastic system are obtained, as shown in Fig. 3.

Fig. 3. Response of the aeroelastic system: a) plunge direction and b) pitch direction

Fig. 4. Pitch direction phase diagram of the system: a) without controller and b) PID controller 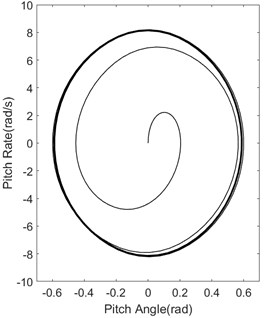 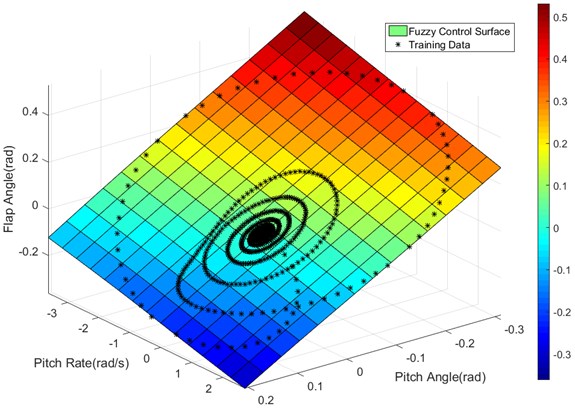 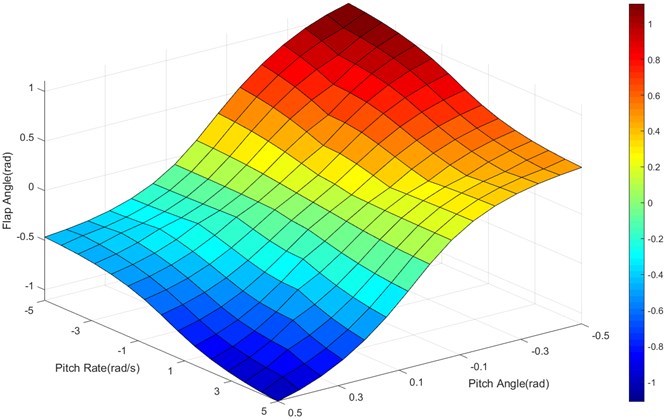 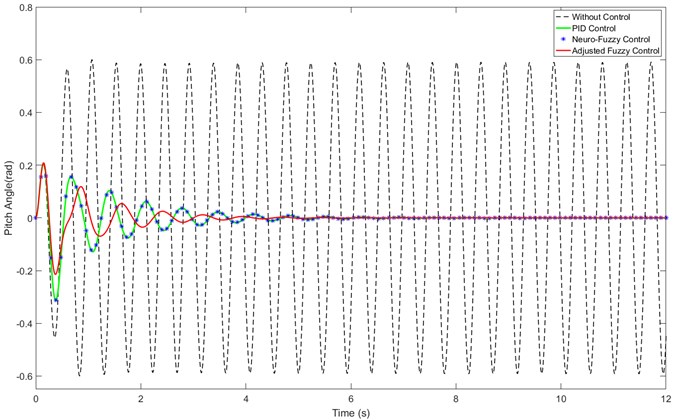 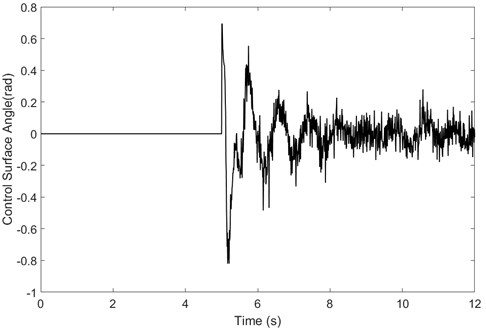 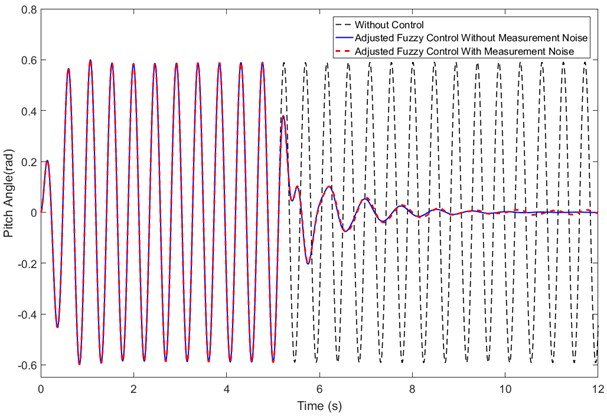 2) The established control method is easy to optimize and no need to constantly adjust the control rules when used to suppress LCO of nonlinear aeroelastic systems with measurement noise.

This work was supported by National Natural Science Foundation of China (Grant No. 11472133).