Copyright © 2020 Krishnareddy G, et al. This is an open access article distributed under the Creative Commons Attribution License, which permits unrestricted use, distribution, and reproduction in any medium, provided the original work is properly cited.

This paper is focusing on diagnosis for longitudinal and radial vibrations of turbomachinery coupled with induction motors. In this context, extensive field vibration measurements are conducted and analysed to identify the source of predominant vibrations on rotor bearing system in a chosen centrifugal compressor in the radial and longitudinal directions. As a first step, the measured overall vibration levels at multiple locations on bearing surface are compared with the existing ISO standard limits. These measurements showed severe longitudinal vibration values and failure of thrust collar assembly which were not considered in turbomachinery (API) design standards. The second step in diagnosis for vibration spectrum measurements are conducted both in longitudinal and radial directions during transient and steady state operations to find the vibration source and thrust collar assembly failure mechanism. This study on vibration diagnosis and analysis on turbomachinery is useful in correcting the severe longitudinal vibrations and damage control measures and corrections associated with static eccentric airgaps through motor air gap diagram.

Centrifugal compressors were designed as per API 617 [1] including fluid mechanics, machine elements and assembly. The standard evaluates lateral and torsional critical speeds, identifying the amplification factors at resonance and correlation with the unbalance response and limiting the response within sealing clearance and vibration response at all the planes of bearings should be within allowable values as per specification. For meeting the API 617 requirements; API 684 standard [2] provides a methodology for lateral and torsional dynamics by lumped parameter model analysis and balancing procedures for turbomachinery.

ISO 13373-(1, 2) in reference [3] standards describes the transducer selection, installation location places, measurements processing, analysis and data presentation for condition monitoring and diagnosis purposes. ISO 10816-3 and VDI 2056 -3 [4] evaluates the vibration severity on the stationary bearing surfaces. Similarly, ISO 7913-3 and VDI 2059-3 [5] contain a shaft vibration evaluation at orthogonal planes. These standards are used to find the monitor vibration levels and assess the status of the turbomachinery in service. However, these standards are not being mentioned about the longitudinal vibrations. But it is very important to study the longitudinal vibrations for turbomachinery coupled with induction motors having with skew rotor bars. W. T. Thomson [6] studied the induction motor failures correlating the air gap eccentricity for radial vibrations.

Shekhawat Narendra [7] studied the effect of eccentric air gap on radial vibration by using Finite Element Methods (FEM) and compared with the motor current signatures. Sequent study made by C. E. Bradford and R. G. Rhudy [8] on axial magnetic forces in induction motors and demonstrated that the total axial forces are the sum of rotor bar skew force and air gap magnetic energy variation. According to the current literature survey, a vibration diagnosis is conducted for coupled systems to understand the effect of longitudinal vibrations and connected thrust bearing assembly damages. Thereby, the manuscript was considered for turbomachinery coupled with the induction motor in sour gas service and had severe vibrations while operations.

where, vibration acceleration (), velocity () and displacement () are the responses of the system and is the periodic vibration forcing function. The vibration forced response is from the system in particular solution follows shown in Eq. (2) and is the basis for diagnosing the turbomachinery coupled with induction motor rotor bearing system. In real sense, forces including mechanical, electrical and aerodynamic exciting the system:

where, is the vibration response of the system, is the angular rotation frequency and is the frequency dependent phase angle between force and response. Diagnosis on turbomachinery for chosen centrifugal compressor coupled with the induction motor description is given below for vibration measurements and analysis.

Generally, turbomachinery designed as per API 617 [1] which considers the radial vibrations and longitudinal forces as constant axial thrust. However, turbomachinery coupled with induction motor shows both longitudinal and radial vibrations. The effect of longitudinal vibrations needs to be studied for fault diagnosis. So, a configuration of single stage centrifugal gas compressor coupled with squirrel cage induction motor construction is chosen for further experimental study. Fig. 1 shows a schematic diagram of chosen turbomachinery configuration. The components mounted on the shaft are impeller, thrust collar and gear coupling hub. Both the driver and the driven shafts were coupled by float end gap gear coupling. The rotor system was supported radially on the compressor side with two lobe journal bearings housed in the compressor casing and similarly the motor rotor was supported with symmetrically plain sleeve bearings. The entire rotor system is axially located by thrust bearing assembly with a tilting pad bearing mechanism which has active and inactive sides for load bearing surfaces. The complete system installed on the rigid foundation. Table 1, shows the operating conditions and specifications of the turbomachinery configuration.

Fig. 2 shows the field observations during maintenance of turbomachinery. It can be observed that surface frettage wear is available at shaft mounting locations, collar surfaces and keyway failure. Similar failure observations were mentioned by W. T. Thomson et al., in the Induction motors [6]. To understand the failure mechanism, the vibration measurements are studied on sample turbomachinery coupled with an induction motor. Fig. 1 shows the vibration measurement locations which includes four journal bearing locations and thrust bearing. Vibration velocities in three directions were measured successively on bearing housings with uni-axial accelerometer having the sensitivity of 50 mV/g. A proximity probe with the sensitivity of 8 mV/µm is used to measure thrust bearing displacement. Shaft radial vibrations are measured using eddy current probes as per API 670 standard. 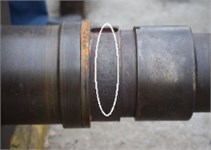 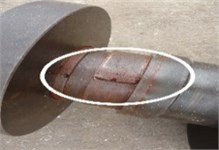 b) Damages in thrust assembly mounting 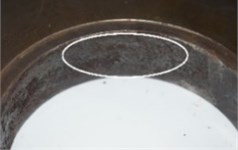 The measured overall vibration velocities (in rms values) on bearing housing surfaces in the vertical, horizontal, and longitudinal directions are given in Table 2. The measured vibration levels for the above turbomachinery exceed the allowable limits according to the standard ISO 10816-3 and ISO 7919-3 for couped industrial machines classification. the allowable vibration velocity for group I machinery with power rating above 300 kW and installed at a rigid support is up to 2.8 mm/s rms, and its exceedance causes damages to the machine [4, 5]. During testing, the allowable shaft vibration depends on a speed according to the standard API 617. For a speed of 3000 rpm, the allowable displacement value is 50.8 µm (peak to peak). The overall vibration is exceeded the allowable values. Hereby, a detailed spectrum analysis was carried out to find the root cause to identify the vibration source. In this regard, Table 3 shows the measured vibration spectrum and peak to peak amplitude at location 3, that means peak-to-peak vibration amplitude is predominant at 1X in all three directions. the measured spectrums at location 3 is only shown in the manuscript for severity, but the same data is available for other locations also. From this, it was observed that motor bearings (3, 4) are demonstrated higher amplitude of vibrations and spectrums with the dominant frequency at a synchronous rotating speed of the motor. Similarly, the longitudinal vibrations at location 3 presented in Table 3 produced in the tune with the vibration amplitude other directions and the thrust force generated in the motor rotor skewed bar and combined static eccentric air-gap effect as discussed in the reference [7, 8].

Shaft vibration responses in radial direction under steady state conditions at four bearing locations in two different transverse planes (XX, YY) are measured by using eddy current probes according to ISO standard [3]. Table 5 shows the measured spectrums, dominant frequency, and peak-to-peak displacement amplitude. The measured vibration displacement values are exceed the allowable limit of 43.82 µm. It is also observed that at all four locations, the shaft vibrations peak amplitude is synchronous with rotational speed. Bradford et al [8] discussed that the electrical excitations caused magnetic energy variation in the induction motor due to variation in static air gap eccentricity, which is the root cause for radial and longitudinal dynamic force. These longitudinal vibrations created the micromotion at the thrust collar mounting and frettage wear observations as shown in Fig. 2. The motor nominal air gaps identified as 3.82 millimeter and static air-gap eccentricity measured is vary from 3.41 mm to 4.23 mm as shown in Fig. 4(a). The similar turbomachinery was taken to verify the effect of static air gap eccentricity and the measured static eccentricity variation is from 3.6 mm to 4.04 mm as shown in Fig. 4 (b). The measured overall vibration values for this turbomachinery are within the allowable range as shown in the Table 3 and is demonstrated that less magnetic energy variation reduces the vibration response. Thereby, it is suggested to correct the static eccentric air gaps to obtain uniform values in the motor assembly as shown in Fig. 4(c).

The present paper has discussed the vibration diagnosis of thrust collar failure in a turbomachinery coupled with induction motor. The measured overall vibration values at bearing locations are compared with ISO limits and found the allowable values exceeded at the motor bearing locations. The detailed spectrum analysis and shaft displacement measurement showed the dominant vibrations in the longitudinal and radial directions at a rotational speed. Vibration analysis indicates these vibrations are occur due to static eccentric air gaps with inadequately equalised magnetic pull and are synchronized with the speed. These excessive longitudinal vibrations cause thrust bearing assembly damages and amplified radial vibrations as a result of static air gaps with unbalance magnetic pull. The present study focussed on understanding the effect of longitudinal vibrations and inferred with static air-gap eccentricity variation in the turbomachinery coupled with induction motor and obtained the minimum vibration levels by correcting static air-gap variation to uniform values for improving machinery availability.